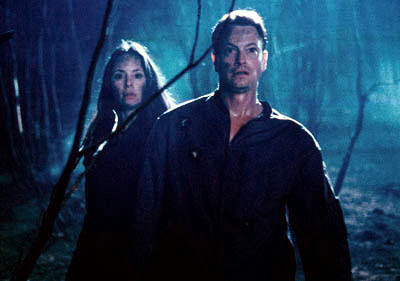 Like the cinematic garbage it has been modeled after, "Impostor" begins not with us gazing up at the opening credits, but rather with a perplexing and ill-fated past that eventually lead up to this theatrical release. Reportedly sitting on shelves collecting dust as far back as early 1999, the movie was originally intended to be a 40-minute opening segment to a film called "The Light Years Trilogy," a project that was later canceled for unspecified reasons. But Miramax, the studio backing the making of the film, was so impressed with the "Impostor" segment that they encouraged the director to lengthen it into an 80-minute stand-alone feature. Ever since that proposal was met, however, the studio has been unable to decide what to do with the final product; in fact, release dates have been changed and delayed so many times in the recent past, it makes the dragged-out discharge of 2000's "Lost Souls" look almost tame in comparison. Signaling their apparent regret in demanding that a story with 40-minute material be stretched into a much-longer product, Miramax eventually dropped their bomb, disclosing it at a time when audiences expect nothing short of total clunkers at the cinema.

The result is this, a movie so bad that it almost has to be seen to be believed. It's a flimsy, exhausting, inane product constructed with all the incisiveness of a soggy pancake, and yet one where the material doesn't even look suitable for the shorter feature it was intended as. When the film opens in the year 2079, we are dealt the details regarding the current desolate condition of a scarred planet Earth, in which a race of alien beings from the planet Alpha Centauri have been at constant war with humanity, resulting in their retreat to large and heavily-secure cities for survival. But those facts are also given to us amidst a view of incredible darkness, with visuals that appear so muddled and murky that it's as if the special effects supervisor purposely turned the contrast down to hide even bigger mistakes. No respectable feature could possibly survive under this ambiguous sense of style; in fact, if "Impostor" had managed to get its point made in only 25 minutes, the texture would still detract us from its potential merits.

The film's center is Spencer Olham (Gary Sinise), a weapons specialist who has just completed designing artillery for the government that could give them the upper hand in their face-off with the enemy aliens. A fear is existent, however, that the aliens themselves have killed the real Olham and replaced him with a machine that looks and acts like a real human being, also supplying him/it with an internal bomb that would assassinate a crucial member of the government. Fearing these factors have manifested, an investigator named Hathaway (Vincent D'Onofrio) has Olham apprehended and orders an immediate execution, with no trial or tribunal of any sort preceding the demands (although given the state of this apocalyptic future, we realize lengthy hearings of this sort may be inappropriate for someone accused of having explosive material imbedded in his body).

Naturally, Olham is outraged at the claims that he is only a genetic replica of a former human being. In attempt to prove his innocence to the government (not to mention the viewer, who has the wool pulled over his or her eyes until the climax), Olham makes a quick getaway and meets up with a rebel named Cale (Mekhi Phifer), a mysterious guy who agrees to sneak the fugitive into a city hospital for a DNA test in order to determine his true identity.

The bulk of the story plays almost completely out a mere 35 minutes into the film, leaving an enormous hole from that point until the end in that is hopelessly padded with second-rate chase scenes, walks through dark and narrow corridors, pointless dialogue exchanges and fragmented character arcs. A person who chooses to leave for the concession stand at the theater during this time period shouldn't fear long lines; the material contained in this section is transparent and dreary, lacking the slightest focus and a shred of importance.

The acting, meanwhile, comes of as some of the most despairing in the careers of these fine actors. Sinise seldom has the opportunity to play a front-burner part in major motion pictures (his more known performances are in supporting roles), but this is not the right way to break into the spotlight. His Olham persona is the most thankless, emotionless and uninteresting sci-fi hero of the new millennium. Similar problems exist for Madeleine Stowe, who plays the diminutive role of Olham's spouse with the look and attitude of an extremely frustrated actress. Vincent D'Onofrio, meanwhile, forces upon us this insipid Hathaway character, a man who speaks at the audience as if it were a group of brainless drudges, sometimes describing things that are even seen clearly on screen and need no elaboration. His ramblings are some of the biggest "No duh!" speeches I have seen since John Ashcroft began talking as this country's Attorney General.

You may be intrigued to know what actually happens in the final moments of the film. You might not even care. But in either case, the payoff doesn't matter in the least, as "Impostor" does nothing useful enough with its material to even deserve a positive response to its climax. But just imagine what could have come of this material had it actually been treated with some level of interest. It could have been a very amusing feature. Heck, the visual effects artists might have even had the courage to actually let us see the visuals, too.