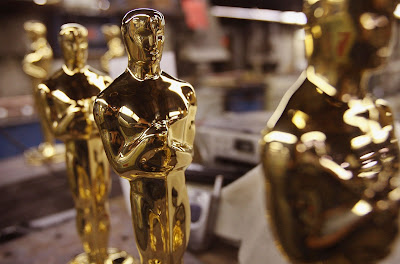 All questions will be answered Tuesday morning when the nominees for the 74th annual Academy Awards are introduced. But the time leading up to the announcement will not be patiently endured by many of us movie fans, who have spent the recent weeks sitting in movie theaters to catch up on all the big potential contenders. Anxiety and frustration will surely be felt among those of us who hold on to the hope of having our favorite films nominated, while industry analysts and movie reviewers will feel the pressure of trying to predict what will be announced as this year's Oscar nominees. But this is all part of the excitement of awards season, you might say.

Though we won't know the official answers for a few more days, the list of predictions compiled below should provide a clue as to what pictures will not likely be forgotten on the final ballot.

Best Picture
Likely Nominees:
A Beautiful Mind
Black Hawk Down
In The Bedroom
The Lord of the Rings: The Fellowship of the Ring
Moulin Rouge
Long Shots:
Gosford Park
The Man Who Wasn't There
Mulholland Drive

The Academy's Best Picture selections will likely be split between 2001's most distinctive films: a movie musical, a war picture, a fantasy epic, a family drama and a biography. Of the five listed above, only "Black Hawk Down" appears to be iffy, especially given the state of fear amongst Americans with the current war on terrorism (does the Academy, after all, really want to recognize a movie that deals with a failed military mission?). Should it be forgotten, chances are the Academy will go for the Coen brothers' film noir endeavor "The Man Who Wasn't There." But if they're smart, they'll remember two of the year's best and most overlooked: either Robert Altman's "Gosford Park" or David Lynch's "Mulholland Drive."

Past examples have proven typically that only four of the five picture nominees will see their directors nominated as well. This may be good news for Robert Altman, who has never won an Academy Award, and whose "Gosford Park" probably won't be remembered much past technical nods. Should his much-deserved recognition be ignored (and it's very possible, what with the Director's Guild of America failing to nominate him last month), the Academy could play it safe with either Joel Coen or Steven Spielberg. David Lynch is this year's dark horse, but like Altman, he has a wonderful movie that will be severely overlooked elsewhere; the Academy just might even sneak him in.

Here we have the most difficult race of all major Oscar categories. Unlike Best Picture or Director, where at least three or four of the nominees appear to be anchored choices, the Best Actor category contains only two surefire nominees: Russell Crowe and Gene Hackman, who both have been consistently recognized this year for their roles in "A Beautiful Mind" and "The Royal Tenenbaums." Billy Bob Thornton, who was in three successful films last year, probably won't be forgotten either, but the fact that he had more than one solid role in 2001 could cancel his chances out. Meanwhile, Tom Wilkinson's "In The Bedroom" efforts are overlooked because of the much-hyped performance of Sissy Spacek, and Denzel Washington suffers for having a solid performance in an unmemorable picture. The vulnerability of the last two mentioned choices could spell victory for either Sean Penn and Will Smith, two actors who have been continually noted recently for providing standout performances in somewhat mediocre offerings. There is even a very slight chance for James Cameron Mitchell to squeeze in, as his portrayal of a singing transvestite in "Hedwig and the Angry Inch" earned him incredible praise.

Familiar names will dominate the Best Actress category, but don't be surprised if newcomer Naomi Watts is among the list of nominees on Tuesday. Because "Mulholland Drive" won't see much (if any) acknowledgment in higher categories, Academy voters will feel obliged to honor the movie somewhere, and the best solution would be to give its star a much-deserved nod here. Nicole Kidman, meanwhile, will be remembered for her "Moulin Rouge" performance rather than her one in "The Others," which was hyped too early and became erased from memory just as the former hit store shelves. The long shots for this category include Thora Birch, Tilda Swinton and Renee Zellweger, but since this category is pretty much a sure thing for the other potential nominees, their chances are drastically dwindled.

Best Adapted Screenplay
Likely Nominees:
A Beautiful Mind
Ghost World
In The Bedroom
The Lord of the Rings: The Fellowship of the Ring
The Shipping News
Long Shots:
Ali
Black Hawk Down
From Hell

FINAL WORD
If the Academy voters play their cards right, then "The Lord of the Rings" and "Moulin Rouge" could easily walk away with the most nominations of the year—maybe even 11 or 12 a piece. These were the year's biggest technical achievers, but also two of the most successful and memorable endeavors in the eyes of audiences. They're hype has yet to die down.

"A Beautiful Mind" will likely follow in their footsteps—earning around 7 or 8 nominations—while "Gosford Park" and "In The Bedroom" could follow closely behind. In general, however, results will probably be splintered; unlike the previous years, 2001 was a time when cinema was all over the map, resulting in a series of great movies that had little or nothing in common with one another.