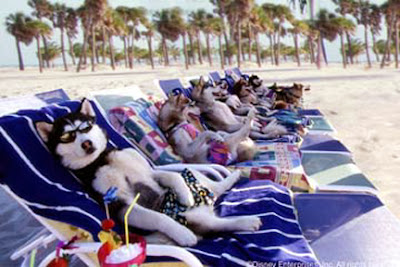 When the lights go down in the theater that is showing "Snow Dogs," the mind is immediately flooded with prospects of "Cats and Dogs"-style animal effects, in which normal four-legged pets are effortlessly warped into english-speaking intellects with an edge on cunning behavior and witty reasoning. Such a perspective has been used as the primary advertising tool behind this live action Disney vehicle, but like so many campaigns of the recent past from the infamous Mouse House, the delivery is more deceitful than valid. In fact, the movie contains only one major scene featuring animals engaging in human discussion, and it's strictly a dream sequence, lifted from a story centered on not charm or amusement, but cringe-worthy standards and feel-good tones that could pass off as leftover treats from Disney's recent past live action endeavors. No, this isn't even a movie we can enjoy as mild escapism; it is one in which fear and frustration are provoked to intolerable levels.

The movie stars Cuba Gooding Jr., a fine actor who, unfortunately, appears to be headed for cinematic meltdown (as previewed by his appearances in "Men of Honor" and "Pearl Harbor"). He plays Ted Brooks, a Miami dentist who suddenly discovers that the mother he's known all his life (a chronic cookie-baker played by Nichelle Nichols) is actually adoptive, and that his biological parent has recently died and left him an inheritance. Summonded to Alaska for the reading of her Will, Ted packs up and leaves behind the sunny beaches of southern Florida for the frigid slopes of the mountanous arctic state, where he meets a town full of eccentrics that, in one way or another, are connected to his mother's "fortune." Among the established supporting players are Thunder Jack (James Coburn), who has secret ties to the new Alaskan arrival, and Barb (Joanna Bacalso), the level-headed female who, as to be expected, quickly becomes the dentist's love interest. Without giving too much more away (not that there's anything of interest left to discuss here), Ted finds out that his inheritance is actually a team of sled dogs, composed of Siberian Huskys that, for some weird reason, Thunder Jack wants to get his hands on. Will Ted let the creatures fall into the hands of this seemingly ambiguous guy? Or will he take them under his control, despite his disapproval, and train them to be the best sledding team of the Northwest?

Building around this plot, "Snow Dogs" utilizes the sappy cliches of recent live action Disney fanfare to a sickening degree, slogging through plot twist after plot twist with a plastic facade suitable only for reruns of "Full House." The dogs aren't even there to make any advancement whatsoever in the premise; their sole purpose is to keep younger eyes occupied, as few (if any) of them will find much to admire about the substance itself. Occasionally, we're delivered a wisecrack or a physical action that generates a crooked smile, but the hope wears out almost immadietly after the generic characters open their mouths.

Qualities like these appear to be contagious when it comes to Disney's live action department; though their feature animation has finally taken a leap of faith in aiming at mature audiences, their other efforts tweak around with the same mundane and brain-dead ideas, treating audiences as if they have the mental capacity of toddlers (their most recent example being the vastly overrated "The Princess Diaries"). What gives? Good question. Maybe it's all part of the studio's idealistic philosophy that they have to keep some of their material cherubic and innocent because, well, the word Disney is synonymous with endeavors of child-like simplicity. But this is a time when the market provides youngsters access to the treasures of the past; if viewers were serious about keeping in touch with these sort of feel-good experiences, what stops them from simply going to rent something like "Mary Poppins" or "The Parent Trap" instead? In either case, "Snow Dogs" is neither new or significant, but rather a painful result of a paint-by-number formula wearing out its welcome for the hundredth time. Take it or leave it, but don't say I didn't warn you.