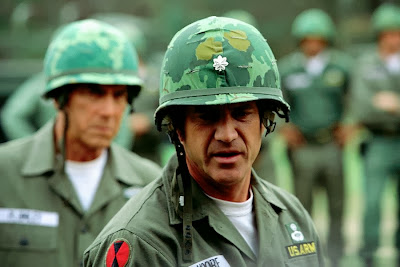 As hard as it may seem, the big budget Hollywood war film is on an unfortunate fast track to becoming the latest casualty of overexposure, joining the ranks of gross-out comedies and teen slashers as a once-elusive idea that rapidly settles in as a cliché. What's most unsettling about this conclusion is the fact that unlike other genres suffering from overkill, the war movie is timely and valuable to our society as a whole, representing the immediate wounds inflicted by gut-wrenching battle that, in ways, can be more damaging than rewarding to the nations who engage in it. Countless major movie studios, alas, now only see the financial potential of ideas like this, and are undermining the essence of it all with endeavors watered down to a routine level.

"We Were Soldiers," the latest release of this once-gritty and realistic genre, is an unfortunate example of taking the bar of inspiration to an oppressed level of inspiration. The movie is all formula and no statement; it slaps an obvious moral situation on top of countless brutal visual sequences and attempts to pass it off as a distinctive, significant package. Truth be known, we already know everything that the movie wants to tell us. That doesn't mean it shouldn't be admired for trying, but what did the filmmakers here honestly think they could add to an already-crowded motion picture genre that has repeatedly made its statement loud and clear?

The movie stars Mel Gibson as Lieutenant Colonel Moore, a high-profile family man who, in the early scenes of the film, is preparing to leave his picture-perfect life (yet again) in order to guide a series of troops into a crucial battle in Vietnam in late 1965. In attempt to lessen the potential impact on his children, Moore resorts to a very ambiguous explanation of war (which is instigated by a daughter who begs to ask what the word actually means), kisses his charming and beautiful wife Julia (Madeleine Stowe) good-bye, and slowly begins to make his descent into the foray of violence on the other side of the world.

In his company, among others, are Major Bruce Crandall (Greg Kinnear), an intelligent chopper pilot, 2nd Lieutenant Jack Geoghegan (Chris Klein), a young and rather naive man who has left behind a wife and a newborn son, and Sergeant Major Basil Plumley (Sam Elliot), an experienced war veteran who spends most of the movie walking around with a constipated face. The movie spends its first, tiresome half setting up these characters and their relationships with one another, as Moore himself guides them through the necessary training and lectures on teamwork before they are to touch down on the battle ground. But when the time comes for the troops to take their first step onto the dreaded Ia Drang valley (which the movie intensifies by calling it the "valley of death" on occasion), they realize, firsthand, that all their preparations mean nothing when it comes to the violent tyranny waged in a war zone, especially when the opposition is so great that you wonder why the US military wasn't smarter in planning their initial strategies.

The movie is based on a book called "We Were Soldiers Once... And Young," somewhat of a memoir, I gather, of the title character himself, who was one of the few men to survive the incredibly intense battle during those last months of 1965. As conveyed through the Gibson performance, Moore's general message is that a person's endurance is the real winner here, no matter how many lives are lost on the battle field or what the outcome is of their efforts.

Does any of this sound familiar? Of course it does. That's because this is pretty much the same thread of reasoning that is used to conduct Ridley Scott's recent "Black Hawk Down," a film that is widely acclaimed for its timely and crucial focus on the ominous atmosphere that is present during times of war. I can't say whether Scott's work is better than "We Were Soldiers," but that's beside the point. Our world is in an age of chaos and confusion, giving us a direct glimpse into the ambiguity of this subject. War is no doubt hell. The only question is, do we really need another movie to tell us that? I think not.