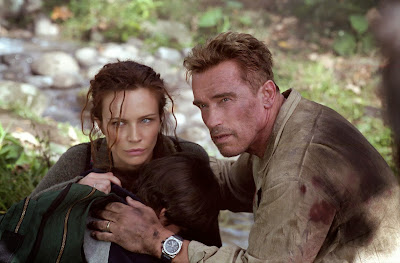 The subject of terrorism has been an immensely demanding subject on our minds ever since two commercial flights crashed into the World Trade Center last September, tearing an open wound into the foundation of the American dream and pulling the nation in to a widespread fire that has plagued this Earth for hundreds of years. In the time since that tragedy, many of us have tried hard to understand the warped logic behind those associated with such heinous attacks: what motivates them, what are their long-term goals, and most importantly, what do they gain from acting out so violently. Of course, the answers are nowhere near simple, and though the government has set itself the goal of crumbling the intricate terrorist networks in the Middle East, chances are these kinds of catastrophic attacks on humanity will go on long after most of us are gone.

Standard reasoning like this doesn't exactly apply to the movies, but at this point, perhaps it should. Consider the new Arnold Schwarzenegger flick "Collateral Damage," a film about terrorists who fuel a man's need for revenge when they mercilessly kill his own family right before his unsuspecting eyes. The movie is in a realm somewhere between typical action-adventure movie lore and plain old absurdity, operating on rules that aren't just implausible in reality, but totally unconvincing and self-serving even for escapist entertainment. To top it all off, the movie actually expects its audience to cave in to the idea that one man (yes, only one) can single-handedly disarm a whole terrorism movement, and that a country like the United States could so easily consider surrendering under the pressure of a villain who freely moves inside the country using commercial transportation (and without being noticed). Who in their right mind could actually believe stuff like this, even if September 11 had never happened?

Schwarzenegger plays an L.A. firefighter named Gordon Brewer, a man whose life is altered beyond repair when his wife and son become casualties of a bomb explosion in front of his own eyes. Later, following the obligatory grieving period, Gordon learns that a man he saw on that fateful day is actually a Colombian terrorist known as "The Wolf," who was initially responsible for the attack and, ultimately, the deaths of his son and wife. However, despite the governments assurances that the villain is as good as captured, locating his whereabouts and apprehending him is a lot more difficult than anyone imagines. It is with this situation that Gordon decides to seek out the Colombian terrorist himself, using extremely rough plans to concoct a strategy, and always keeping on guard of suspected accomplists, who litter the movie like crumbling boulders.

Give or take a few extra details and players, and you have the essence of "Collateral Damage," a would-be story of heroism that suspends genuine nobility for halfhearted revenge and logical details for transparent manipulations. That's an even sadder fate, indeed, for a movie that was pushed four months back from schedule because of its "similarities" with the September 11 tragedies. Why? Because the decision to put the movie on the back burner was so wisely calculated, it suggested the filmmakers actually knew what they were doing, ultimately suggesting to the audience that the product in question at least had some sort of authenticity when it came to the subject of terrorism.

But that belief is immediately squandered as a result of seeing this ho-hum endeavor. The movie has little knowledge of its complex subject matter, resorting to clichés, formulas, and molds of standard Hollywood blockbusters more often than necessary, and ignoring the potential of thought-provoking storytelling in favor of standard action fluff. Yet even the movie's major action scenes, which normally sell the standard Schwarzenegger blockbusters, are dry—they kind of meander around on screen as if they're being filmed by a confused cinematographer, who doesn't see the point of all the big explosions on drawn-out fight sequences, especially when we already saw them done correctly in "True Lies." The acting, likewise, comes off as stale and forced, with Schwarzenegger himself appearing bored with the material, and respectable actors like Elias Koteas and John Leguizamo being wasted by characterizations that have the depth of pocket change.

Of course, I could go on about everything that is wrong with "Collateral Damage" for a good few hours, but that would mean I was ignoring its minor merits. Despite all of the problems here, "Collateral Damage" isn't actually a horrendous movie. At most, it's at least watchable, especially during the first hour when director Andrew Davis creates a firm pace that overlies a bit of brewing tension. In fact, for the first 20 minutes, we can actually see that what Gordon is experiencing is very traumatic. We really can.

But even those merits aren't enough to salvage a respectable product out of this mess. "Collateral Damage" may be masquerading under the umbrella of reasoning that it knows everything necessary about terrorism, but don't be fooled. This is a paint-by-number, shallow and dimwitted studio blockbuster, with little objective other than to tire us out with ludicrous plot devices, stale structure and a bland payoff.