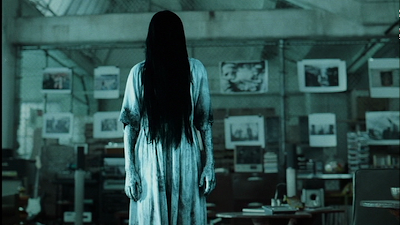 The movie opens with a familiar setup; two teen girls, bored one night during a sleep-over in a great big empty house, begin chatting about urban legends. Katie (Amber Tamblyn) is told by her friend about the infamous legend of 'The Ring,' which involves watching a video of lurid imagery, being phoned by a weird voice to be told that you have a week to live, and then dying right on schedule. Naturally, she shrugs the story off like an innocent fairy tale despite the unexpected admission that she watched such a tape herself a week earlier with some friends. Next scene: Katie is hearing noises, her TV set is turning itself on, and water begins trickling from underneath her bedroom door. She is later found dead, supposedly as a result of her heart stopping.

Enter Rachel Keller (Naomi Watts), a smart and swift reporter who, as luck would have it, is a cousin to the recently deceased Katie. During the reception following her relative's funeral, she casually passes in and out of others' conversations about Katie's strange death, learning about the odd urban legend which not only claimed her life, but also those of her friends who saw it themselves. After doing some research into this mysterious revelation, Rachel discovers that the four teenagers who supposedly watched this tape all died at the exact same time on the same night, fueling her desire to discover exactly what kind of footage was contained on such a video tape. That, needless to say, involves more trailing than Rachel initially anticipates, but when she finally discovers the infamous video, she watches it without a second thought, and quickly finds herself trapped in a situation that, if not resolved in seven days, will leave her pushing up daisies at the local cemetery.

In her race against time to solve the mystery behind "The Ring" (and please don't expect me to specify what 'The Ring' actually is), Rachel enlists the help of not only her longtime friend and colleague Noah (Martin Henderson), but also her young son Aidan (David Dorfman), who, like the Hayley Joel Osment role in "The Sixth Sense" and the little girl in "Stir of Echoes," seems to have a gift for communicating with those in a different plane of existence, although he really doesn't want anyone to think so. Their involvement, however, depends on them seeing the infamous video as well; in a short time, "The Ring" then becomes less about one person's survival and more about the mass protection of those who could fall victim to such an ominous curse.

"The Ring" isn't the standard horror film by any stretch; like the most significant stunners of the genre, it transcends many basic rules and melds the basic concept between three or four tones and techniques, none quite alike and yet each never in conflict with the other.The film's look, for instance, appears bleached out in necessary shots, although the script isn't entirely written in that vein. Sure, the basic sensation of psychological fright is present, as is the occasional sudden jolt in the soundtrack and on the screen, but there's also a lot of sorrow and drama laced into the substance here, especially as the characters draw closer to their deadline and uncover the tragic secrets behind the legend. Some of the specifics don't quite gel together, but Watts' delivery of Rachel makes a lot of the questionable material bearable, as do her two costars Dorfman and Henderson, who stare with deep eyes and speak with a certain restraint of fear in their voices.

The screenplay, written by Ehren Krueger, is adapted from a Japanese story called "Ringu," which has already been made into a highly successful film in Japan. Krueger's immediate difficulty with this kind of material is moving the story to a native location without disrupting its original motives, and although I am unfamiliar with the material, the result doesn't seem like it is misinterpreting the source. Her use of ordinary characters caught up in a modern myth is written like it were a natural configuration, and the direction by Gore Verbinski enlivens it all with visuals that ever-so-subtlely embrace the basic virtues of North American cinema. No, this isn't an obvious remake of a film from a foreign market; this is an endeavor that searches, and finds, its own powerful identity.

Going into "The Ring," many will probably expect to see something along the lines of "Candyman," where the concept of urban legends is thrust into a gory and violent direction unworthy of its source material. No matter what your views on that particular film may be, a movie like this is almost completely without comparison. It's a distinctive, eerie, unsettling and suggestive film on every cylinder. And for a film that contains few orthodox horror elements, it's also damn good and what it does.