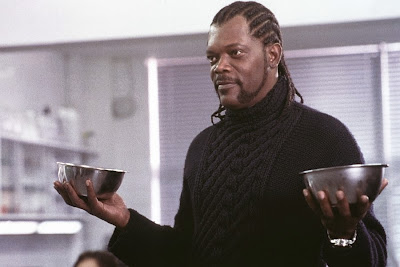 Jackson plays Elmo McElroy, a chemist who, in the early scenes of the film, has his life altered by a drug bust shortly after graduation with honors from college (incidentally, Jackson's presentation in this segment comes off as something rejected from a "Cheech and Chong" flick). Quickly fast forward 30 years later, where Elmo is working on a formula for a powerful new drug disguised to look like some kind of blue candy. He is scheduled to deliver the goods to his drug dealer, the Lizard (Meat Loaf), but decides, I guess, that there are better opportunities for him to sell the formula to alternate sources. He arranges an explosion in his lab just as his superiors arrive, and then boards a plane to Liverpool, his most notable accessory being a kilt which he wears for no apparent reason (and certain characters spend the majority of the movie wondering if he's wearing anything underneath). Too bad for Elmo, the Lizard survives the explosion.

Meanwhile, we meet Dakota (Emily Mortimer), a precise and experienced hit woman with a massive debt owed to the Lizard. She is ordered to track Mr. McElroy down before he has the chance to sell off the important formula, and if she manages to do so without killing him, all of her debts will be erased by the Lizard. Unfortunately, Dakota comes in conflict when it means she has to return to Britain, a place she left behind years before. No one knows for sure what her secret is or why she ran, but when she crosses paths with Felix DeSouza (Robert Carlyle), a lackey to an equally-huge drug lord who is assigned to deliver Elmo and his formula for a 20-million dollar deal, the apparent chemistry suggests that they had a former life together.

"Formula 51" isn't a movie about plot, however. As a matter of fact, it really isn't a movie about anything special, other than unleashing a series of gross-out scenes, crude British humor, bone-crunching violence, pathetic and transparent characters, and the occasional contest between Limeys over who has the worst accent. The movie's screenplay, written by Stel Pavlou, isn't interested in the least in what happens to his characters or their story arcs; he seems to think the audience will enjoy its time simply by watching him offend every segment of the English population possible (his most notable inclusion to the film's shady characterizations: a series of skinheads who are tricked into a drug-induced diarrhea). Some of this might have been excusable had any of it come across as funny or amusing, but alas, it does not; in fact, the only plausible element of the whole film is the Lizard character, a guy who appears in the film for a total of 5 minutes and is always referring to himself in third person.

Samuel L. Jackson never materializes as a sympathetic hero in the movie; he's more like a caricature of a protagonist, acting out in brutal and negative ways simply because that's the way he wants to be. There is no explanation of how or why he chose this particular lifestyle; it just sort of happens, and the first moments of the film make use of one of the most flimsy plot devices I've ever seen to justify the whole setup.

The director is Ronny Yu, who also did the equally-awful "Bride of Chucky" in 1998, and is suited up to direct the much-feared "Freddy vs. Jason" vehicle next year. When it comes to his repertoire, "Formula 51" is actually his highest point as a filmmaker, and that's only because he's managed to put together a cast of relatively talented and familiar actors for his production. Jackson has always been, and will continue to be, a master of his craft, while Mortimer and Carlyle have a certain screen charisma that makes them bearable in almost any endeavor.