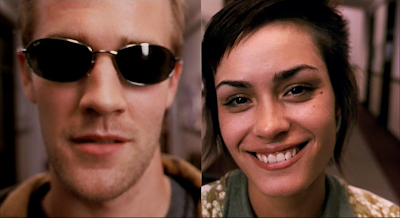 This all might make "The Rules of Attraction" sound more lurid than it actually is, but perhaps that shouldn't be too surprising given the source. Ellis is a writer who likes to draw most of his characters with the same set of distinct parallels, usually involving elements of cruelty, panic, meandering and torment, and the occasional act of a psychopath. His heroes are seldom likable, although a few have the manipulative charm that make them infectious enough to tolerate. And that's the big plus behind a movie like this, a weird and boundless teen fantasy where nothing is normal, everything is detestable, and watching it all unfold is curiously beguiling.

The movie's center is Sean Bateman (James Van Der Beek), a horny, disconnected and mysterious spirit who wanders his campus without a conscious thought in his drug-fueled head (and before anyone asks about relation, yes, he is a sibling to Patrick Bateman, the character at the center of another Ellis novel called "American Psycho"). Sean's primary goals consist of very little positivity, and when he isn't thinking about sleeping with the next woman he meets, he's contemplating how he can dig himself out of the financial hole created by his campus drug supplier, a vulgar and equally-detestable creature named Rupert.

Sean's patterned lifestyle faces a much-needed change via two people who whisk into his life: Lauren Hynde (Shannyn Sossamon), a raven-haired beauty who pines away for a boy she doesn't even know, and then discourages sexual activity by staring at graphic shots of viral infections caused by intercourse;and Paul Denton (Ian Somerhalder), a sly and witty man who once dated Lauren, but is now a full-fledged homosexual with a desire to pursue people who he knows he can never have. As the twisted personas cross paths and have casual interactions, layers and facades are peeled back and core motivations are exposed, leaving behind an anchor of brutal honesty that the audience can't help but attach itself to.

The movie owes a lot of its striking interest to the photography, which makes fascinating leaps against tradition in some of the film's most crucial scenes. The entire first sequence introducing the key players, for instance, is told in fast-forward/rewind mode that involves a scene playing through, backing up to different stages and then resuming forward motion as the camera shifts its attention from one persona to another. Furthermore, there is a brief but brilliant split-screen moment later on involving Sean and Lauren's first meeting, in which both actors stare at the screen until each camera pulls away and matches up with the other, sort of like a cracked mirror as it is being realigned at the center.

If the movie does have a fault, it's that none of the three main characters are nearly as interesting as they should be. Sure, Sean, Lauren and Paul all have their own little quirks that separate them from any similar screen personas, but other than their lifestyle choices, they don't really share many differences between each other. The source material is unknown to me, alas, so that complicates any possibility of comparison; however, having been a big fan of both the book and the film version of Ellis' "American Psycho," I confess that the problem here may lie with the fact that "The Rules of Attraction" is pulling triple duty with something that could be easily wonderful simply by being told through one perspective. The message of the majority of Ellis' work is simple—people are seldom as dimensional as they seem—but here its as if he has taken one detestable character and split him or her into three lesser parts.

Nonetheless, the movie itself is quite an interesting experience to sit through, not so much for entertainment but more for education. No, this isn't another grand character spectacle like "American Psycho," but it at least finds its own identity and sticks with it even when the delivery seems to be less than what is possible.