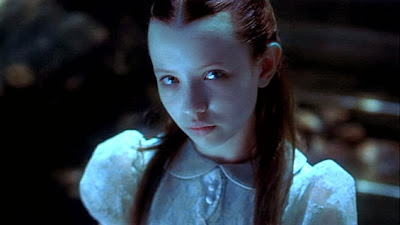 I mean no negativity behind that statement, of course, because the success of those films lied not with whether you cared about the plots or their characters, but whether you found the visuals curiously appealing. Furthermore, neither film attempted to be more than just empty-headed shocks; they happily flouted logic and reality from beginning to end, never once trying to be anything more than a series of brainless (but energetic) visual sequences. But "Ghost Ship" lacks all of that; it may taunt us with a spooky image here and there, but most of the time it wants us to take it seriously, a prospect which is laughable considering the shapeless concept.

The movie stars Julianna Margulies and Gabriel Byrne as Epps and Murphy, the commanders of a vessel rescue crew who have been working overtime in recovering pieces of a sunken ship in the deep Atlantic. On a damp evening following a successful sea excursion, they are approached by a shy stranger named Jack Ferriman (Desmond Harrington), who has documented proof of a mysterious luxury ship floating in the ocean without any visible sign of life on board. When the crew undertakes the quest to discover the ship for themselves, they learn that it's actually a famous cruise liner that went mysteriously missing in 1953, but up to this point had never been seen again (the movie's opening sequence documents this event vaguely, although it does attempt to outdo "Resident Evil" in mutilating human bodies on the creative scale). Foolishly, they descend on the rusty and dark vessel to investigate their findings, unaware that there is a ghost in the form of a little girl (Emily Browning) watching most of their moves.

"Ghost Ship" follows an all-too-familiar checklist of plot conventions—from the obligatory separation of characters in a deadly environment to most of their untimely demises to the double-twist shocker of a climax—but none of it ever has the smarmy innocence or the sheer campiness that it should. In fact, the movie's story is quite complicated in patches, although never enough that it even resembles something that makes sense. Some of this might have been forgiven had the movie's texture been the least-bit pleasing, but alas it's not; the film feels like it is filled with unfinished leftovers from more ambitious haunted house offerings, dark and moody and totally bland beyond comprehension.

There is no reason to expect great things from a film like this to begin with—Dark Castle knows this factor with a vengeance, since their primary goal is remaking the old camp classics by William Castle himself—but there are certain restrictions that even the most intentionally silly endeavors can't bypass. Think for a moment about the two films that precede "Ghost Ship"s release, and how their insanely absurd energies were so consciously utilized in the texture. If those pictures were twisted parades of color and light, then this film is like a cleanup crew trying unsuccessfully to recover the fragments left behind.