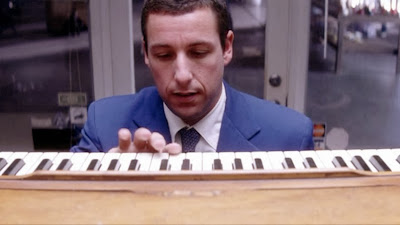 Now comes "Punch-Drunk Love," the next installment into the filmmaker's progressive excursion into this web of curious brilliance. Starring, believe it or not, Adam Sandler as a shy and likable man quietly aching for a shift in his standard life progression, the movie is all about the simplest of pleasures, magnified over a canvas bigger than the most loving heart and yet conveyed with a style that may be hilariously offbeat, but is also quite subtle.

If "Boogie Nights" had Anderson discovering a treasure chest and "Magnolia" the rewards on the inside, then "Punch-Drunk Love" allows him to relish his findings without feeling obligated to make any further quests. The movie is sweet, good-natured, charming and beautiful to observe, and yet not too terribly difficult or complex to be engaged in, either. Sandler stars as Barry Egan, a shy and perplexing individual, of sorts, working his fingers to the bone at a local novelty business (although the movie doesn't confirm that). Driven by very few desires and even less self-esteem, Barry is the youngest kid of a litter of eight, the other seven being sisters, who occasionally call him up at work during crucial work shifts to belittle and tease his coy persona. Unfortunately, it's attitudes like that which bring out his well-hidden dark side, and when he is reminded of past embarrassment by someone, he resorts to violent action—breaking windows, destroying bathrooms, etc.—without regard to the consequences.

Loneliness, of course, spurs other interests, and Barry begins collecting Healthy Choice products in order to capitalize on the product's promise of free frequent flyer miles for a certain amount of purchases (and the loophole he discovers along the way, it should be noted, actually happened not too long ago). Meanwhile, he also decides to try his luck with the phone sex enterprise, but not actually for the thrill of phone sex; he simply wants to talk to the girls, a habit that begins to lose its innocence when his operator and her boss send thugs out to his residence in order to rob him of large amounts of money.

All of these twists are not actually at the core of "Punch-Drunk Love," but rather along the edges. This is a movie about romance, which blossoms for Barry, likely for the very first time, after a chance meeting with the lovely Lena Leonard (Emily Watson), a friend of one of his sisters. Neither of them have much of a social life (in fact, we gather both he and Lena have had very minimal contact for years), but the chemistry between them is instantaneously powerful, almost like it is natural instinct coming out of a newborn for the very first time. The sparks don't simply escape from their secluded energies, either; they practically take off into orbit, resulting in a few romantic interludes that aren't simply believable, but surprisingly touching as well.

Watson's familiar presence as a simple and down-to-earth woman is ideal for this characterization, but the big surprise is Sandler, who has often resorted to overkill performing in conveying many of his comedic identities (his "Little Nicky" role is the most grizzly example). As Barry, he doesn't have the opportunity nor the necessity the be that kind of actor; his soft voice and slumped shoulders are the only fundamental traits here, and they come across as both plausible and charismatic.

Anderson isn't the kind of director who likes to rush things (note the long running times of his previous endeavors), but with "Punch-Drunk Love," he manages to weave a near-flawless work of magic in just over 90 minutes, never compromising integrity or ambition in order to keep things brief. While his performers hit all the correct notes, his camerawork is the real star here, framing the players in simple but honest portraits about discovery and evolution (one shot in which both Barry and Lena embrace completely in shadow is perhaps the film's most remarkable moment). Though the movie isn't quite the marvel that "Magnolia" was, it does manage to sneak up on you and deliver a surprise that is both delightful and unforgettable. If love were to really exist in the innocent context that "Punch Drunk Love" wants it to, this world would be much easier to live in.

Drama/Romance (US); Rated R for strong language including a scene of sexual dialogue; Running Time - 97 Minutes