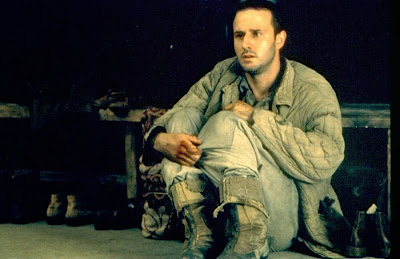 History as abhorrent as this, needless to say, has resulted in some of the most important steps ever taken in cinema. Steven Spielberg's "Schindler's List," perhaps the first brutally honest essay regarding the holocaust ever made, was also the first film I saw that reshaped any and all initial perceptions about the industry and its purposes. Films like "Life is Beautiful," meanwhile, brought the wide scope of these horrors down to individual stories, humanizing the events though the observant perspectives of its victims. Now comes "The Grey Zone," a film less about compassion and more about documenting facts, which relives the authentic events that played out at a Polish concentration camp in the Winter of 1944 during an internal uprising against the Nazi regime.It's not about characters or emotions or even tactics; it's about raw data, and presenting it without having to rely on a heavy emotional thrust to deliver it. That approach may be too much for most audiences to handle, but no one ever said this would be a stroll in the park, either.

It goes without saying that "The Grey Zone" is the most depressing film of the year. It maybe also one of the biggest cinematic downers ever made. And why is that? Because unlike its close counterparts, which normally could depend on some kind of uplifting conclusion, this is a motion picture without a shred of light at the end of the tunnel. There is no sense of elation or relief whatsoever here; under the direction of Tim Blake Nelson, it's a brutal, hardcore and painful film to endure, and if it doesn't anger you so much as once while you're watching it, then chances are you never even saw it to begin with.

The movie opens with a brief setup via story cards. The Germans, we discover through this introduction, were more determined than ever to increase the volume of Jewish prisoners for extermination, and offered a seemingly-handsome package of wealth and privilege to a select few Jews if they agreed to lead their own people into the gas chambers and then pile their corpses into the crematorium ovens. Those that accepted the horrendous responsibility, however, not only turned a blind eye to the well-being of their suffering race, but to reality as well; after all, when does selling your soul over to the dark side actually mean you're free from the fate yourself? This is the "grey zone" that the movie's title refers to, in particular, the zone in which both Jews and Nazis crossed moral paths and caused the catastrophe together (although there's multiple other meanings behind the title as well).

"The Grey Zone," specifically, deals with the twelfth "Sonderkommando" of this dilemma, which was filled with Jews who knew their fate as assistants to the Nazis would come towards the end of their fourth week, but refused to abandon the hope of potentially overthrowing their superiors before the deed was carried out. We meet, among others, Hoffman (David Arquette), a nervous polish man waiting anxiously for the moment when his group revolts against their enemies, and Abramowics (Steve Buscemi), a once-wealthy Hungarian who barks at those who even suggest the possibility that he will never make it out of the crematorium alive. Their secretive work against the Nazi's is conducted carefully under the supervision of Nyiszli (Allan Corduner), a pessimist who acts as if he's fighting a losing battle, and the attempts made by the German soldier Muhsfeldt (Harvey Keitel) to uncover a potential uprising unnerve the Jews even more than they already are.

The movie does some mild work in establishing respectable characterizations like these, but its best and brightest focus lies with a speechless little Jewish girl (played by Kamelia Grigorova) who is a survivor of the gas chambers and becomes the Sonderkommando's central priority in their attempts to spare a few lives. On the other side of the fence, meanwhile, the Jewish women find themselves teased and tortured for information regarding stolen gunpowder, unaware that one of their own, Dina (Mira Sorvino) is stashing it in corpses to be sent over to the crematorium so that the men can collect it for their upcoming projects.

As bold and unyielding as "The Grey Zone" stands with its historical subtext, there are a few factors detracting from the powerful message. Nelson's direction knows the essentials of being emotionally involved in the when it deals with this kind of subject matter (and since he wrote the play it was based on, this is a given), but he doesn't allow the audience to connect with the tragedy or its doomed players as much as he should. The script runs a lot of its gruesome details by us but barely gives us the chance to make a response before it shovels out more. Even the characters feel like they're being given things to do at too fast a pace; when discoveries are made, dialogue is exchanged and decisions are reached, they all simply move onto the next crisis without actually considering what has just happened that much.

For the sake of avoiding sounding too negative (or even preachy), though, I will simply leave you all with this thought: "The Grey Zone," no matter what its faults are, is a film that should still be seen by everyone. Why? Because it's important; important to our past, important to our present, important to our future. Consider the tragedy of September 11, 2001, and how thoroughly it is discussed in the media; are you sickened every time the tragic footage is played? Of course you are. But we need to be reminded of things like this every day... in order to make sure they never happen again.