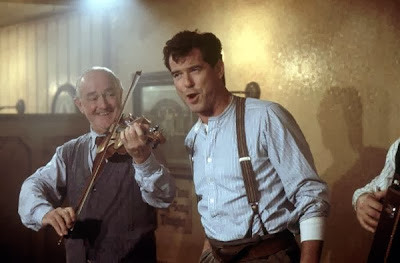 What a sweet, gentle and feisty movie "Evelyn" is. And what an admirable little person its title heroine turns out to be, a redheaded Irish girl who isn't afraid to speak her mind and voice her concerns even if it means certain punishment from her overly-strict superiors. At the opening of the movie, which is based on true-life events in the early 1950s, the vivacious Evelyn Doyle (Sophie Vavasseur) and her two brothers are sent off into Irish orphanages following the abandonment of their flaky mother, their father, Desmond Doyle (Pierce Brosnan), seeing no need for the government to resort to such actions because of his own availability to raise them. Lifestyle and capability aside, however, he simply can't avoid the harsh reality of Irish law: that children are forbidden to live with just their fathers unless consent is given from the mother as well, a requirement that is challenged by the fact that dear old mom has seemingly disappeared from radar.

Little Evelyn's confidence, though, simply can't be broken. No, not even when she verbally attacks an Irish nun for using force against a student and gets physically punished as a result. Not even when the higher powers refuse to even grant her father visiting rights. And not even when he goes before the local courts petitioning for their return and his denied, his chance to even appeal torn away from him as a result. It's easy to see why the movie is named after her rather than one of the movie's other characters; her spirit and endurance are at the heart of the picture's central themes, which could have easily been overplayed if they had fallen into the hands of a cautious or insecure young actress.

The movie is a biting—if somewhat formulaic—attack against Irish government, in which Desmond coverts himself from an unemployed alcoholic into an upstanding member of his society and launches a massive uphill legal assault on laws and the courts. Meanwhile, he begins a relationship with the witty and dashing bartender Bernadette Beattie (Julianna Margulies), who, early on during one of his frequent drinking binges, encourages him to seek out her brother Michael Beattie (Stephen Rea), who is a lawyer and could offer much-needed assistance in his pursuit to regain custody. What Michael lacks in terms of legal maneuver, furthermore, is picked up by other notable referrals: the American lawyer Nick Barron (Aidan Quinn), who is a stickler for specifics, and Thomas Connolly (Alan Bates), a retired man of the law whose mere presence as a consultant could sway the deciding vote from one of the three court justices.

The director of "Evelyn" is Bruce Beresford, who made the charming "Driving Miss Daisy" and the forgettable "Double Jeopardy," and here he wisely balances his story with not just important courtroom scenes and decisions, but conversations about the importance of family and friends as well. His actors, likewise, do a fairly solid job of exerting the material without seeming like overachievers; Brosnan and Margulies have some likable chemistry together and with other cast members, and little Vavasseur herself is able to carry scenes independently without seeming out of place or too branched from the root of the premise.

Unfortunately, Paul Pender's script doesn't break any new ground in terms of storytelling. The structure, for instance, is clichéd down to the very first line of dialogue, and there are even points when certain buildups are so obviously thrown together that our reactions are drained before they're even needed. But in the end, does that quibble really matter? Not really. This is basically an honest and charming film, not one of these overblown sappy courtroom dramas that have you rolling your eyes at each and every sentimental plot gimmick. In fact, by the end, I didn't even mind that Evelyn is forced at one point by the screenplay to babble about her "angel grandpa" being in the courtroom, the bright sunlight from a nearby window conveniently falling on her backside as she speaks about faith and hope keeping families together no matter what obstacles the government implements.