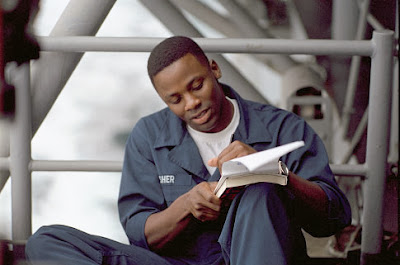 To assume that he could duplicate the depth and brilliance of his acting the first time behind a camera is, perhaps, an unfair expectation, but strokes of astute observation have at least informed the attempt. With "Antwone Fisher," the recent Academy Award winner has taken a real-life memoir and turned it not into a sappy melodrama, but an honest, respectable and engaging character study in which the dramatics are just as important to the plot as the progression of the characters. Furthermore, he gives the audience the rare opportunity to greet a bright new screen talent in the form of Derek Luke, who plays the title role so sincerely that it forces us to wonder why he is only now coming to light. While this isn't a triumphant achievement for Washington as the pilot of this engine, Luke is an even more remarkable revelation, an island of heart in a narrative full of sadness and unfair advantages.

"Antwone Fisher," a closing card informs us, is based on a true story, although the screenplay has reportedly taken dramatic liberties with several of the key details. At the root of the narrative is Antwone himself, a naval officer in training who has brief but periodic bursts of anger that usually result in peers being beaten to a bloody pulp. Anger management is recommended, but when his superiors catch him in the act, they decide the more suitable punishment is a psychiatric evaluation. He then finds himself sitting across the desk of navy psychiatrist Jerome Davenport (Washington), who informs his hesitant patient early on that unless he begins talking, he'll be wasting an entire hour every week staring at the walls in the office.

Fisher doesn't say a word for quite some time. But when he realizes that his bottled-up anger could be undermining a building friendship with the fetching Cheryl Smolley (Joy Bryant), he finally opts to reveal his past to the intrigued Davenport. The source of Antwone's anger, not surprisingly, began when he was moved into a foster home just after his mother gave birth to him in prison. But what the story reveals beyond that are a series of brutally painful, violent and disturbing memories that cause listeners – including us – to recoil in disgust. Suddenly reasons populate the terms at which people in the present choose to respond to his underlying violent nature: has he ever tried to cope with the harsh reality of his early life? Does he have the strength to face his demons? And what will the future bring him should he seek out his own real family? In many ways the movie's first scenes, involving personal fantasy, foreshadow what must transpire in the resolution.

The film moves carefully and perceptively through the weeds of Antwone’s life thanks to a solid script, which was written by the real-life Antwone Fisher and utilizes all the dependable dramatic waves of a solid character study. It also wisely intersects the developing narrative with several flashback sequences, which peal layers back as a means to reach the center of the character’s struggle (the fragmented mother/son relationship is the source of his pain). Luke, who was supposedly discovered on accident, carries this dramatic burden remarkably well, sometimes conveying weakness and strength in the same scenes without obscuring the raw power of the material. A closing sequence in which he meets his biological mother for the first time exemplifies the balance; he opens up to her about the pain and suffering she had caused (intentional or otherwise), barely holds back tears, admits his anger, but then comes back to good grace before the situation devours him.

Washington is one of the most gifted of our modern actors, and as a filmmaker he replicates much of that spark without actually going all the way with it; parts of his work feel curiously unfinished, including several crucial exchanges towards the end, and other twists are stretched thin in order to prop up the details of the past (the romance, for instance, feels unfinished and vague). But the movie is a much better endeavor than it might have been in the wrong hands; it's real, passionate, subtle abd genuine about the issues it raises. Washington has done all that is necessary of him for now; someday, he might even progress towards being a visionary rather than just a good facilitator of likable individuals.