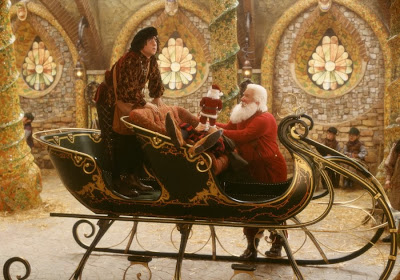 Logic like this doesn't exactly apply to those who will be the recipients of all the neat little gadgets and gizmos that are being manufactured at the North Pole on an annual basis, but that's to be expected. So with that spirited question in mind, "The Santa Clause 2" offers them (and even those of us who are turned off by the concept) to actually see what goes on during those crucial final weeks approaching Christmas down in Santa's workshops. Almost on a round-the-clock basis, hardworking elves of all kinds pour in through the factory doors, work their fingers to the bone fine-tuning all the latest kids inventions, pitch concerns and quibbles about toys to higher authority, and even occasionally find time to play against their big old boss in a spirited game of tag football. But all is not well in the village for long when a few slightly loose ends fall into Santa's red lap and threaten to undo all the hard work for the upcoming holiday.

"The Santa Clause 2" builds on the groundwork that was laid down by its predecessor, a labored and very uninteresting rendition on a holiday legend which demanded the audience believe that Tim Allen could actually pass off as a childhood saint. In that film, Allen's character Scott Calvin accidentally killed the previous Santa Claus, and when he put the giant red robe on to fill in for him on that crucial Christmas night, he became eternally linked to the responsibility, literally growing in a big belly, rosy cheeks and large amounts of white facial hair overnight.

Here, Scott seems to have finally accepted his fate, and resides over the North Pole factories with pride and cheer. But his joy is quickly pulled back when his primary assistant, Bernard (David Krumholtz), discovers a hidden clause in his contract as Santa: the "Mrs. Clause." Yep, jolly ol' Saint Nick has to get hitched in order to keep this big seasonal gig, and unless he does so before the next Christmas arrives (which is just weeks away), he'll find himself going back to the role of Scott Calvin. Without a choice, he returns back to his family in North America to pursue women in hopes of snagging a wife, leaving in his place up North a large plastic look-alike of himself who walks, talks and thinks like an idiot. But when Scott returns to reclaim his duties, just how much damage will the Santa decoy have done to the North Pole?

I would be lying if I said that I didn't find any of this the least bit amusing. On many degrees, and unlike its messy predecessor, "The Santa Clause 2" is quite the delightful little holiday experience, packed tightly with visual treasures, neat little characters, and the occasional in-joke that the adults will take a liking to. The major problems that crippled the original "Santa Clause" picture, furthermore, or almost vanquished this time around, as if Disney realized their original mistakes and put the follow-up in the hands of those who recognized them. Tim Allen, for example, doesn't come off here as a man trying to hide behind a beard and a suit trying to be Santa; he simply falls into the role, and we are willing to accept him as the genuine thing. Likewise, the film makes a cagey decision by having the majority of the action play out in the North Pole itself, a place that has evolved and been enriched beyond the stale and cold afterthoughts that the original movie bellowed.

A few quibbles, there are, still. For one, the movie doesn't even seem interested in the fact that Scott Calvin has an older son back at home; when he gets in major trouble (and is put on the forbidden "naughty" list), dear old dad does in fact rush right back home to help him, but forgets all about his kid's troubles when he finds himself attracted to the bitchy school principle, played here by Elizabeth Mitchell (allow me to emphasize the "Mrs. Clause" element of the story at this point). Secondly, the story tends to write new characters in to the mix without actually developing them completely; in fact, some of them are even abandoned after one or two scenes (such as the Molly Shannon character, a blind date of Scott's who has enough energy and humor pumping through her to deserve a crack at another moment in front of the camera). And lastly, the movie's special effects wizards may have been too lazy as far as Santa's reindeer are concerned—when these four-legged flyers appear on screen, they aren't just obvious digital beings; they move and react like they're stuck in Looney Tunes shorts.

A lot of these arguments aren't really too important in the long run, however, because this isn't a movie in need of constructive thinking. This is all simply a vehicle designed to stimulate the belief system of a youngster, and when you compare it to its laughable predecessor, it accomplishes all that is necessary in that field. And who knows?—if parents are able to get past their own embarrassment of walking into a theater showing this picture, they might actually enjoy it themselves.

*Note: Although "The Santa Clause 2" opened in theaters on November 1, it was essential to hold this review over an extra month. Seasonal movies, after all, are more effective when they're seen closer to the actual holiday.