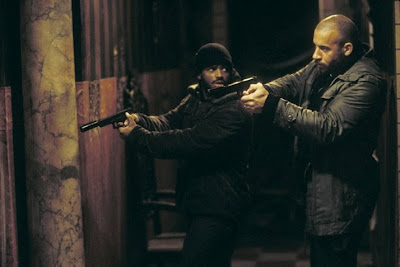 The movie is a crime-spree thriller sketched with a paint-by-number mentality, a gauzy and uninspired piece of work that is not only predictable, but also cold and callous whenever it tries reaching for the emotional underpinning. Diesel plays Sean Vetter, the top dog of his field in Southern California who has just successfully captured the one man whom the anti-narcotics department has been tracking down for years—the drug leader responsible for most of the major cocaine trafficking between Mexico and the United States. "You have no idea what you're up against," the newly-captured drug lord cryptically informs Vetter, although the rugge —not to mention concealed—cop is unalarmed by the veiled threat.

Later that evening, he goes home to greet his loving wife Stacy (Jacqueline Obradors), a woman, we gather, who is used to spending day after day alone in a big beach house while her man is off saving the world. The minute he walks into the room, though, her eyes light up and she falls into his arms, aware of what her husband does but wise enough not to pry in on specific details that aren't any of her business. The happiness is obvious, although as expected in a movie like this, it doesn't last long. Stacy and Sean's home is invaded shortly afterwards by gunmen; he is seriously wounded (although not before killing one of the two shooters himself), and she dies after taking a bullet in her stomach.

Meanwhile, much to the displeasure of the department that expected the trafficking efforts to crumble without the benefit of a leader, the drug cartel undergoes major changes and upgrades. "This territory now belongs to "Diablo," a gunmen shouts into the crowds of a Mexico-based cocaine operation, suggesting that the ring is now only still alive and well, but taken over by a new leader. Who that is, the movie does not immediately reveal, and it provides ample opportunity for Sean to create a revenge plot and unravel the misdeeds of whoever was behind his own assassination attempt. Is the old cartel leader still operating from jail? Or did the hit come from the mysterious Hollywood Jack (Timothy Olyphant), who seems like the average working-class guy in southern California until he offs Sean's surviving shooter for not getting the job done?

These are basic narrative lines that aren't too difficult to follow, but the problem with "A Man Apart" is that it wraps them in countless sequences that either seem irrelevant to the story, are too hectic and jumbled to clearly identify what is actually going on, or lack essential human logic. What, for instance, is the significance of a shoot-out in which Sean beats and kills a man before his supposed ally pulls out a gun on him? How is it possible for someone to successfully smuggle a phone into a maximum security federal prison for a famous drug leader to use in his jail cell without anyone noticing? The celluloid is like a giant piece of Swiss cheese, sporadically leaving gaps here and there without the need to explain or justify them.

Diesel deserves so much more than a ho-hum vehicle like this. No, not necessarily because his other work has been much better—in fact, only one of his major efforts, the high-octane spy thriller "XXX," actually falls on the positive side of the scale—but because he always manages to turn out tolerable performances in even the most mediocre screen treatments. Unlike Sylvester Stallone or, to some degree, Arnold Schwarzenegger, this isn't a man who simply jumps in front of a camera and allows his muscles to do all the acting. He's genuine and has personality on even the most wasted endeavors, delivering his dialogue and his emotion without laboring it into the standard action film practice. In many ways, he's very plausible in "A Man Apart" as well, although the script doesn't give him ample time to really demonstrate what he, or anything else, is capable of.

The director, F. Gary Gray, isn't exactly one of my favorite filmmakers to begin with, but surprisingly, his visual efforts here do allow some relief from the insufferable writing. The movie looks great and builds terrific atmosphere, especially during scenes when both protagonist and antagonist have unlikely meetings in the prison chapel to discuss the impending threat of this "Diablo" persona. Unfortunately, even that aspect of the movie dwindles by the time the final act reaches the projector—the buildup to the climax is pretentious, and the actual revelation at the end is so predictable and obvious that it has one wondering if it even is the actual ending. "A Man Apart" may be another movie under the belt of one of action's most promising new stars, but it's certainly not a worthy one.