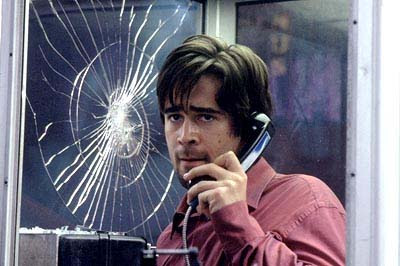 Prominent film directors ranging from Alfred Hitchcock to Wes Craven have found a sinister solace in implementing these devices as sources of terror, and now the concept is revived once again in Joel Schumacher's latest cinematic venture, the taut and tense New York street thriller "Phone Booth." Here, the phone exists not as a mere tool, however, but as a focal point of the story in which every situation and direction is determined. One might ask how a movie can get away with revolving itself around one basic object, but the answer turns out to be more simple than they might realize. This isn't a movie about detailing or meandering or even caring about plot. What it is, instead, is 80 minutes of pure and unflinching brilliance, a nonstop adrenaline rush that is as exhilarating and engrossing as the great summer blockbusters of the past.

Beneath the big lights and behind the colorful facades of America's most treasured metropolis, a cold world of politics thrives off its innocent but naive citizens, allowing clever manipulators to take the blissful ignorance of some and turn it into wealth and power. Stu Shepard (Colin Farrell) is one such being, a calculating, disconnected, shrewd and egotistical publicist who gleefully taunts unsuspecting clients with promises he has no intentions of keeping. Not unlike many movie characters in his field of work, he isn't even phased by that apparent sense of inhumanity, either; in fact, he embraces the frigid nature of the business and foolishly tinkers with anyone he can, including a rising rap star who is given the impression that his high-profile publicist can make appearance schedules with a mere snap of his wrist. Stu isn't just in this world for the fame and fortune—he genuinely seems to enjoy playing games with others.

Mr. Shepherd, however, does have his share of blind spots. During a daily routine that consists mostly of him walking up and down busy New York streets while his overworked assistant manages incoming business calls, he stops at a phone booth—probably the last active one in the city, we are informed—to place a call to Pamela McFadden (Katie Holmes), an aspiring actress that Stu is secretly pursuing. The scenario is ultimately convenient, because if his wife Kelly (Radha Mitchell) ever suspect him of cheating, there would be no record of mysterious calls being made on his cellphone to support her suspicion. After the most recent conversation with his potential mistress, however, his wife becomes the least of his worries.

Almost as soon as Stu lets go of the receiver, the phone in the booth rings. Picking it up out of curiosity, he is greeted on the other end by a man who claims to know him (voiced here by the unseen Kiefer Sutherland). Stu isn't amused or daunted in the least by the claim, until the man on the other end threatens his life if he walks away from the phone. The publicist isn't immediately concerned by the threat—after all, isn't it a given that publicists get these kinds of threats from former disgruntled clients anyway?—but the realization of potential danger gradually sinks in after a series of uncanny descriptions and statements, all which seem to indicate that the mysterious caller is not only a serial sniper who has been feared for a while in the city, but is also just a short distance from the phone booth itself.

Then a man near the booth is shot. Nearby observers, unaware of a sniper being near, insist that it was actually Stu who did the shooting. Cops swarm the area. The police Captain Ramey (Forest Whitaker) volunteers as the mouthpiece for potential negotiations with the seemingly disoriented publicist. But Stu, caught in both the cross-hairs of the law and this serious sniper, knows how sticky the situation is; if he leaves the phone, the sniper shoots, but if he doesn't, he runs the risk of the S.W.A.T. team opening fire. How, then, does he satisfy the radical demands of his enemy as well as prove his innocence to cops without publicly giving himself away?

The screenplay, written by Larry Cohen, isn't a terribly detailed one (in fact, a lot of its ideas are very basic in structure), but in ways, that's an admirable—and essential—approach. Anyone can turn a concept like this into a two-hour action picture with shoot-outs and explosions, but it takes real gusto to simply make a movie in which a solitary situation can grip an entire audience for the whole running time. It's not an entirely psychological scenario, either; with this approach, director Schumacher supplies the physical presence of "Phone Booth" with the sense that there is always a lot going on, either by using split screen or by shooting at angles that allow multiple actions to be implored in single frames. Background activity is as crucial here as what goes on in the foreground. The movie is short, perhaps more than most thrillers can successfully operate, but somehow it knows just when to exist gracefully from the screen, ending at just the right time before it becomes tedious or too implausible to tolerate. Summer may still a couple months away, but here is an exiting endeavor that will no doubt set the benchmark for that movie season higher than it has been in years.

Thriller (US); Rated R for pervasive language and some violence; Running Time - 81 Minutes