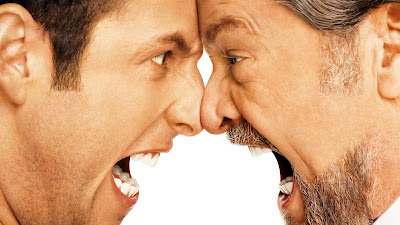 Reflecting the endless run of laughless comedies that have destroyed almost any sense of his screen credibility, Sandler's excursion in this mediocre and tired material hits one dead end after another without ever seeming to realize it, throwing jokes out left and right as if it expects the audience to respond in a positive manner. Many do, in fact, deliver on that promise—staring into the darkened aisles of a crowded promotional screening, countless viewers not only chuckle at the gags, but find themselves rolling in the isles. Perhaps this is proof that I'm simply overly critical on some things—after all, there was a similar reaction during "The Waterboy" and "Big Daddy"—but perhaps it's also proof that the target audience has always been very easy to please. In any case, a pattern has been established here, and it's doubtful that Sandler, his fans, or I will be changing any time in the near future.

In the meantime, we have "Anger Management," certainly not the worst of a crop that includes "Little Nicky" or "Eight Crazy Nights," but far from being much of an improvement, either. Sandler stars as Dave Buznik, an emotionally repressed business man who refuses to show affection to his girlfriend (Marisa Tomei) in public because of an embarrassing prank pulled on him in the fifth grade. When he bids her a good-bye in an early scene for a business trip, he boards a plane and winds up being seated next to a passenger played by Jack Nicholson, who laughs hysterically with a headset on and never ceases to slew out rude remarks to all those who come in contact with him. When Dave decides to ask for a headset himself, the stewardess (oops!—I mean "flight attendant") lags on the request and then gets very defensive when he tries to get her attention by grabbing her wrist. A short argument and a tazor shock later, Mr. Buznik is in court answering to assault charges.

Inevitably, the guy doesn't have a chance to defend himself because, well, that defeats the whole purpose of making this movie about anger management. When he is sentenced to 20 hours of classes to control his supposed temper, Dave wanders in to find that his instructor is none other than that one obnoxious plane passenger himself, a doctor named Buddy Rydell. He assumes, of course, that working with this guy will be a piece of cake. He thinks wrong. And before he or the audience knows it, the plot involves him in one predicament after another in which Buddy tests his pupil's limits with some rather extreme psychotherapy. If Dave wasn't a violent man beforehand, we assume he will be after all is said and done.

The screenplay by David Dorfman is something we come to expect from a movie containing Sandler as its star—a work of forced and obvious jokes, pranks, one-liners and sight gags that aren't merely delivered, but thrown around like weapons. The most baffling aspect of this technique, at least this time, is that Sandler himself is not actually the culprit to the plot mischief; yes, his Dave persona does have one or two mean things to say or do here and there, but the bulk of it goes to the supporting players. Nicholson without a doubt plays the single most loathsome creature in the movie, a man who seems to have his way even without directly admitting so and has a snappy put-down machine where his mind should be. He's mean and petty, and yet it never dawns on anyone besides Dave himself that he should be the one seeking anger management therapy. But in a film that isn't conscious about what is obvious, what in the world can be done, anyway? Little but stare on and observe the gags as they are tossed at us—there's toilet humor, physical pain, large shouting matches, obscenities, middle fingers, lesbian kissing and penis jokes galore, although it all pales in comparison to one joke in which both doctor and patient stop on a bridge to calm their nerves by singing a chorus or two of "I Feel Pretty."

Okay, this scene is at least funny. Heck, I'll even admit that I chuckled a little at one or two of the penis gags ("You're competing with a man who looks like he can satisfy a blue whale?"). But that's where it ends; on the whole, it's never very funny. No, not even when Heather Graham briefly pops up and starts putting brownies in her mouth while she's ranting. No, not when Sandler's character dresses his overweight cat in specially-made feline clothes. And no, not even when Dr. Rydell smashes a man's car window in and then leaves his business card behind "for insurance purposes." Just as the film's characters need anger management, so does the movie itself need comedy lessons.