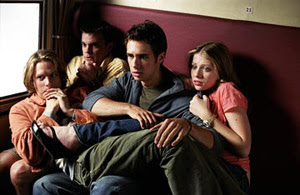 Speaking from personal experience, I cannot easily remember a film I have loathed more. That's because "Eurotrip" is pure cinematic awfulness, a long and devastating lapse in judgment that is beyond hope for anyone who dares to witness it, and a harsh example of how nothing (not even ordinary human feeling) remains sacred in Hollywood's continuing desire to push buttons and defame others for the sake of box office success. To say that the movie is a spectacular achievement of cinematic torture would not do it justice, either; in essence, this is the kind of endeavor that makes last year's "Boat Trip" seem almost sympathetic in comparison. Attending it was a regrettable experience and I pity anyone who will pay hard-earned money to sit through it.

The premise (if you can call it one) deals with four friends who go backpacking in Europe after their high school graduation. The supposed leader of the group is Scott (Scott Mechlowicz), an understated whiz kid who lost his girlfriend on graduation but is determined to make a relationship with his German pen pal, a woman whom he has had intimate contact for a long time with (although the movie doesn't even reveal her gender to him until after he brushes her off as an Internet stalker). Determined to win her affections, he goes overseas with his horny teenage friend Cooper (Jacob Pitts), and there they meet up with twins Jenny (Michelle Trachtenberg) and Jamie (Travis Wester), who began backpacking in European nations just shortly before.

Even though the movie depends primarily on the fact that Scott needs to track down his German beauty before she writes him off for good, the majority of the time is spent with the four friends as they venture through specific points on the map and immerse themselves in their surroundings, including hardcore bondage clubs, poverty-stricken towns in which pocket change can get you a four-star hotel room, escaped convicts, little kids pretending to be Hitler, and gay exhibitionists who also double as stalkers. And that's just the first half of this overwrought trash; we will forget the fact that the film also uses incest, Vatican defamation and sex in confession booths as comedic devices as well much later on. Is there a point or purpose to any of this, though? None, other than to leave viewers cringing at the very thought of seeing anything else unfold. The taste factor is so disconnected from the setup that possible laughs almost always turn into extreme groans.

The director, who co-wrote the script with the exact same people who worked with him on the screenplay to last year's travesty "The Cat in the Hat," leaves no kind of impression on the viewer other than emotional bruises; the material is enforced with such spite and carelessness that even basic chuckles seem unwarranted. It doesn't help matters, furthermore, that the audience gets bombarded by four screen personas that are easily among the most unlikable in teen comedy history: sexist, stupid, clueless and hormone-driven incompetents who in the real world probably wouldn't be able to find their own way across Europe even if the maps were tattooed to their butts. And even though we are dealing with relatively unknown faces on screen, for the life of me I can't see how any competent filmmaker could surround any aspiring thespian in such a cheaply realized production. The very idea is saddening and detestable; it is a wonder anyone wanted to be associated with it at all.

Did any of these actors consider for a moment about what they were getting themselves into by participating in this crap? One has to wonder. Of course, a typical argument with failures this extreme is that even really bad ideas look good on the printed page, but anyone who might have read the script to "Eurotrip" beforehand was probably not thinking about much other than dollar signs. This is the kind of project insults the very name of its genre. After witnessing it, I felt like writing a letter of apology to the makers of "Gigli."