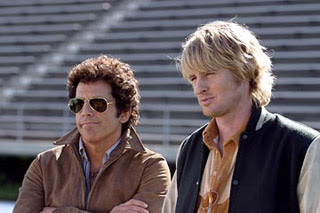 This might not be such a worrying prospect if Stiller and Wilson actually emerged as natural comedic partners, but alas they don't. Just watching a mere 30 seconds of footage from a movie like "Zoolander" is discouraging enough; the movie is utter trash, yes, but it's also a clear showcase of two colleagues working against each other rather than with each other, thus creating severe disconnect in the process. Both, at least, realize what elements are essential in any kind of offbeat pairing (it has worked before with Wilson and Jackie Chan, another one of the actor's repeating screen partners), but somehow they just never seem palatable enough in this pairing to be plausible. This is certainly not an Abbot & Costello match by any stretch.

So why does their chemistry pay off in "Starsky & Hutch?" Watching the film unfold in all its zanyness, you get the impression that they've put in the required time and effort this go-around in establishing the partnership; they appear more as a two-headed beast rather than scraggly little serpents competing for screen time. Also surprisingly enough, the material they are dealing with is spirited and chock-full of substance, and as a result we find that we're enjoying their situations almost as much as we're admiring them separately. The fact that they also genuinely appear to be engaged by the dialogue and the physical elements of the story certainly doesn't detract from that notion, either.

The plot is, naturally, little more than a whole bunch of cop show clichés stretched out to last the full running time of your average motion picture. Stiller is David Starsky (the dark-haired one), a cop who likes to do all his work strictly by the books, and Wilson is Ken Hutchinson (the blonde), his flaky but charismatic partner who provides street credibility where it is severely lacking in the partnership. As the movie opens, they both discover the body of a man floating at the edge of a river, an apparent homicide that their superior unwittingly asks them to investigate. That search, of course, doesn't immediately yield any notable leads for a case of murder, but their discussions with viable suspects eventually points them into the direction of Reese Feldman (Vince Vaughn), a topnotch drug dealer whose new service to the crime world is a narcotic that can get past police canines. Unfortunately, proving that he is capable of murder is an even harder task than revealing his criminal identity to the elitist social circles he has immersed himself in. Thankfully, though, they can depend on additional help from Huggy Bear (Snoop Dogg) a street informant who cares almost as much about looking good as helping his police friends fight crime.

The new trend of evoking 70s nostalgia out of old television shows and into the movies has hit far too many road blocks as of late to warrant the slightest tolerance from audiences, but unlike its counterparts, "Starsky & Hutch" does have some success with its concept. For starters, the movie doesn't take any of its material seriously—a big plus—and the alertness of the characters usually results in some scenes of hilarious comic value, such as one in which Starsky mistakes a bag of cocaine for artificial sweetener for his coffee, and another when both men are required to act out a prison inmate's fantasy in order to get information out of him... and it is all caught on videotape. In addition, the elements of personality between the two leads is both infectious and engaging, and several of the minor characters share in that effect by offering their own witty dialogue or participating in plot twists like extreme jokesters who can't help but push the buttons they aren't allowed to.

Still, the movie is plagued by this nagging feeling that the material is sometimes too silly for its own good (as if the sitcom approach completely contradicts the spirit of the television drama of the same name), and the plot doesn't really take us anywhere noteworthy or earth-shattering. But in the end, this is the kind of movie that depends less on specifics and more on ambition, and in that regard it consists of qualities that prevent it from falling into the unforgivable trenches that the "Charlie's Angels" films dwell in. This is above all else a vehicle showcasing one of the more promising comedic duos of our time, and though we might have reservations because of their past work, we are at least admiring them as allies here instead of appreciating one persona and then completely forgetting about the other. If that's all it takes to make a film like "Starsky & Hutch" worth a harmless glance during a weekend matinee, then so be it.