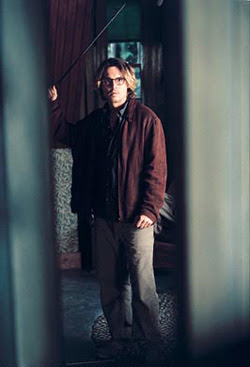 The new arrival is John Shooter (John Turturro), a tall, menacing figure whose deep southern accent and blank-staring eyes are an unnerving presence even when they don't mean to be. "You stole my story," he cryptically warns Mort, just mere moments before dropping an old manuscript at his feet and disappearing around the corner. The still-confused writer doesn't indicate a sense of worry, however; instead, he simply takes the pages and disposes of them in a trash can in the other room, an action of which that means little to the plot when they inevitably wind back up on a table waiting for Mr. Rainey's eyes to investigate them. When he does, he doesn't just discover someone's amateurish attempt to toss around accusations of plagiarism, either; instead, what he finds out is that the manuscript in question follows one of his older stories almost word-for-word. Is this simply a case of a writer being harassed by a man hoping to make some quick money by use of blackmail tactics? If that question had a simple answer, then there would be no point in making a movie about it.

Such is the inspired platform behind David Koepp's "Secret Window," which from the very beginning propels the audience into a cinematic paradox that can either be easily resolved via convenient plot reveals or wrenched even further by equally-convenient narrative twists. The ensuing reaction that viewers will have is one that hasn't been warranted with adaptations of Stephen King stories since "Dolores Claiborne"; it is a taut and cleverly devised thriller in which tension drives the narrative long before the facts do, and a film that expects viewers to be thinking instead of just sitting there waiting for the material to assault them.

The movie is driven in part by a thoughtful performance by Johnny Depp, who undertakes the Mort Rainey role with such an instinctive quirkiness (both physically and mentally) that he emerges on a level that seems more unrestricted than what the script would ordinarily allow. Even when he is engaging in heated discussions with supporting players, everything around him becomes a background element; his wife, for example, an emotionally unstable twit played by Maria Bellow, appears as nothing more than a blur during dialogue exchanges with him because Depp is so engaged by the oddities he brings to the table that everything else is minimal. Most actors would probably just play it straight with the role and share the limelight with the costars, but this is clearly not one of those actors. His work here only anchors the notion that he steals the complete spotlight in whatever film he stars in.

The Shooter character at least makes for a particularly observant antagonist here, especially during conversations with Mort in which he drops hints about harming family members if the supposed misdeed concerning his manuscript isn't corrected ("This thing isn't going to end until one of us is dead"). His elusiveness, as expected, lifts the movie's sense of emotional pressure, but the majority of that comes less from the fact that he's hard to locate and more from the fact that he shows up randomly and without any hint of tact. If a writer of this caliber was genuinely being stalked by some lunatic spouting claims of stealing stories, you gather that this is exactly how the enemy would come across: menacing and dedicated to his game without seeming too impulsive or too calculated.

David Koepp is not a major film director by any stretch, but he has had success behind the camera in the past (his last theatrical film, "Stir of Echoes," was one of the more chilling ghost story flicks of the 90s). That certainly makes him a suitable candidate for a film like this, yes, but his immediate strength here, as it usually is, lies with the writing. His screenplay isn't just some sort of vaguely concocted summary of Stephen King's source material, but a focused and layered work that evokes a strong sense of tension even when the narrative seems to strain. For a good while, the plot actually appears to be a straightforward one, too, giving us details in a way that is direct and smooth without suggesting potential turbulence. Ah, but if "Frailty" and "Identity" taught us anything significant about modern mind thrillers, it's that smooth roads can't stay smooth forever, and by the end of "Secret Window" there are revelations galore as the story strips away all its facades. The outcome isn't as impressive or earth-shattering as it was with those other films, but it works nonetheless.

Does the movie have faults? A few. For one, the movie tends to forget that it even has supporting players at its disposal. Charles S. Dutton and Timothy Hutton are severely under-used actors here, and their roles seem more like afterthoughts rather than contributing elements to the story. Also distracting is the movie's notion of specifics; time and time again we're given detail upon detail about how Mort's life has come to its current point, but several of those ideas seem useless and almost conflicting once the truth about the situation comes out on screen. Still, these are fairly minor qualms for a movie with such a strong incentive to keep the viewers amused for two hours. By the end of "Secret Window," in fact, I wasn't even thinking much about the questionable points; I was too busy being amused by the film's undeniable sense of thrills to care that much.

Produced by Gavin Polone and Ezra Swerdlow; Directed and written by David Koepp; based on the novella by Stephen King