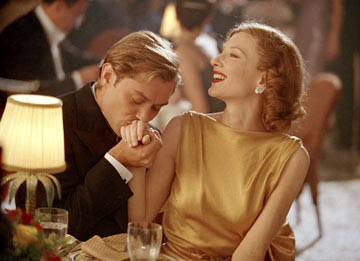 The result, while not nearly as remarkable as his "Gangs of New York" from two years prior, is the kind of experience that has to be seen to be fully appreciated. Steady but meticulous in the way it steps from one point to the next, "The Aviator" is a highly stylized and satisfying chronicle of flawed human life, and a bio-pic that manages to be both exciting as well as informative on so many levels that it warrants repeat viewings. It's also not entirely driven by standards, either; whereas most motion pictures would spend an exorbitant amount of time watching its lead stars slowly succumb to character disintegration on screen, this film opts out of a good chunk of the tragedy and instead only skirts the issue. Howard Hughes indeed had an eccentric life, but it was his drive for success that made him exactly who he is today, and that's where the movie chooses to target its primary enthusiasm.

At the opening of the picture, our protagonist, still a young child, is cryptically warned by his seemingly overprotective mother about the dangers ahead in life - not the least of which is the idea that even the smallest things (like germs passed between two people) can have large consequences. Though her words are, in essence, an obvious utilization of foreshadowing, the movie doesn't follow it directly. Rather, in the next sequences, the now-grown Mr. Hughes (Leonardo DiCaprio) is off spending his family fortune via creative means: by directing a silent film epic about aviation during the First World War. He knows the mechanics of his aircraft quite well; so much so, in fact, that he is only all to eager to be one of the cameramen in the skies during the filming of a crucial flight sequence. Unfortunately, Howard the filmmaker turns out to be quite anal-retentive as far as certain things are concerned, and when he is shown rough footage of a dogfight, he scoffs. "There are no clouds!" he says, complaining that a clear sky as a background doesn't give the frame any sense of dimension. Later on, of course, he finally gets the full shot that he wants (well over a year into production, though, because clouds were sparse in the filming area that year), but once all is done, a new problem arises: his film is silent, but theaters are now being stocked with sound systems and Hollywood is moving on the "talky" craze. Investors advise him to release the film anyway because of its costly nature, but Hughes decides to redo it all to accommodate the new technology, a suggestion that is not easily welcomed by his busy financial consultant Noah Dietrich (John C. Reilly).

The film, though, is an instant success, and it catapults Howard into the spotlight of the Hollywood elite. Celebrities throw themselves at his feet, and ravenous press circles devour his public persona as he climbs each and every social ladder in the city, inevitably leaving behind a trail of crumbs that would more than satisfy today's most ambitious supermarket tabloids. The centerpiece of all his public shenanigans is a fling with actress Katharine Hepburn (Cate Blanchett), who, like Hughes, was an unconventional amongst all sorts of Hollywood standards. Their rich (but short-lived) love affair no doubt shaped his perspective on romantic relationships, and as the movie shows, later flings with the likes of actress Ava Gardner (Kate Beckinsale) were even less successful because of Hughes' inability to function with those he was different from.

The narrative's conflict, however, is not about the character's obsessive-compulsive disorder itself but about the constant tug-of-war that ensues when his goals are challenged by both internal and external dilemmas. Though the cinema is where his career began, his ultimate passion is in revolutionizing the aviation industry - and as such, he sidelines the glamour of Hollywood society in favor of building new and revolutionary planes and conducting takeovers of established local airlines. The latter part, alas, makes him a very vulnerable target to airline CEO Juan Trippe (Alec Baldwin), who wants to spearhead a corporate monopoly on the commercial air industry but is afraid that Hughes' own desire to internationalize it may undermine the progress of his own company. Corporate war ensues between the two, and soon Trippe enlists the help of Senator Ralph Owen Brewster (Alan Alda), a politician who is more than willing to conduct public a smear campaign against the aviator in order to benefit one of his biggest financial contributors.

Amidst his screenplay's consistent vigor (and a lead performance by DiCaprio that is both direct and honest in the way it portrays the title character), Scorsese assembles an ensemble of players here who are more than up to the task of fulfilling the requirements of a few colorful supporting roles. Ian Holm in particular has a few amusing scenes as a college professor who assists Howard Hughes during specific challenges in the moviemaking process, and I especially admired John C. Reilly as Dietrich, the man who pops up routinely throughout the film and always manages to grab his boss and bring him down to reality before his head gets lost in the clouds. Kate Beckinsale, meanwhile, does a fierce but fetching interpretation of actress Ava Gardner, and Alan Alda as a deceitful senator, eager to bring down a towering public figure, is solid as he conveys both the arrogance and the stumbling ineptitude of this historical politician, especially when the two confront each other during a series of tense public hearings meant to accuse the ambitious Howard of stealing millions of dollars from the government in order to pay for his "dream plane," the Hercules (later named the "Spruce Goose").

If the film owes a primary debt to one specific star, though, it would have to be Cate Blanchett: her performance of actress Katharine Hepburn here is not just a zany interpretation, but a literal personification. Blanchett effortlessly transcends the layers of glitz and glamour that accompany Hepburn's reputation and instead brings out her very humanity, nailing all the quirks and behaviors that accompany it (not to mention that unmistakable accent). To say that I was awed by the performance is not an entirely telling description; I was so engaged by it that I was not consciously thinking about the actress or any of her stylized trickery. She skips over being just Cate Blanchett in another movie role and goes beyond the necessary requirement, especially for a supporting part. This is one of the performances of the year.

Above all else, though, "The Aviator" is one of the year's biggest triumphs of scope, a film with such a precise and scrupulous vision that mere frames of celluloid seem as if they are channeling the sources rather than replicating them. Scorsese sees the golden age of Hollywood through eyes that could not possibly be any more observant - the level of detail here is immeasurable, as if he has taken archive photographs and memorized every curve on a face and every stroke of light and shadow in a crowded showroom. Furthermore, the set decorator Francesca LoSchiavo furnishes the picture with a horde of tools and trinkets that add just a slight sense of reward to the already-treasured texture, while cinematographer Robert Richardson ("Snow Falling on Cedars," the "Kill Bill" franchise) applies a good deal of his talent on both wide-range establishing shots as well as basic close-ups of facial expressions, ensuring that there is always a visual contrast between the picturesque grandeur and the somber humanity of the film.

Of course, visualizing the internal framework of any kind of historical figure creates a lot of uncertainty, especially for someone who wants more than just a basic re-enactment of the material. But Scorsese has picked his movie battles wisely here, as Hughes' legendary existence is all too well known both in and out of the public context. His chutzpah renowned (and his flaws equally as legendary), he encapsulated the very definition of Hollywood stardom of his era, and oftentimes the cameras seemed like they were there purely by accident. Writer John Logan knows, however, that the most interesting elements of a damaged human being lie on the notion that high success is often coupled with steep declines, and he contrasts those two notions in a way that reveals the fragility of Hughes' soul without compromising the mighty status of his public persona. Movies like this tend to demand too much tragedy of their situations; often the heroes are completely immobilized by their imperfections. But both the writer and the director find the perfect note with this material - we see Howard is weakening day after day as his germ paranoia consumes him, but we also see that not all the threads of sanity have abandoned him, either. One final scene, in which Hughes finally flies his "Spruce Goose" both after all his crazed isolation as well as the general consensus deeming the task an impossible one, is easily one of the most deeply rewarding seen this or any other year. Indeed, that which does not kill you can only make you stronger, even if just for a brief time.