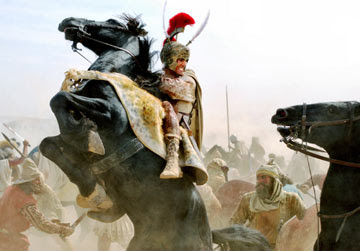 If the great Greek historians are to be believed, then Alexander wasn't as much a "Great" being as much as he was a "Determined" one. Few could dissuade his reach, even fewer could make him realize the glaring errors of his ways, and like any notable historical celebrity with glaring flaws, the eventual outcome was nothing short of uncompromised tragedy. One has to wonder, in fact, why Shakespeare never wrote a play about his legacy - or, for that matter, why a director like Oliver Stone felt he could conceivably mold such a notorious figure into something that might appeal to the average moviegoer. No, Alexander was not a hero or a protagonist: he was megalomaniac driven by desires, fool-heartedness and naivety. And as such, he deserves a film about those things, not a movie in which the seeming intention is to take hard history and splatter it on screen like the mere backdrop to some conventional popcorn blockbuster.

As the movie opens, young Alexander, under the eye of his possessive and eccentric mother Olympias (Angelina Jolie), is told, on frequent basis, that he is meant for great things. A child who thrives at the prospect of challenge, he savors the teachings of the great Aristotle (Christopher Plummer), who educates him and his schoolmates on the kingdoms of Persia, whose primitive societies seem to exist just for the sake of being surmounted by the Macedonians. The prospect of evolving into a great warrior, alas, often fades into the shadows, as his parents are nonstop fighters, and his father Philip (Val Kilmer) silently threatens the safety of his mother with each passing day. If mother was to have her way, of course, little Alexander would grow up not to be an individual but a puppet, to spend every ounce of his being ensuring her continued grasp on power in Macedonia. At first, being somewhat of a mama's boy, he is more than happy to oblige to those veiled requests, especially when dear old dad decides late in his reign that he is going to remarry and oust Queen Olympias from the palace. But when Philip is assassinated and Alexander claims the throne, he does exactly the opposite of what his mother would have hoped: he becomes his own person.

The recurring theme of the script is relatively submissive: Alexander wants to conquer one new height after the next, and each task, increasingly difficult on both him and his followers, only brings him closer to potential catastrophe. Ah, but where would the world's true heroes be if they at first didn't realize the hazards of their excursions? In an early scene, Alexander stands at the feet of his armies and recounts all the many losses his men have experienced, and then turns around and leads a full-fledged charge against the armies of Babylon, whom he believes are responsible for his father's murder. Here, the movie acknowledges both the motivation and the enthusiasm of its key player, but it also doesn't forget to recall the core value with any film hero: in order to move forward, you must at first come to terms with the past. Unfortunately for Alexander, the lines separating his humanity from his unrelenting heroism faded drastically with each new conquest, and his often inane rhetoric, used to keep the armies pushing forward, eventually did less to encourage them as it did to alienate them.

That, perhaps, also becomes the film's greatest obstacle - how do you keep the audience engaged by a character who has such little regard for basic logic with each new passing moment? The answer is simple as long as a director makes his or her own perception known in the storytelling. Furthermore, to ask that question is to be reminded of a film like Werner Herzog's "Aguirre: The Wrath of God," in which an insane adventurer led an ill-fated expedition into the jungles of South America as he sought out the legendary city of El Dorado. Herzog's film, of course, knew right from the beginning that his title character was nothing resembling a hero, whereas Stone seems to lack the forethought to take a firm stance on his own protagonist before all the material is thrown at us. Audiences never know how they are supposed to feel about Alexander as a person here; is he a hero, an enemy, a human or an animal? History leaves those questions up to interpretation, but a highly-stylized studio film with an incentive to play directly into the casual moviegoer's mindset could at least try to make up its own mind first. Without a specific position, viewers might as well just go back and read the historical documents instead.

Colin Farrell, who plays the title role, is an actor who enjoys challenges; witness his various performances in films like "Phone Booth" and even "Daredevil" if you want proof. Unfortunately for him, he is too out of league to be a plausible Alexander. Why? Because his organic charm is not suited well to the God-like importance that his screen persona requires. He is too much of an ordinary guy here, and it creates severe disconnect. Similar can be said of Jared Leto, who plays Hephaistion, Alexander's gay lover, in a manner so restrictive and cold that it suggests he is waiting for someone to come along and upstage him (although to the film's credit, it does not totally ignore the homosexual relationship between both men). If there is a bright spot to the performances contained here, though, it is Angelina Jolie as the cutthroat Olympias - in a deliberately over-the-top manner, she sinks her teeth into this material like a ravenous cat clawing between bushes for a runaway field mouse. The performance is overzealous but clever and calculated, and the shrill hilarity of it all makes it quite a significant bright spot amidst so many routine and/or underwhelming acting presentations.

As far as supporting roles go, the movie provides a large arsenal but often finds itself shooting blanks, especially when it comes to the heavily-emphasized ranks of Alexander's Macedonian army (although one, Ptolemy, goes on to be the picture's old and wise narrator). Another quibble: the title character's eventual wife, Roxane (Rosario Dawson), is seemingly created as a mere device so both Stone and his actors can get out of going too far with the perception that Alexander the Great was openly bi-sexual. She isn't even provided substantial dialogue beyond an occasional shout or complaint, and when her husband decides to go back to the arms of Hephaistion, everyone practically forgets she even exists.

On a technical scale, the film is solid but is not without other faults. For one, the battle sequences, often shot with a certain skill (as expected of an Oliver Stone picture), are paced awkwardly - sometimes they end sooner than you think they need to, other times they drag on so long that you anticipate them never ending. Meanwhile, the art direction, while remarkably detailed (especially during moments in which characters gaze over the city of Babylon), lacks necessary substance because the screenplay refuses to venture out of the big stuffy palaces and into the streets below. If we are to indeed believe that Alexander really was revered by the civilizations he liberated, it helps to underscore that more than just tossing in an occasional scene in which he rides through a roaring crowd atop his horse.

Where's the substance in all of this? If I had to guess, I'd say it's locked away somewhere, waiting to be revealed in a more thought-provoking movie than the one that exists here. Hollywood blockbusters should never be expected to be true to history or to even be mindful of their subject matter, yes, but the really great ones are those which rise above the conventions and go for more than what they are required. A director like Oliver Stone is fully capable of doing just that - and indeed, in the past, he has reached that goal. Seeing his "Alexander," alas, is like watching a basic rough cut of something drastically unfinished. Much like the title character himself, this is an endeavor that strives for greatness but is too burdened by its own ego to live out the full potential.

Action/Drama (US); 2004; Rated R for violence and some sexuality/nudity; Running Time: 173 Minutes