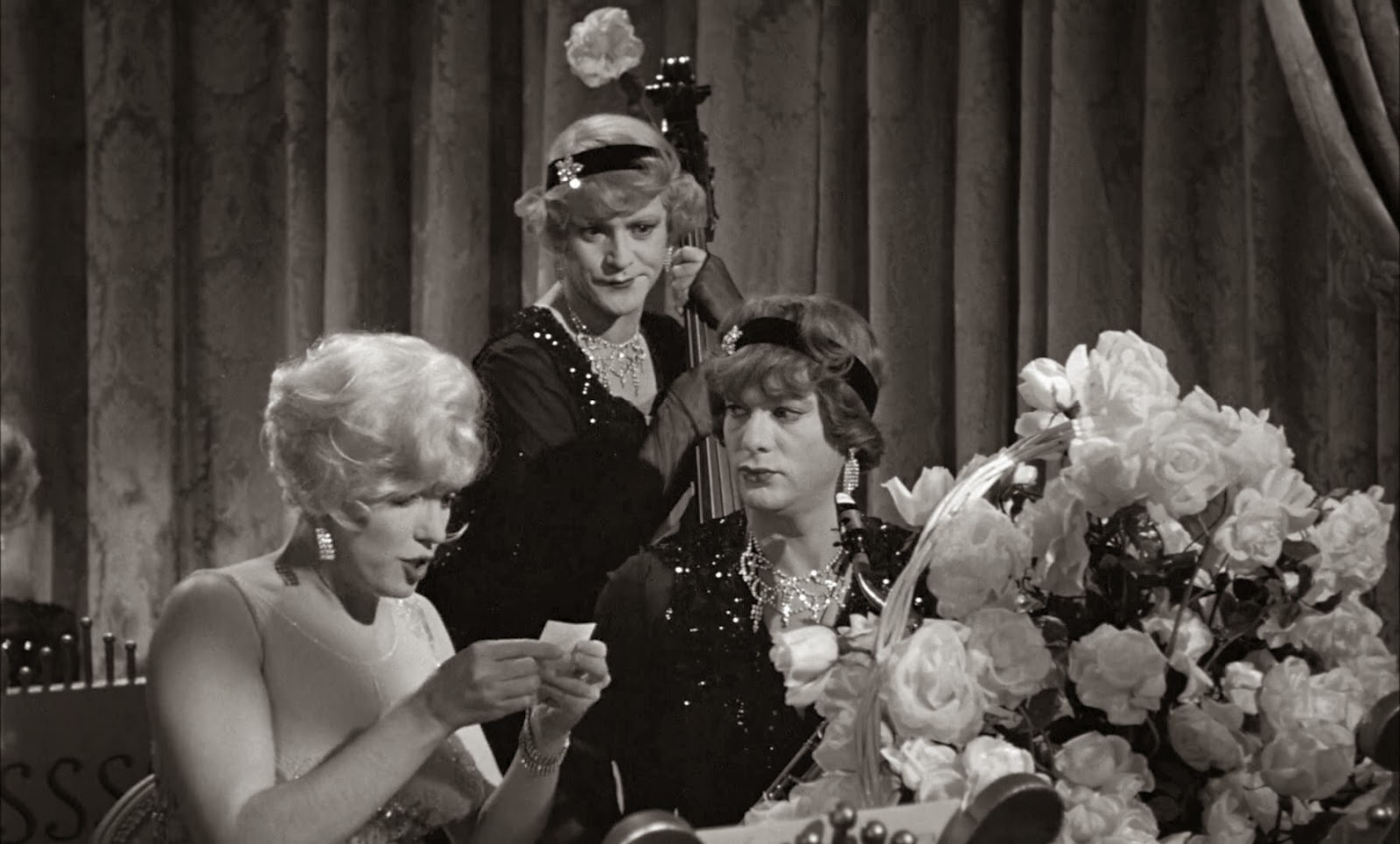 Has there ever been a Hollywood film as pitch perfect in its cheerful eagerness as Billy Wilder’s “Some Like it Hot?” In a medium where the perfunctory significance of lighthearted storytelling is often relegated to reflecting the social groundings of their given generations, here is one of those movies that persists beyond the implications of a mere time frame, resonating with audiences like a very fine wine. Perhaps it was always destined to do that, in a way, because of how ahead of the curve its material seemed in context of the era; when some preview audiences walked angrily out of the theater during its release in 1959, the studio begged the director to recut the film in order to make it more accessible to the masses (Kansas state refused to show the movie in any of its theaters otherwise). But Wilder remained steadfast in preserving his endeavor, and released it worldwide with no further tampering. “Maybe this is the wrong neighborhood in which to have shown it,” he once told Jack Lemmon. Yes, or perhaps just the wrong decade.

Seeing it in a cultural climate now less resistant to the ambiguities of gender identification, Wilder’s picture is not so much a remnant of the past as it is an important catalyst to the social norms that would follow, both in the movies and in pop culture. To have witnessed Tony Curtis and Jack Lemmon carry themselves for two hours of screen time while almost always in drag may have left many a mouth agape in in the late 50s; to us, the material plays to the full function of delight and amusement, while the back of our minds recognize the antics as once audacious ripples. What they ultimately inspired now exists as proof of the movie’s endurance among ambitious filmmakers, many of whom have used the premise as groundwork for a slew of other high profile motion pictures (two of the most successful being “Tootsie” and “Mrs. Doubtfire”). And at the heart of it all is a screen personality so ingrained in our psyche that watching her float through the frame carries a certain immense power, like a figment of wonderment reaching through the screen and imprinting herself in the imaginations of all those who gaze back at her captivating presence

One doesn’t even need to say the name Marilyn Monroe to emphasize the point. What is her allure? Her magnetism? Her sense of permanence in the eyes of a culture often unforgiving to the identities of the past? From the moment she first walks across the screen in “Some Like it Hot,” minds are enraptured; there is a stoic quality in her posture, and the face reveals a simple creature whose beauty and charm gloss over a surface of understated richness. Consider that this attribute was dominant in a brief career in which she upstaged nearly every actor she worked with, and perhaps it was no simple coincidence that most of her characters possessed similar qualities.

In this movie, of course, she is joined by equally famous screen icons, in a plot that basically exists to propel mischief and slapstick. The setup: Joe (Curtis) and Jerry (Lemmon) are musicians who inadvertently witness a mob hit while picking up a car on their way to new job, and when the crime boss spies the observation he orders a hit on them before they have the chance to reach authorities. In a desperate bid to flee the scene (and Chicago, for that matter), the two go undercover in the only available musician job that would take them out of town: as women in an all-female jazz band headed towards a gig at a swanky Florida hotel, also featuring an attractive but bubble-headed blonde named Sugar Kane (Monroe).

Their interactions are the stuff of classic comedies. Joe and Jerry (or “Josephine” and “Daphney”) banter like brothers caught up in an elaborate practical joke gone awry, and they are seen and heard in disguises that embellish their lack of femininity (the Lemmon character’s inability to walk in high heels provides one such comical moment). When they meet Sugar, both are instantly tantalized by her insatiable draw and lightweight demeanor. The first night aboard the train to Florida is also chock-full of notable interactions, including one in which a smitten “Daphne” and Sugar share a shot of whisky in an upper cot, and are then subsequently joined by the rest of the band mates for a private liquor party that gets quickly out of hand. And when “Daphne” encounters a leering socialite named Osgood (Joe E. Brown) at the hotel, a complicated series of antics ensue that ultimately inspires the greatest closing line of any film of its time.

The movie’s lasting impact, I suspect, is owed in great deal to the impeccable delivery of the screenplay, which sets up a consistent series of sequences in which characters interact in such a way that their dialogue is often exchanged with incredible quirk (a personal favorite of Marilyn’s: “A herring? Isn't it amazing how they get those big fish into those little glass jars?”). The key interaction comes down to Joe and Sugar, both of whom share a similar conundrum: they are lost in the wilderness of love searching for someone that is, quite possibly, a figment of imagination. When “Josephine” takes it upon himself to manipulate a third identity in order to woo Sugar, their conversations indulge in a certain playfulness that would be overlooked in more serious comedies (“Water polo? Isn’t that terribly dangerous?”, she asks; “I’d say. I had two ponies drown under me,” he sarcastically retorts). Because they are conveyed by an interaction that seems in synch with the material, Tony Curtis and Marilyn Monroe don’t simply occupy the frame in a superfluous way, either; they seem genuinely comfortable in these skins, and share a chemistry that contradicts what most of the behind-the-scenes movie lore would suggest.

It is widely known how difficult a production “Some Like it Hot” proved to be, particularly in relation to Marilyn Monroe’s presence on set. Billy Wilder had previously been vocal about her demanding and exhaustive nature when they did “The Seven Year Itch” in 1955, but the studio heads were so overwhelmed by her star power that they simply refused to pass on her when it was needed. This meant many troubled days of production – in some cases she would refuse to step outside of a dressing room, and in others it would take her four dozen takes to actually convey simple lines of dialogue (the most famous story: Wilder had to paste the line “Where’s the Bourbon?” inside of a dresser drawer so that she would remember it, and then his star kept forgetting to open the correct drawer). But try to imagine the movie without her – would audiences be as awestruck by any other starlet in such a glitzy, likeable role? And would the aloof stares of a woman caught in the headlights of basic thought resonate without those piercing Monroe eyes?

In some ways, all of Wilder’s important movies achieve an added layer of grandeur from an underlying struggle behind the scenes. The butler in “Sunset Blvd.” was not so much reciting dialogue as he was recollecting his own saddening past. Jack Lemmon was undergoing some of his own personal demons during the making of “The Apartment”; in many of the scenes, he looks past the camera as if looking into a mirror, and is not always happy with the reflection. Marilyn’s own marriage to Joe DiMaggio hit the skids during the production of “The Seven Year Itch” – do you think it coincidental, or tragically ironic? The operative response for Wilder, I believe, is that it is possible to neutralize negative emotions and circumstances in life based on the correct outlook, just as it is possible to make joyous movies with troubled productions. Looking beyond an array of wit and charm scattered across dozens of scenes of inspired genius, “Some Like It Hot” unifies us in the collective embrace of optimism, and its remarkable audacity transcends all ages for the sake of a universal good time. No wonder, really, it still holds up so well today. 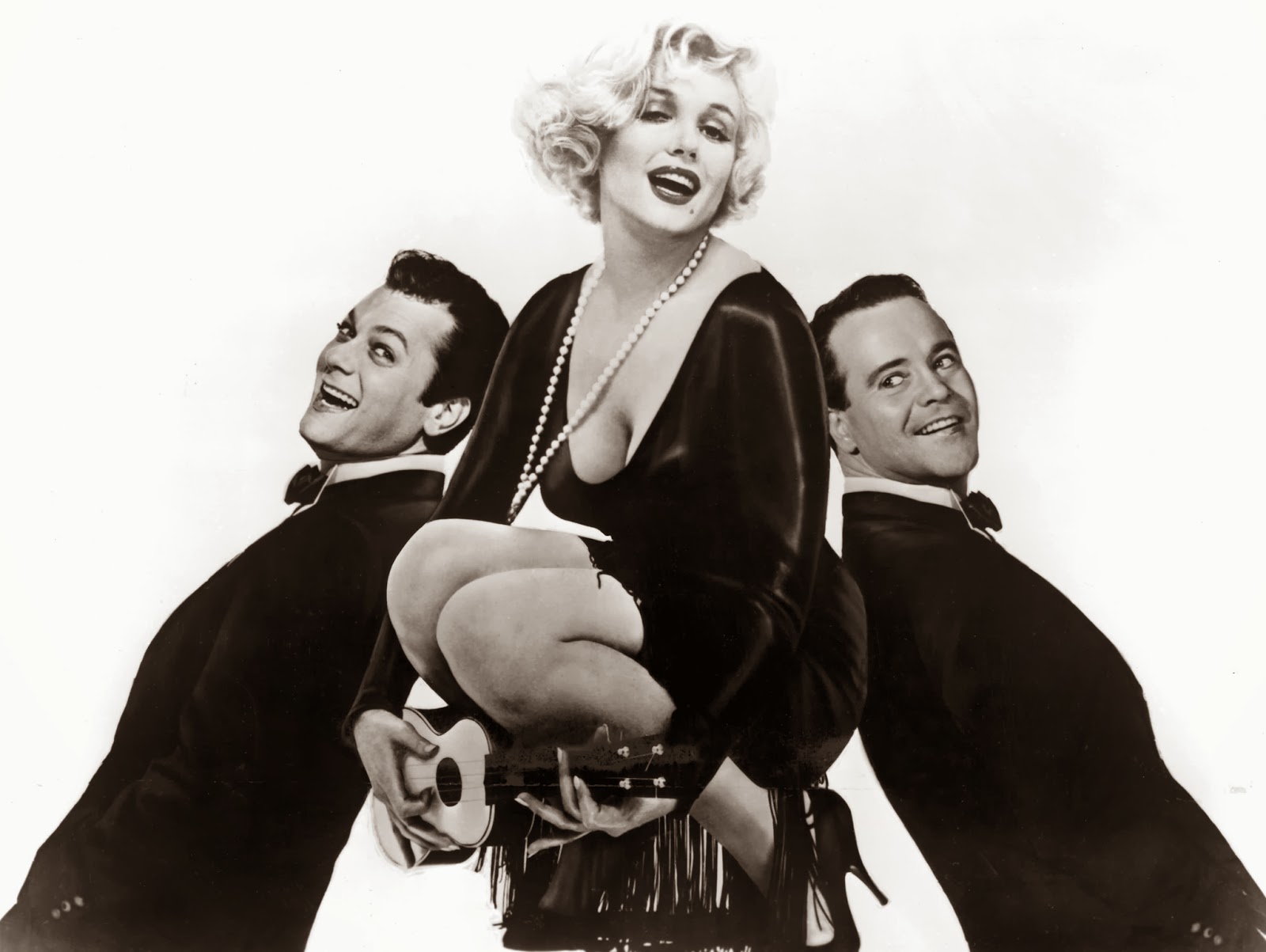