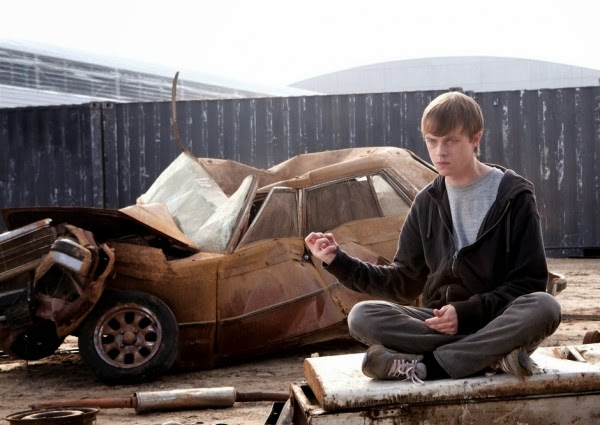 At some point, I suppose, it’s inevitable for all concepts to leap beyond the avenue of plausibility. “Chronicle” opens with a premise that is a stretch even by the standards of the handheld horror film technique: three teenage boys wander into a wooded area just outside of the high school, find a large hole in the dirt that beckons with low rumbles of sound, and discover an alien boulder-ish thing on the inside that permeates a soft neon glow. Their instant wonderment is quickly replaced by fear when their noses start bleeding, and the exposed fluid defies earthly gravity. Shock and anxiety give way to swift movements and chilling screams, and the camera falls dark before the audience can catch any further detail. Perhaps that’s a cop-out, in a way, because by the next scene the three of them are back at home, laughing and tossing around softballs while freezing them in mid-air using some newfound telepathic ability. Explanations, apparently, are no longer a formality even in first person mockumentaries.

The three boys are not so much individuals as they are “found footage” commodities. After a brief setup in which we meet the youngest of the three, a victim of home and school bullying named Andrew (Dane DeHann) who is obsessed with recording every moment of his life, we descend immediately into the critical chain of events. Prior to the discovery of said “hole,” the other two are seen only in passing; there is never a sense that any of them would be friends outside of the predicament that unites them. But I digress. Once this “discovery” allows them to tap into some unexplained telepathic ability, they become practically inseparable. The power is miniscule when they first test it, limited to minor objects being moved around (or practical jokes being made at the local grocery store). Then they start levitating in mid-air, and eventually graduate to all-out flying above the clouds, usually while Andrew is still holding the camera (or causing it to follow with utmost precision). Matt (Alex Russell) is Andrew’s cousin, and observes that his cohort’s abilities are progressing much more rapidly than the others. Steve (Michael B. Jordan) thinks Andrew can reverse some of the unfounded negative reputation he has at school by using his abilities at a talent show, which leaves behind an audience of amazed (if stupefied) teen observers.

In movies like this, however, such miraculous discoveries eventually open up the door for them to be used maliciously, usually because one among the crew has buried anger issues. Andrew’s home life is in a state of decay that becomes the conduit for those opportunities: his mother, already dying of cancer, inches closer to death’s door each day, while his his father, a former fireman-turned-alcoholic, verbally and physically abuses his son for trivial reasons, perhaps as a self-imposed therapy of dealing with the grief of his dying wife. Coupled with the idea of his powers growing exponentially, Andrew starts using his gifts for darker deeds – some of them, such as a scene in which an irate driver is forced off of an embankment and into a flooding river, are used as tension devices, and there is a brief moment in the second act where an explosive argument between two of them results in a lethal accident.

Some ideas are contingent to this format. The first of the mainstream endeavors, “The Blair Witch Project,” achieved a certain psychological chilliness in its ability to set up, sabotage and then deconstruct characters lost in the woods with nothing but a movie camera as their defense. The audacious “Cloverfield,” about a giant monster that emerges from the Atlantic and wreaks havoc on Manhattan Island, was enriched by its cheeky arrangement: arm innocent bystanders with cameras, and watch them run into alleys and buildings while large objects are hurled across neighborhoods by a menacing beast on the Upper East Side. Even the latest of these success stories, the “Paranormal Activity” films, tap into that eccentric energy with moderate success. But “Chronicle” feels more than a little out of sync with the challenge of the technique, often forcing the cameras to bend to a will that is too far-fetched for this material. A later scene demonstrates this much better than any words could; following an explosive confrontation at a gas station, Andrew winds up in a Seattle hospital badly burned, and is confronted at the bedside by his angry father. Harsh words and threats are blurted before a powerful outburst collapses the room, and every moment is caught by a video camera set up on a tripod at the foot of the hospital bed. Why is it there? The police justify its existence as necessary surveillance, even though they have him handcuffed and are oblivious of his abilities.

Other scenes don’t even bother with justification. At a moment of climax in which two of the teens levitate over the city in a confrontation, their antics are viewed from the points of view of countless cameras scattered across the city – cellphones, tablets, digicams, surveillance cameras, and so on. During a critical exchange of words where their antics leave them at a standstill, the movie is even calculated enough to – yes – have the Andrew character mentally snatch all the nearby cellphones so that they can hone in on his big moment of dialogue. Watching it, I was struck with three thoughts: 1) heroes-turned-villains in newer movies have egos that would make Lex Luthor seem humble; 2) what are the odds that so many people would be armed with camcorders so late at night in a moment that seems to happen too rapidly to rush to?; and 3) why bother resorting to all that trouble to maintaining presence in the format when it might just be easier to, you know, take a shot at filming the story from the third person?

Removing the handheld aspect from of the equation, a lot of interesting stuff is actually going on in “Chronicle.” After being inundated with showy superhero endeavors over the last several years in which powers are exemplified by overpowering special effects, it’s refreshing to see this material handled with simple intentions – we only see dead space in between the heroes and the objects they are manipulating, creating an understated display that achieves certain realism. I also liked how gradual the material develops; despite gaining incredible abilities, we are not inundated with three kids who rush off to destroy the world or obliterate their enemies, as most movies about teenagers might; they keep pace with their evolution. The performances are also quite believable given the implausible nature of the premise, and there are scenes between some of the actors that would be above the scope of integrity in a movie more deserving of them. But I suppose there is still a buried desire in audiences for stories that take place in seeming real time, with actual characters holding the cameras in the middle of the action. Will they find the endeavor satisfactory? I have no doubt. But somewhere amidst a jumble of fast images and unscripted shouts, I couldn’t help but feel that this all would have been more effective in a movie that played the material with a more straightforward approach.