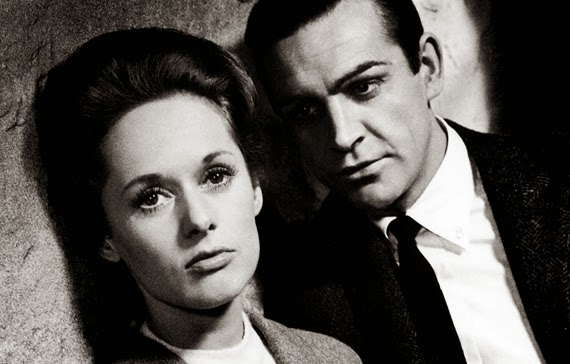 This particular relationship serves as the skeleton key in a story where old psychological traumas seem to be seeking escape; without it, this is a movie that might simply have been about events without meaning. Since their strange (almost detached) connection occupies a space outside of the central story progression, however, most viewers think little of it until the movie wraps back around to that point – and even then, amidst such mysteries, the presence of this one woman standing on the outside of her own life doesn’t initially suggest a past worth serious contemplation. Because Alfred Hitchcock often used his beautiful heroines as drones for developing story devices, this expectation is almost obligatory. But shy, reserved and calculated Marnie represents a distinctive shift from that perspective. Here is a woman who has many secrets in a life where jobs and friends are disposed of in routine intervals after major thefts and lies, but she is not simply a plot point. A great tragedy has warped her identity, and the film’s reason for being isn’t just about thrills or uncertainties, but about the suggestion that disturbances can make us alien to one other and inspire quiet contempt before the time arrives to deal with the sources.

“Marnie,” a farsighted yet unassuming thriller with brilliant desires to deconstruct a human mind, is often seen one of the great director’s lesser known works, forever cast in the shadows of the films that preceded it (“The Birds” and “Psycho,” notably). Most argue that is because Hitchcock bent himself to the will of a story as opposed to the other way around; because he envisioned Grace Kelly (then a princess of Monaco) in the lead role prior to casting Tippy Hedren, there is a subtle trace of submissiveness in his screen treatment, perhaps as a an indirect way of persuading her out of retirement (and then a later attempt to turn Hedren into a carbon copy). That gives the film an almost distinctive quality, in the sense that it departs from the controlled environment he demanded so incessantly with his later thrillers. What he accomplishes, nonetheless, is in creating a character that is both sympathetic and human without becoming a narrative sacrifice. Some might even say she is the most enduring of his heroines, and certainly one of the few left standing stronger at the moment of resolution.

The movie opens with a shot that is standard for the director: a camera spies a lone woman walking away from the lens, her left arm concealing a yellow purse and jet black hair dense enough to cloak any possible views of a face. In the moments that follow – a scene in which an angry business man discloses to police the theft of thousands of dollars from his office safe – the purse becomes a focal point. Because we know it carries the missing money, it also implicates its carrier, much in the same way that objects are often used in the director’s movies to incriminate the devious actions of others (the necktie in “Frenzy” or the cigarette lighter in “Strangers on a Train,” for example). Shortly after, the black die in her hair is washed down the drain and we catch the first full view of the culprit, in a scene where her face reveals almost a smug satisfaction.

Her real name is Marnie Edgar, but her bosses know her by various other aliases. The latest of her victims, we sense immediately, is merely the latest in a long line of business executives swindled by a compulsive liar. She has no shame in the act, and simply transforms her appearance and moves on to the next financial conquest, all of which involve getting a job as a secretary and observing others and their interactions with those giant office safes. How can she so effortlessly acquire employment with few notable references? It all comes down to the look and sex appeal, usually relished by middle aged supervisors who are easily won over by interviewees willing to show a little leg.

Marnie, alas, does not anticipate crossing paths with Mark Rutland (Sean Connery), another business executive who meets the girl (now with light brown hair) and then promptly suspects that, yes, he may have actually crossed paths with her some place before. That gives him the benefit of wanting to make closer inspections, and when he hires her for dictation at his upstate mansion, the two develop a friendship inspired by that intrigue. He finds camaraderie in her love of horses and racing, and she is elated by his desire to protect without requiring exposition. But the friendship evolves beyond that into infatuation and then lust, and once Marnie’s modus operandi reveals itself, he is not so much surprised by the outcome as he is disheartened by the path he quietly suspected was always there.

There are tense interrogations between them, with Marnie’s confessions being full of half-truths. He sees through the deceptions and matches them with equal parts of stubborn insistence, most of which originates from a place of care and admiration. Despite turning over the money she stole, Mark is too insistent to let her simply walk away again – a fact that annoys her greatly, even though it comes with the admission that he has fallen in love. “I'm just something you've caught! You think I'm some sort of animal you've trapped!”, she announces. His responses defuse her tension, but one among them seems to point the movie in a crucial direction: “I think you've had a hard, tough climb.”

You are persuaded by these plot points because the movie invests a lot of time and speculation in the uncertainties of Marnie’s identity. Quiet, pathological and often seething in her outward resentment of men and all they stand for, we observe fragments of buried history swell around her in sudden increments. Some arrive with dramatic urgency, like the scenes in which she reacts horrifically to the color red (first with flowers, later when she spills red ink on a white blouse). Lightning storms also provoke her, and sleep patterns are broken by nightmares that leave her defensive and horrified upon waking from them. The score by Bernard Herrmann (a regular colleague to Hitchcock) suggests heightened awareness in these moments by surrounding them with grandiose orchestra swells, and as they progress from simply to complex, the music progression matches their tone.

The relationship between Marnie and Mark is the mechanism the screenplay uses to advance the investigation. Because he senses (and observes) fragility behind a thin veneer of cynicism, his love obligates him to help her in dealing with whatever tragedies have cast her in the shadow of her past, especially as they progress and become more present in interactions. The performances by Hedren and Connery hit all the right pitches in that context, even though their shared chemistry is – perhaps purposely – labored and odd. Connery is one of the great screen personalities when it comes to eliciting a sense of shrewd charm matched with gentleman-like nobility, and Hedren balances it with a performance seeped in an underlying anxiety, as if always suspecting the moment of despair to overtake her and doing everything possible to run as far from it as she can. The height of their interactions eventually leads us to a sequence of scenes when the two struggle with how to handle their own honeymoon in private, and Hitchcock choreographs a very difficult and suggestive moment with such delicate precision that it inspires thought more than astonishment.

The movie is directed with all the skill we expect of the master of suspense, often resulting in scenes that are brilliant in the way they are executed. Consider, for instance, an early shot that depicts Marnie standing at the safe of her latest professional victim while a female custodian wanders between desks in the other room with a mop; this moment is staged silently, with no realization in each other’s presence, and Hitchcock captures both actions in a wide-pan shot that delivers effective moments of tension and uncertainty. The most daring of his technical choices, however, comes at the climax, in which Marnie and her husband arrive at the epicenter of her emotional trauma by paying an unannounced visit to her mother in Baltimore. There, in a flashback sequence that must have been incredibly dangerous in 1964, the source of all conflict is brought to the surface, in a moment that plays authentically from the stylistic perspective without sensationalizing the details.

I first saw “Marnie” in very recent times, having already been well versed in the more famous works of the master of suspense while aroused by his more obscure endeavors. Much to my surprise, the less successful features in the director’s long career seem to reveal more about him than the successful ones: a notion that is emphasized to great detail here, in a movie that pays close enough attention to its heroine without sacrificing her individualism (as we briefly suspect it might in the early scenes). The beauty of evolving as an artist, you might say, is that sometimes your ability to understand human nature can make you more sympathetic to those you are pulling the puppet strings of. This is the kind of movie that suggests that the most manipulative of filmmakers was, briefly, content to let his protagonist do all the work on her own.


Produced and Directed by Alfred Hitchcock; Written by Jay Preston Allen; based on the novel by Winston Graham