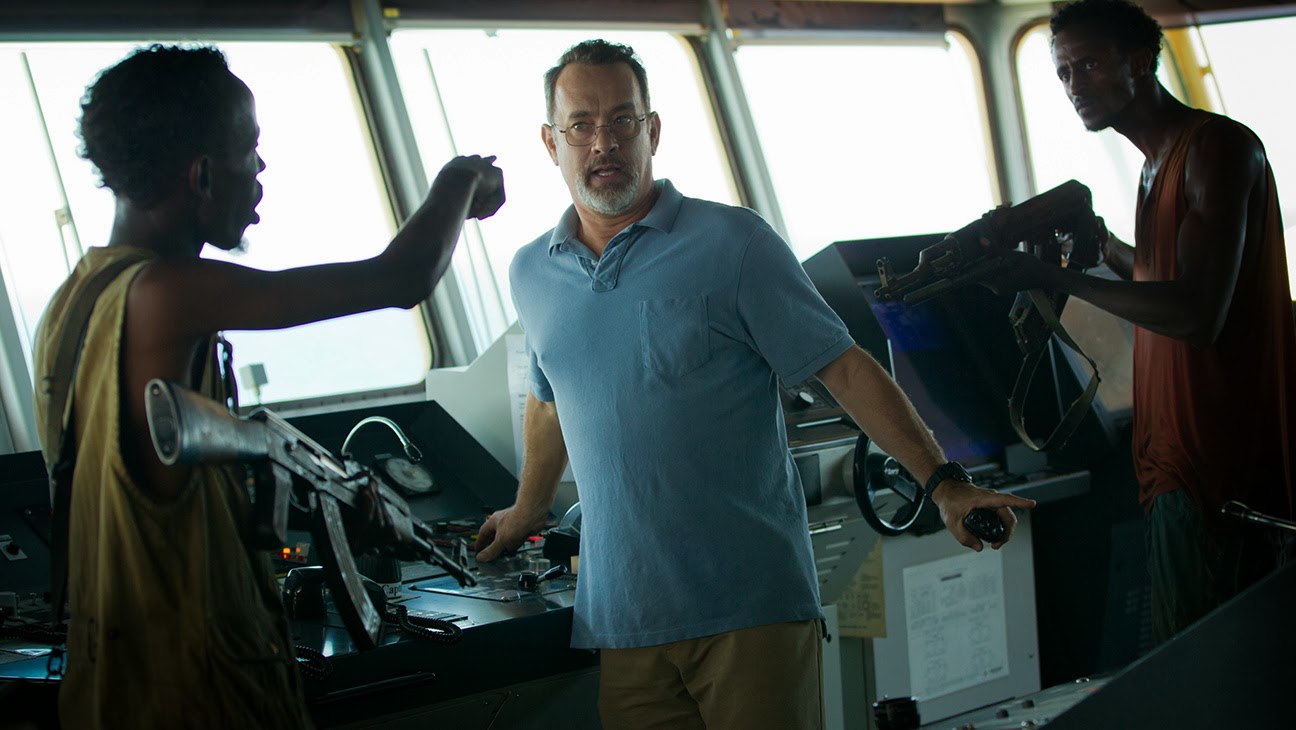 Movies like “Captain Phillips” have come with alarming regularity in the recent years, existing at the forefront of our cinema as a sort of piercing reminder of our continued inability to prepare for ensuing human catastrophes. The director Paul Greengrass, who also made “United 93,” seems possessed by this stigma to almost activist levels, and here is a movie that plays with an underlying sense of protest at what the characters endure for two whole hours. That doesn’t seem out of place, in a way, because it’s practically impossible to observe such details with neutrality. Like “Hotel Rwanda,” “Zero Dark Thirty,” “Black Hawk Down” and “The Last King of Scotland,” this is the kind of film that possesses a discernable statement about the world we live in, and wraps it in the artistic style and urgency that is synonymous with inspired moviemaking. It is unfortunate that humanity continues to repeat the same grievous errors, but how fortunate we are to have movie cameras there to remind us how important it is to learn from the mistakes of the past.

Tom Hanks plays Richard Phillips, the pragmatic captain of the Maersk Alabama, a freight ship tasked with transporting materials across Somalian waters. At the start of the picture, Phillips comes to the job as if it were a mere reflex, moving crew members to posts, scolding them for extended breaks and barking announcements over the intercom with the precision of a man whose experience precedes him. Meanwhile, we meet a Somalian named Muse (Barkhad Abdi), who is seen as low on the totem pole of an assemblage of money-hungry pirates until he overpowers one of them physically, and then assumes leadership of the group. They observe ships on the water like hyenas waiting for one to wander from the herd, and when the Alabama’s course takes it away from the primary formation, they seize an opportunity to pursue – and then capture – the ship for purposes of thievery. Needless to say, Phillips suspects this early enough to make a concentrated effort in resisting the pursuit, in a sequence that is perfectly paced and consistent in developing the momentum.

Alas, Phillips’ attempt to prevent the hijacking is a failure, and four pirates – including Muse – manage to get on board with heavy artillery. While the majority of the crew stows away in order to prevent elaborate hostage situations, three of the crew members – including the captain himself – are isolated in the cabin under the threat of violence and death… unless they can cough up some money. The pirates insist that the ship is valuable; Phillips offers them a sum of $30 thousand, which is all the money contained in the safe. One of them insists there is more, and another insists the ship may be worth millions. Then there is an assertion that the vessel has been made nonfunctional because the crew’s attempt to outrun them has destroyed the engine, a fact that Muse suspects is nothing more than a stalling tactic. The pirates hold the captain at gunpoint on an excursion to find missing crew members in ship corridors. One sneaks away from the engine room to shut off the generator, making it difficult for the pursuers to navigate. Random glass is left in a doorway to cut the foot of one barefoot pirate. And then after one of them is ambushed in the dark, a situation escalates where the pirates escape with the $30 thousand, a life boat and the unlucky captain in their possession.

The key to the characterization of Richard Phillips comes down to its precise writing; because he assumes the role of a man under the influence of unending professionalism by engaging with his co-workers with camaraderie as well as authority, there is never a doubt in the minds of his people (or us) that he is not in full command of his mission or his mind. That may be a key concept to some, I suspect, who come to the movie with preconceived notions to the contrary; if any uncertainty exists in his ability to react effectively to the prospect of a hijacking, the screenplay by Billy Ray abolishes it. The irony (some might call it audacity) of the film is that its antagonists aren’t so much straight villains as they are conflicted wrongdoers capable of some gray areas. Because they are essentially victims of a merciless social standard that has been brought on by globalization, their actions come from a place of relative experience. The most critical piece comes in the form of the Muse character, whose leadership of a faction of pirates comes more out of a rage brought on by intense peer pressure, and whose ensuing actions are rationalized on the basis that things, even for Phillips, will work out to everyone’s benefit in the end. In a post-9/11 world where political and military enemies are seen with more black and white, this outlook is fairly refreshing.

The movie is anchored by performances as easily as it is by narrative details. Tom Hanks, so consistent an actor in mainstream Hollywood, is in top form here as the smart but composed victim of a dangerous hostage situation, strengthened by his training in early scenes and then unnerved to the point of mental and emotional breakdown by the time the movie churns to a very tense climax. Hanks plays these scenes with such understated truth that there is little hint of us consciously accepting it as a mere performance; it is the closest he has come to effortlessly embodying a person, I think, since Forrest Gump. The shy and unassuming Barkhad Abdi, meanwhile, steps into the Muse role with sublime exactitude, and his eyes occupy a quality that suggests he isn’t simply reciting dialogue; it’s as if he believes he is participating in the conflict. If there is a weakness in the movie, however, it’s that it uses the minor roles as platforms for the action rather than addendums to it. None of Phillips’ crew, in fact, is seen in the film beyond their captain’s imprisonment in the lifeboat; the movie seems to dispose of them as if something inconsequential.

Minor quibbles aside, it’s impossible to ignore the impact of “Captain Phillips.” The script, adapted from the book written by the actual protagonist, is not romanticized or glossed over with overreaching sentiment, and Greengrass’ direction matches it with a style that is consistently tenacious. Events that transpire occur with the urgency of some of the great military thrillers of the past decade, but it doesn’t overburden itself with tactical details; the movie’s most important quality lies in the faces of characters, and in their gazes emerge the unspoken certainties of our era’s most notable conflicts. Perhaps it is impossible to fully comprehend the toll an event like this could take on the human psyche, but by the end of the movie we suspect everyone’s suffering, in a way, exists as a means to alter a vicious cycle. Good movies have the capacity to fill us with knowledge, but great ones encourage us to integrate it into a collective experience.

Drama/Suspense (US); 2013; Rated PG-13 for sustained intense sequences of menace, some violence with bloody images, and for substance use; Running Time: 134 Minutes