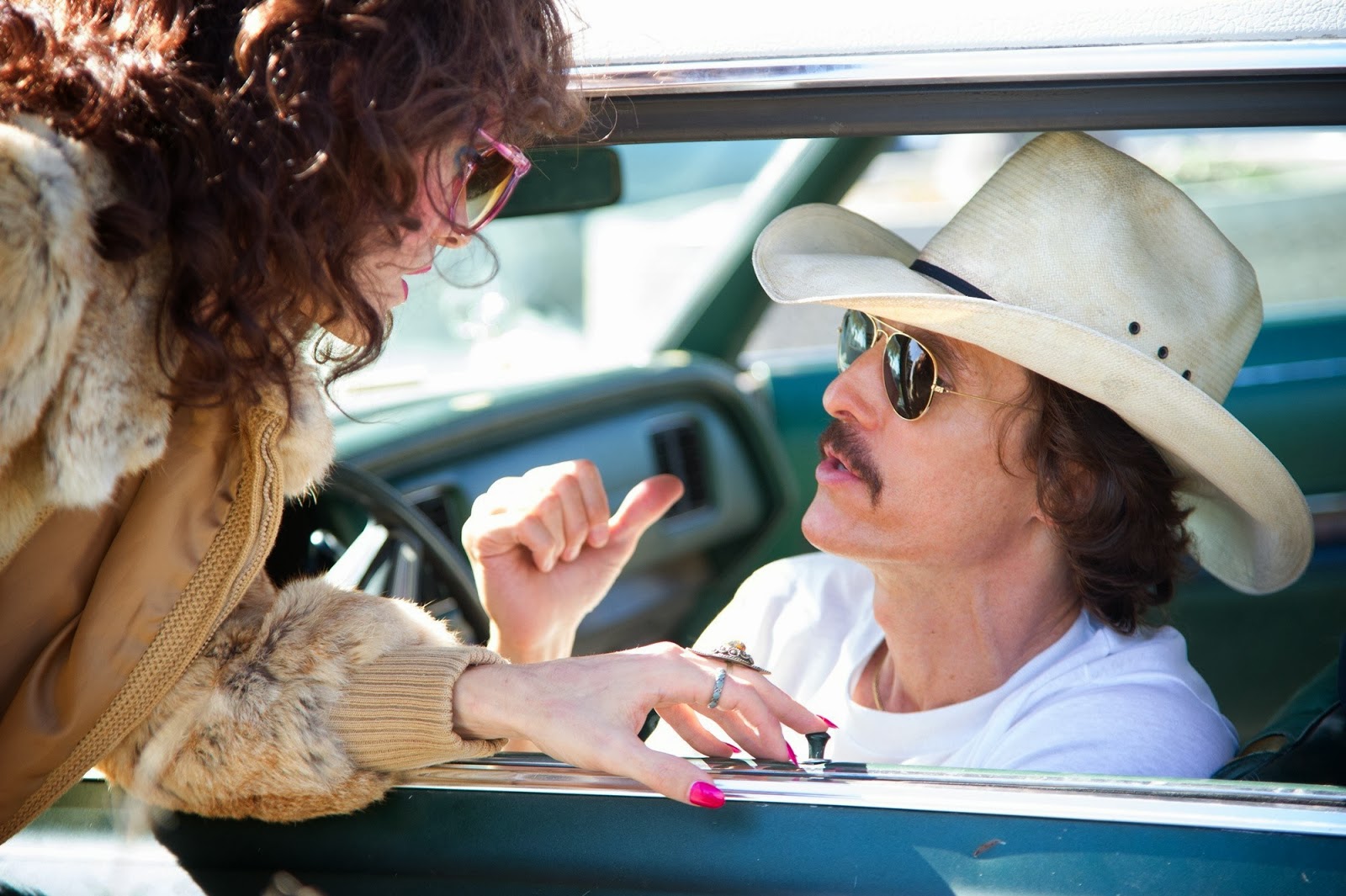 His performance at the center of “Dallas Buyers Club” is of a quality beyond our wildest expectations. The moment he steps onto the screen, there is something transcending about him: as an unglamorous and conflicted Texan whose bout of tragic news sends him on a journey of uncertainty, he doesn’t simply exist to further a subliminal thesis; rather, he absorbs the material into a characterization so mentally and physically eroded by human circumstance that it overwhelms basic conviction. There is no sense that McConaughey is able to detach from this material; after enduring an extensive physical transformation for the part (reportedly losing 50 pounds for it), he is enslaved by the story, and plays through its passages with courage, insight and a remarkable sense of professionalism. No performance of 2013 has been this rich, or indeed this important.

McConaughey plays Ron Woodroof, a mean, vulgar and ignorant cowboy whose world perspective shrinks him to the routine of common middle class hicks in the backwoods: shady gambling at the rodeo, run-ins with the law, cocaine parties and wild sex with random women. While on an electrical job at a Texas plant, his almost emaciated figure is sent into a tailspin when an accidental electrocution results in the obligatory hospital visit, and doctors – including one played by Jennifer Garner – inform him that his blood work reveals he has a progressed form of the AIDS virus that will likely kill him in less than 30 days. These grim facts are heightened by audience foresight that the movie takes place in 1985, when the crisis associated with the disease was at its most horrific, and an early scene in which the homophobic main character bursts out into a verbal tirade about Rock Hudson’s own HIV status and subsequent death places a distinct irony into the events that follow him.

A new sense of drive and determination are the fallout of the prognosis. Close buddies shun him because of what they perceive as “faggot blood” making him dangerous to be around. His trailer park locks him out of his own house, and neighbors paint obscenities on the walls. When news breaks that a very experimental treatment drug called AZT hits the streets, Ron’s inquiries are reduced to immediate rejections, because the hospital doesn’t find him a viable candidate because of how far his disease has progressed (although a hospital employee does sneak him a few dosages). That sets him off on a research spree that eventually takes him to Mexico, where the proprietor of a local clinic introduces him to a drug therapy not yet approved by the FDA, but one that comes with only a fraction of the side effects caused by AZT. Inspired by the results (his 30-day life expectancy turns into months, and eventually years), Woodroof loads up the trunk of his car and smuggles the drugs into Texas, where he sets up a local membership-based club that provides the treatment to clients also dying of the disease, straight or otherwise.

The rhetoric of an AIDS diagnosis in the 80s was that it was pretty much an immediate death sentence, but “Dallas Buyers Club” argues that the key to a prolonged survival was out there long before the cocktail drug therapies of the late 90s, and perhaps having nothing left to lose in those early days drove one man to the brink of a discovery that could have changed the landscape with the right government support. Because federal funding for the epidemic was limited for several years after its discovery, FDA regulations and limited testing meant that the pursuit of a cure was far beneath the standard it should have been; millions of men and women afflicted with the virus died within two or three years of infection, and the disease – one of the smartest and most adaptable of all biological viruses – continued to spread drastically, until it became part of our daily dialogue on the importance of safe sex in our culture. Ron’s audacious decisions put him in the crosshairs of legal authorities for a good portion of this movie, but what exactly do they fear: potential research on drug treatments being undermined, or their business being circumvented by someone two steps ahead of them? Movies have little sympathy for the routines of government institutions, and the Food and Drug Administration takes a beating here that, maybe, is quite justifiable.

The movie isn’t simply well acted or written; all of its observant qualities and pitch perfect performances are married to a tone and method that are courageous in conviction, and the director is just as motivated by dramatic fallout as he is by historical details or consequences. Because the psychology of AIDS often means that people hold mirrors up to themselves following a diagnosis, there is a notable shift in outlook in the Ron character; formerly homophobic, vulgar and stubborn, his loss of the core friendships and then the subsequent interactions he has with an HIV-infected transvestite named Rayon (played by Jared Leto) temper his outlook, although the movie doesn’t arrive there in a forced manner. This is acknowledged quietly in one brilliant scene in a supermarket, where Ron forces a former buddy to show the Leto character some respect by shaking his hand; later still, when Ron returns from a trip to Japan and finds Rayon has taken gravely ill, his instinct to rush immediately to his unlikely friend’s side is inundated with vicious outbursts inspired by an underlying grief. The bond between Leto and McConaughey is the emotional spine of the screenplay, and the performances are a triumph of embodiment and fortitude. Seldom has such synergy between two actors been so effectively heartbreaking; the recent Academy Award nominations bestowed on each are inarguably deserved, I think.

The movie was directed by Jean-Marc Vallée, a filmmaker of obscure Canadian endeavors whose knack for being unflinching in the face of heavy subject matter is a revelation, especially in these times of deep social insight. He has equal support from a screenplay that does justice to its characters while still utilizing them as pieces of an overreaching message, and the movie stays committed to this cause for its entire 2-hour running time. Does it hold relevance in a time when the severity of the AIDS crisis is being dealt with much more clearly? I think so. With the passage of time and the softening of the HIV stigma as a result of countless drug therapies that prolong the lives of patients, new generations are beginning to lose sight of the bleak origins that afflicted us as a society when the virus broke out three decades ago. Few alive from those days were untouched in some way by the tragedy, and its victims often fought courageous battles, usually as a way to pay optimism forward in the face of certain mortality. “Dallas Buyers Club” may very well be one of the best movies ever made about the subject, but more importantly, it is a truthful reminder in all of us that fighting for your life is often the bravest battle one will ever face.