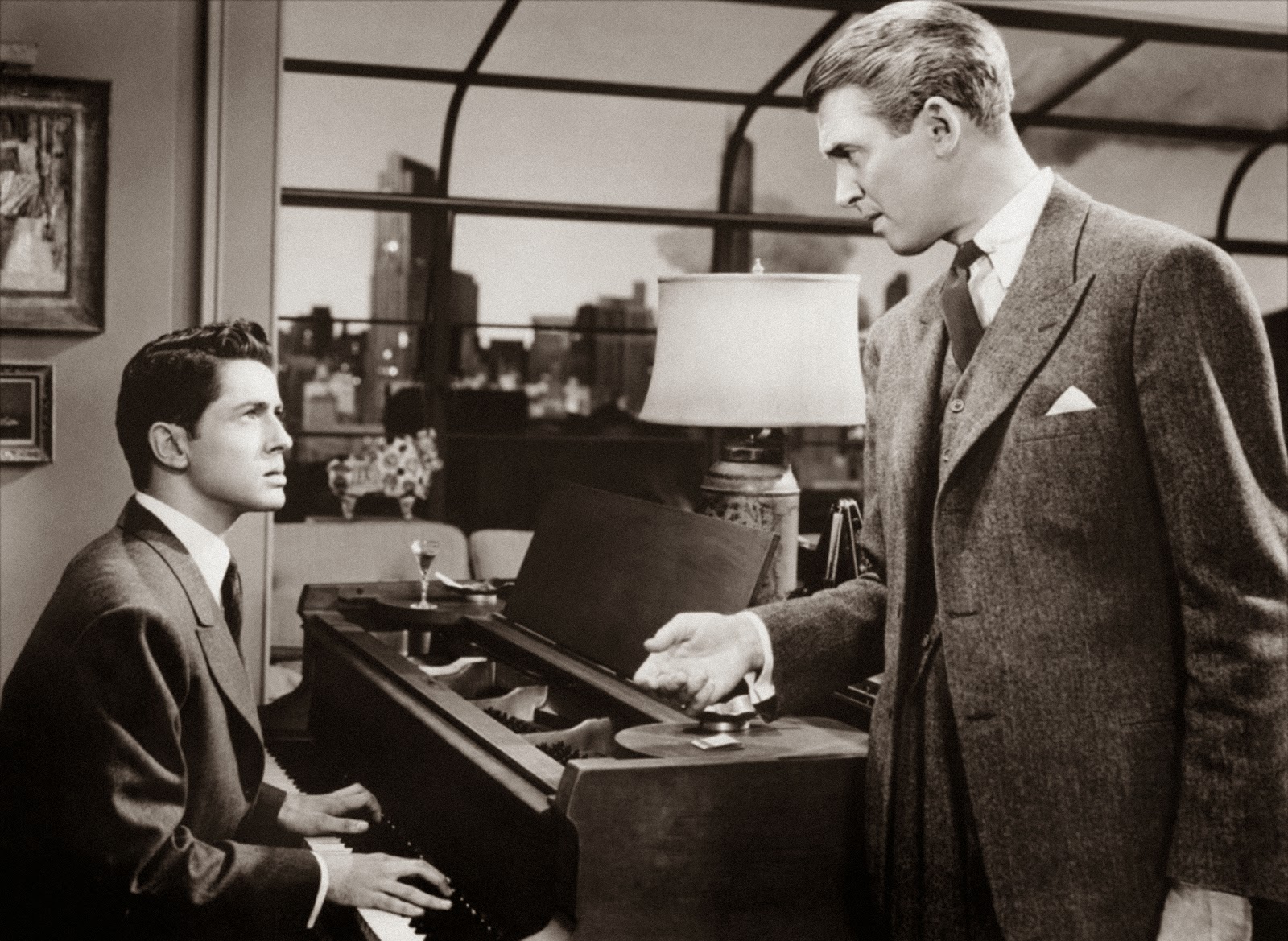 Some crimes are committed out of desperation, others for reasons of unfathomable frivolity. The audacious gentlemen that set the events of “Rope” into motion are intelligent and distinguished guys who seem to find a perplexing median between those two extremes: they believe that murder is a right given to the privileged, and victims are selected based on a perception of inferiority. The subject has been the source of constant deconstruction in thrillers as far back as the 30s, inspiring audience intrigue ever since Fritz Lang’s “M” showed a reprehensible child murderer wandering the streets of Germany while whistling an ominous tune. But here is a film that does something deeper and more fiendish: it confronts that notion head on, and does so with a chord of honesty that doesn’t diminish the actions with guilt or forethought to consequences. Phillip and Brandon have undertaken this heinous act entirely for the thrill of danger, but the finality of that moment plays like mere foreplay to a lengthy and tense night of social interaction, and dancing on the line of discovery is, we suspect, their real payoff.

None of this might have worked in hands less capable than Alfred Hitchock’s. Filmed entirely on a sound stage over the course of one month in 1948, the story (adapted from an old stage play) unfolds in a single 100-minute stretch of real time, beginning with that inevitable shock of a sudden slaying and ending with a powerful realization on the thought process of intellectuals with fearless impulses. What occurs in between goes to the very basic core of the great director’s flair for dramatic intensity, and yet the movie doesn’t so much borrow the trait as it masters it into a jolting display of subdued thrills. I have seen the movie a handful of times over the last ten years, but each time I return to that stuffy New York apartment I find myself immediately caught up in the urgency of that night all over again as if it were the first encounter, consistently alarmed by the story’s key psychology and enlivened by the manner in which events unfold gradually and realistically until the inevitable climax demands us to confront the difficult truth. “Rope” isn’t merely a terrific movie; it is also a benchmark for which the intricate nature of the killer’s mind can be simplified into immense clarity.

The opening shots emphasize the startling stress of the situation: still fixed on the quiet streets below their high rise apartment, the camera stalls until it hears a bloodcurdling scream carry over, and it rushes into the room of a high-rise apartment just in time to witness the victim’s body go limp. The fatality’s name is David Kentley, and he is quickly overpowered and slain not out of hatred or revenge, but for a desire to “feel alive” by those still clutching the rope. The two inevitably come to fundamental disagreements about the finality of the act; Phillip, unnerved and regretful for what has just transpired, finds it incredibly nerve-racking to stash David’s body in a cabinet very near to where a dinner party will be celebrating; Brandon, consistently calm and collected, experiences great stimulation in the result, and exudes a confidence and power over it that plays like ecstasy (he even lights up a cigarette as a celebratory gesture after the deed is done). The dissonance between their reactions is used strategically to further the plot’s underlying tension – will Phillip’s nervousness make him a loose cannon in a room full of suspicious observers, or will Brandon’s mask of attentiveness be strong enough to keep secrets from being revealed?

The two leads are instrumental in achieving this effect. John Dall, an obscure face in Hollywood until he landed the starring role of Brandon, approaches the material from a place of smug satisfaction that gives the performance an almost erotic quality, while Farley Granger, who later became Hitchcock’s conflicted athlete in his highly underrated “Strangers on a Train,” balances silence with desperation as the paranoid partner in crime like it were second nature. Adding weight to the authenticity of the characterizations is James Stewart, in the first of his four collaborations with Hitchcock – as Rupert Cadell, a former professor whose eccentric philosophy creates the grim scenario for Philip and Brandon to act on (while in turn providing him with an opportunity at redemption in the final minutes), he is understated and precise with the role, often downplaying traits that less structured actors would use as a way to chew up the scenery. Stewart himself later admitted he felt he was wrongly cast in the movie, but who else could have given a more mannered, thoughtful interpretation than the man who perfected it as far back as “Mr. Smith Goes to Washington?”

There is a great stroke of craftsmanship at work throughout the film. Shot in ten long takes, the movie creates an elaborate illusion that there is no cutaway or break from the action, as if to indicate a quiet observer is present in the room for the whole duration of the story instead of a mere movie camera (actual breaks do occur, though, most of them involving zooms into shadows at the end of one take and then panning back out at the beginning of another). Hitchcock was driven by this method because of its theatrical similarity to watching a stage play, and he believed a less straightforward approach would undermine the urgency of the material (audiences, in turn, found that innovative approach perfectly in line with the director’s knack for pushing boundaries). On the flip side, he and his writers, Hume Cronyn and Arthur Laurents, walked a dangerous Hollywood tightrope by portraying the two leads with a thinly veiled suggestion of homosexuality, which was daring in an industry not yet won over by liberal progression. No one can identify what the master of suspense’s reasons were in that narrative choice, but like the very subject of murder itself, we suspect his intrigue simply comes from a desire to understand it rather than exploit it (both were confronted perhaps more directly years later in his masterpiece “Psycho”).

Because “Rope” exists in that narrow span of time between the director’s early British endeavors and major Hollywood successes, watching the film is just as much a revelation as it is a rousing experience – ideas, approaches and thought processes emerge from a place of simplification, as if grand experiments only beginning to be perfected. And yet few times has such a direct and simple film collected so many resonating qualities in a span of a mere 80 minutes. The screenplay, so observant and precise with its premise, marries difficult themes with almost fiendish execution. The dialogue, so witty and insightful, plays precisely into the rich irony of the premise without directly exposing it. Characters – whether they are knowing, suspicious or blissfully ignorant – all possess the engaging qualities of the director’s greatest ensembles, and interact organically with the scenario they are placed in. And the most famous of the Hitchcock gimmicks – what I like to refer to as “the incriminating object” – is used to great skill here to further the advancement of necessary revelations (first with the rope being used to tie up a stack of books, and later when Rupert stumbles upon David Kentley’s monogramed hat in the coat closet). In a career that spanned six decades and some five dozen films, Alfred Hitchcock was the most inspired and consistent of all film directors – daring, suggestive, complex and precise in all the right ways, and constantly evolving in others. Here is one of those films that hurls all those qualities at us like a knife on a mission, even amidst the realization that the blade was a few steps away from being fully sharpened.