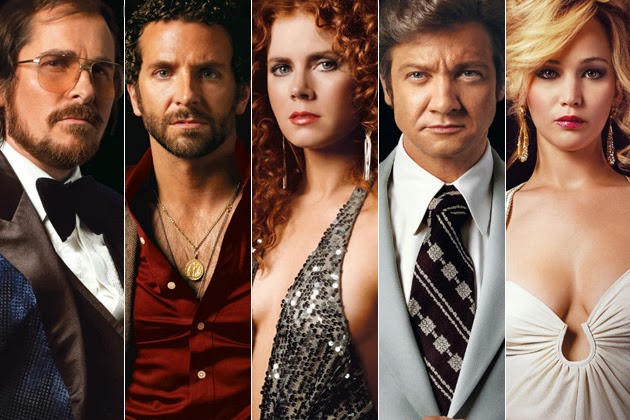 Movie enthusiasts occasionally need something to remind them of their love of the medium, and those endeavors that emphasize the pure joy of going to the cinema are usually the most striking. David O. Russell’s “American Hustle” is the latest of that elusive standard, a movie as perfect as they come. Somewhere during the manic struggle that occurs between filming and editing a picture, here was a director who caught sight of a powerful sense of inspiration, and tethered it to his work as a means of taking a fairly conventional story and giving it an enthusiastic footing. You can sense the intuitive genius weaving its way through the formula right from the opening scenes; whereas a straightforward depiction would have been dominated by subdued drama and actors caught in monotone execution, this film comes out swinging with an unmatched intensity, and captures performances that seem freed from the shackles of standard. To call the end result an absolute triumph would undercut more apropos labels; it seeks to be one of the best films of the year, and transcends that goal.

There is a company of modern American motion pictures that arrive at the core of such sentiments, and their infrequency adds to their magic. Think of the brilliant “Fargo” by the Coen Brothers, or Paul Thomas Anderson’s “There Will Be Blood.” A class of pictures like this is as rare as they come, because they reveal their genius through subtle convictions rather than grandiose self-awareness. What that suggests, ultimately, is that the greatest of possibilities still emerge in stories about real people with genuine conflicts, and only certain filmmakers are precise enough to unlock their rich secrets. Russell caught sight of this quality in his last endeavor “Silver Linings Playbook,” but has eclipsed it in what may very well be the best film he has ever done. After directing “Three Kings,” “Playbook” and “The Fighter,” he appears to be on his way to having his name forever etched in that elusive club of great directors of this century.

Much like “Fargo,” “American Hustle” uses the ruse of real events as a launching point for a great work of fictionalized drama. The movie is wise enough to own up to that – during the title card sequence, words on a black screen read succinctly, “some of this actually happened.” That is not so much a confession as it is a reminder to audiences that stories “based on actual events” are always at the mercy of creative license. The central character is Irving Rosenfeld (Christian Bale), a lowly dry cleaner whose passive existence is heightened by the arrival of Sydney Prosser (Amy Adams), an enigmatic woman he spies across a crowded room during a pool party. Almost instantly, their eyes meet in a deadlock of attraction. They smile, share anecdotes, and bond over Duke Ellington records. Attraction is their gateway to desire, then passion, and then eventually full-fledged trust – combined factors that motivate Irving to open up about a secret life he leads as an investor who cons bad risk clients out of $5000 finder’s fees in exchange for an “opportunity” to get loans from overseas creditors. His hope of including Sydney in this scam is met with an added layer of enthusiasm – because she likes the idea of pretending to be someone she isn’t, a British alter ego named Edith is born, and the two take on the world as mischievous financial deviants.

Mistakenly, their endeavors catch the attention of a hot shot FBI agent named Richie DiMaso (Bradley Cooper), who traps them both in their web of lies not as a way of prosecuting them for illegal activity, but as a means to acquiring assistance in unravelling much more elaborate con games. DiMaso suspects that local and federal politicians have a financial link to the New Jersey mafia, but infiltrating that world requires the insight of those who understand the game, and know how to deliver convincing ruses while closing illegal deals on video in hotel rooms (their primary target: a local mayor played by Jeremy Renner, who may be pressured into taking dirty money so that he can rebuild Atlantic City casinos). Irving and “Edith” so effortlessly manage their business that it makes them the ideal conspirators in this agenda. But are those goals the projection of the FBI itself, or only of an up-and-coming agent who is masking his opportunism in order to further his own career? Such questions are just as much a mystery to the characters as the audience, and Richie’s puppets weave their way through the game with underlying contempt in the process. During specific intervals, they also seem to be narrating their own existences, as if to stay ahead of any incriminating image the camera might portray them with.

None of this would work as well without ambitious characters in the foreground, and “American Hustle” contains no less than five primaries that take full ownership of this material. The story is set in 1978, but the movie marries the cultural sensibilities of its decade to the incisive humor of more modern ensembles. Many of the on-screen arguments were reportedly improvised as well, a notion that suggests the chemistry between actors is an authentic projection. That, of course, comes naturally for Jennifer Lawrence in particular; playing Irving’s deeply impatient wife Rosalyn – whom he refers to as the “Picasso of passive aggressive karate” – she seems aloof in the daily grind of life as a housewife but observes more than she lets on, and when there are confrontations with others, everyone is swept up by her pointed linguistic bravado. Similar can be said of the Amy Adams character, who commands a certain power over the men in the movie even after her facades fall; her confidence is highlighted by dialogue of impeccable awareness, and Adams swims through the story arc as if in full anticipation of the waves to come.

The two male leads also do distinguishing work, playing men with ambitious goals but deplorable conviction, who always seem to be aware of what lies ahead without fully comprehending the intentions of others. While Bale’s performance is understated and rich in subtleties, Cooper’s goes for the throat of ambition – he is manic and obsessed with the grandeur of success, even though it often leads to miscalculated decisions (in one memorable scene, he beats up his supervisor with a telephone but then shrewdly justifies his actions to the superior above him). What surprised me most, however, is how unglamorous each of them is willing to be for the sake of their movie. Bale’s Irving is portly and unkempt, with a belly obscured behind a 70s wardrobe and a bald spot covered by a bad comb-over, and Cooper’s Richie has short curls in his hair and an unbuttoned silk shirt to accentuate chest hair. For them, we get the sense there is a great risk in undertaking such transformations, but it underscores their dedication and enriches the performances (Bale, having already altered himself drastically in the past for “The Machinist” and “The Fighter,” now is on track towards becoming the most significant character actor of his generation).

One of the movies other central strengths is its ability to pace things around characters rather than actions. It doesn’t rush into twists or climaxes. It has patience. It follows those who are on paths of great deception, and yet is content to allow them to meander in their social gutter for as long as they deem necessary. Movies bothered by the constraints of a checklist formula would demand certain submissiveness for the determination of a serious plot, but “American Hustle” isn’t absorbed by those standards. The screenplay by Russell and Eric Warren Singer is no less effective; reportedly based on a series of real events that took place in New Jersey in the late 70s now referred to as the “Abscam” project, their historical context is a mere footnote in an endless series of brilliant sequences in which people engage in savage deceptions, all while the intrigue that surrounds them builds to one elaborate narrative crescendo. Details themselves are muddled (when characters discuss their intentions or reveal potential obstacles, half of what they say is lost in a haze of confusion), but I suspect that is an intentional impulse. Notice how eager the camera is, for instance, to ignore the whispered conversations that occur between the leads and potential villains – do the details really matter? In one scene where Irving is interrogated by perturbed casino investors who suspect interference from the feds, the movie cuts quickly back and forth between him and the Jennifer Lawrence character, who is cleaning the house while singing and dancing to “Live and Let Die.”

As a director and writer, Russell has found a certain irrelevance in telling thorough or coherent plots. There is a moment in his “Three Kings,” for example, when a confused reporter confesses that she has been covering the gulf war for several years, but quietly accepts the reality that she does not understand what the war itself is actually about. Perhaps, in a way, that one moment projects the sentiments of a career that finds deeper resonance it how stories affect people rather than the other way around. If a filmmaker like him has spent years searching for the highest summit to ascend, then “American Hustle” plays like the conquering of that goal. It is a masterpiece. But more importantly, it is also a reminder that the movies remain the most challenging and rewarding of entertainment mediums, especially in an era of evolving artistic sensibility.