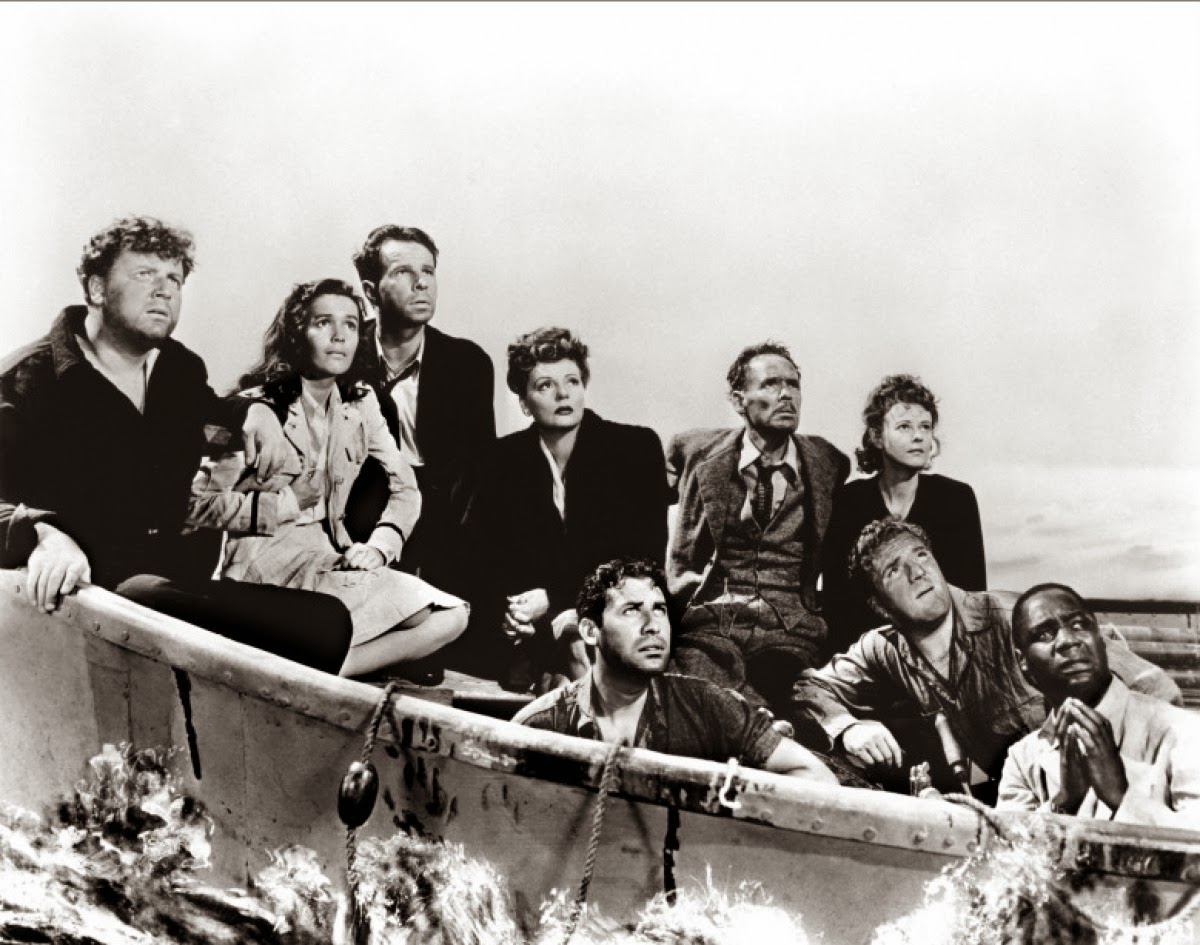 To be stranded on the open seas alongside Tallulah Bankhead would be a fate well worth the uncertain aftermath. While most actresses of the golden age were swept along with the current created by ambitious cinematographers, here was a force that unconsciously rebelled against all accepted traditions: robust and dominating, with a presence so intoxicating that all eyes – even those behind the camera – were immediately hypnotized by her splendor. Considered at the time to be the most popular stage actress of her generation, the audience’s love affair with her on the big screen was, alas, a brief one; outside her starring role in Alfred Hitchcock’s “Lifeboat,” a descent into the world of cinema included only a small handful of bit roles and cameos, not to mention a few isolated television appearances. Some, perhaps deservingly, chock that reality up to her stylistic resemblance to Bette Davis; already occupying the limelight as an eccentric beauty in full command of powerful abilities by the 1940s, Davis’ success cast a shadow that Bankhead probably had little chance of escaping from. Now her name drifts through the mind of most of today’s moviegoers like an unknown whisper, but her impact carries a distinct echo. The most famous of these relics: the villainess Cruella DeVille at the center of Disney’s “101 Dalmatians,” who was directly inspired by the late diva’s frank and often enthusiastic delivery of courtesies and euphemisms.

“Lifeboat” is as harmonious to the Bankhead presence as a horn is to a 40-piece orchestra. There are moments in the film where we just stare, in deadpan amazement, at how fluid she is amongst her co-stars, and yet totally in a league beyond their reach. She is the first face we see aboard the stagnant vessel, after an American freight liner is bombed by German submarines and an assemblage of survivors surface on the ocean waves. Somehow, inexplicably, the camera greets her already fully nestled into the boat like it were some kind of sea-bound throne; furs adorn her shoulders, a cigarette juts out between her fingers, and suitcases filled with expensive trinkets and gowns. She is surely not a woman dressed for the open seas. But who is she, exactly, and what is the source of such rude luxuries? After the remaining ensemble climbs aboard the boat in gradual increments, there are vivid exchanges meant to establish personalities. She is Connie Porter, a magazine columnist documenting the juiciest of stories and experiences on the front lines of World War II. Her stalwart but droll approach is contrasted by the hotheaded engineer John Kovac (John Hodiak), who appoints himself the leader of their party, we suspect, as a way of satisfying his own masculinity. The running joke (at least between them) is that her materialism and his gruff outlook are masks meant to hide a blazing attraction, and when events on the sea become more intense there is little resistance in them to succumb to it.

The characters all operate like pieces on a psychological chess board. Among them: Gus (William Bendix), a jolly sort facing an uncertain fate when his leg is badly injured; Stanley Garrett (Hume Cronyn), a radio operator with very perceptive eyes; Charles Rittenhouse (Henry Hull), a millionaire buried in pessimism; and Alice MacKenzie (Mary Anderson), who seems deliberately detached as a way to project her melancholy on others. Rounding out the collection of survivors is the enigmatic Willy (Walter Slezak), a German whose own ship was the same one that torpedoed the other, and now appears to be its only survivor. Though Connie is able to interpret and communicate with the foreign passenger, others are, perhaps rightfully, at odds with harboring an enemy of war. Kovac insists that he be imprisoned for their safety; Connie, on the other hand, feels that he has knowledge of the sea that could benefit their survival odds. Does her extension of faith prove to be true, or is Willy just another villainous figure of the totalitarian German military? The movie’s following 90 minutes is spent contemplating those fascinating conundrums, often arriving at answers that are hardly at the degree of black and white that most directors would have opted to utilize during that troublesome era of the mid 1940s.

The congress of characters plays like a gathering of figures from opposing walks of life, utilizing the privileged, the poverty stricken and everything in between as groundwork for an ensemble that clashes with striking consequences. Hitchcock was hardly the first director to utilize that approach in the movies, but his endeavor was probably the most influential; the vividness and energy of his characters probably inspired “The Poseidon Adventure,” another film about random strangers who are brought together by disaster on the seas. That may be in part because the story, originally written by the brilliant Jon Steinbeck, is not so much concerned with the survivalist connotations of the plot as it is with the in-the-moment uncertainty of human faces. Because seven men and women share a space with a man who may or may not undermine their endurance, the screenplay is allowed to surround them in quiet tension, and Hitchcock’s direction creates a memorable space for claustrophobia to overwhelm the scenes. The dialogue, in retrospect, disguises those motives with effective little barbs, mostly from Bankhead (“I never understood making a billboard out of one’s torso,” she says to the bare-chested Kovac in one scene, referring to his tattoo). Many of the lines were reportedly improvised or written in by the actors themselves, suggesting there is tangible benefit in a story like this for having the actors take full control of their roles. But this, if you think about it, also contradicts the Hitchcock doctrine of later years, which suggests that every little detail can’t possibly be efficient unless it is being controlled by a master manipulator behind the camera.

The thumbprint is certainly there, however, in technical respects. Many of the film’s key shots are framed with precise focus and clarity, and his cinematographer Glen MacWilliams had an impeccable ability to wash out the extreme contrasts of the actors faces in order to cast them in ominous greys (the famous shot of all their shaded silhouettes quietly looking to the west at the sunset is one of the most striking of any early Hitchcock picture). The lifeboat scenes were shot on a sound stage in a giant water tank, but the backdrop is edited into them so believably that there is never a sense that we are just watching random stock footage spliced behind the action. The performances, meanwhile, have that an underlying quality of building madness, as if one is to suspect that everyone was pushed to extreme exhaustion by their laborious director as a way of connecting them directly to the characterizations. Knowing about some of the wild antics on set too (including the fact that Bankhead refused to wear underwear while filming), a portrait of impeccable synergy envelops what we see and observe, and the result is highly successful.

To see “Lifeboat” now, in context with the plethora of amazing films left behind by the most influential of film directors, is to see a master refining and mastering his then-evolving forte. It was the only film he made for 20th Century Fox, and exists in that transitional span between his ambitious British films and the more populist endeavors of his later years. What does it say to us in hindsight, however? The message, I think, is more resonating for those who have experienced the filmmaker beyond the broad strokes – because he spent more time in the trenches of outlandish yarns, to see him make a movie about people tormented by reality is, in a way, useful with perspective. For audiences of today, desensitized to the casual prowess and subtlety of the older filmmakers, the result may come off as tame, often dreary. It is not considered in fashion to connect with the tormented outlook of a bunch of wise talkers, after all. Others, on the other hand, may find the dialogue-driven antics of a bunch of downtrodden talkers very Shakespearean in nature, even if it’s out of synch with the directness of the Hitchcock standard. But a movie is nothing if not an embodiment of an idea born of its time, and here is the closest the director probably ever came to making an insightful statement about the dreadful world he and his peers actually lived in. The irony of these eight frantic souls is that they are already united in their cynicism of a war-torn culture long before they are relegated to drifting aimlessly on the open seas, and to them, occupying space with a Nazi may just be the final sign of their world devolving into despair. What a depressing commentary it is, indeed, to find oneself fragmented by suspicion in the face of a reality that should inspire unity and endurance.