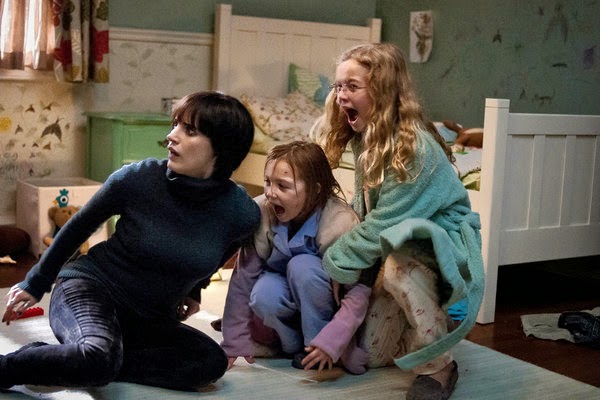 Two little girls are whisked away nervously by an anxious father in the early scenes of “Mama,” and after his car crashes into an embankment during a snowstorm, they become stranded in the woods where they wander into the murky halls of an abandoned shack nestled between withering trees. No one lives there upon close inspection, but the shadows seem to vibrate with a certain existential tension – as if some kind of ominous energy remains behind, implying silent threats. Unfortunately, the ensuing actions of the rattled father cause whatever is there to manifest in the form of a chilling ghost-like figure, and when his form is consumed and the girls are left behind to fend for themselves, they make a connection with the presence that will inform their growth over the next five years. Because each is no more than a couple years old at the time of their abandonment, age passes and isolation shapes them into feral, speechless creatures that walk around on four limbs – traits that are not easily breakable once the times comes for them to be integrated back into civilization. When their whereabouts are discovered and their uncle comes rushing to their rescue, in fact, there is almost no immediate connection between them: only vague remembrances buried behind primitive survival instincts.

Their uncle, a sketch artist named Lucas, is played here by Nikolaj Coster-Waldau in a performance that must have been as challenging as it is passive. It’s easy for a supernatural fable to provide the obligatory set up and allow the remainder of the work to be done by actors who can ham up their visible enthusiasm for two hours of sensationalized images, but this is a guy who must remain tight and patient with such opportunities, because “Mama” has many other things in mind. Familial association is, furthermore, a mere formality in this rather twisty story; of all the unknowing adult stars who have yet to piece together the psychological puzzle following these two poor girls around in the shadows, it is Lucas’ girlfriend Annabelle (Jessica Chastain) who becomes saddled with the primary responsibility of seeing them through their turmoil. Why does it go that route? The reason, I suspect, is more obvious to audience members who understand the difficult nature of having to live life without a mother at your side. There is a void created by that kind of drastic loss – especially at a young age – and maybe, just maybe, the concerned impulses of a woman are exactly the kind of strength a young soul needs to find their way back.

Back from what, you may ask? Poor little Victoria (Megan Charpentier) and Lilly (Isabelle Nelisse) did not exactly spend their last five years alone; no, the early tragic loss of a mother figure was coddled and nurtured by the presence of a ghostly woman in the cabin they refer to merely as “Mama,” who fed and kept them alive and now continues to engage them following their recovery into the civilized world. She remains hidden – often with jealousy – from the adult figures, but gives off all the traditional movie warning signs: noises around the corner are cause to pause, and strange randomized occurences create momentary alarm, especially when a child warns in whispers: “don’t go into that closet.” Once the older Victoria begins coming out of her primitive routine through hypnosis with a family psychologist (Daniel Kash), she begins sharing stories of their experience – and through those details, the identity of “Mama” begins to manifest. Who is this ghost? Is it just a split personality invented by Victoria to look after her Lilly? How did they manage to survive so long without a living adult figure? When a story emerges during a psychiatric session about a mysterious woman who stole her baby and then jumped into a freezing river nearby, it stirs the doctor to do some serious investigation, culminating in the shocking reveal that spurs the adults into action in preserving the lives of these poor little girls before the apparition repeats her tragic history.

There is not a single moment of the movie that isn’t already familiar to ghost story enthusiasts. The pattern is one of the most consistent: ordinary people are caught in a predicament that puts them into contact with a force from another plane of existence, and they are spurred to investigation before ultimately discovering that there is an unspoken reason as to why such forces haunt – and sometimes kill – those who wander through their unending curse of agony. But “Mama” is not blinded by subversive notions to the contrary; it knows these details are familiar, but never ceases to try and make them part of a thoroughly fascinating premise. Our expectations are often realized right down to the finest details, but there is no boredom or complacence in any of the scenes, and the actors meander through the murky waters of their conflict in a consistent state of patience and believability, as if genuinely unaware of what else could be waiting around a corner or in a darkened room. Sometimes, we can’t blame them; though the material seldom strays beyond the obligatory routes, nearly every moment of this 100-minute excursion is filled to the brim with revelations, ambitious subplots, unfortunate incidents and alarming confrontations. If horror movies can be regarded for their degree of effort, then here is one of the hardest-working of the recent past.

Often, those particulars emerge with a certain distinctive visual flair too. The special effects are clean and precise, and do not make the mistake of over-extending the possibilities of an image’s promise – a common misgiving about many genre pictures. Because the story is in no rush to deliver critical reveals either, that also means the filmmakers are content to spend time on creating good atmosphere as well. The cinematography is sweeping and sharp, and seems stirred from more lofty ambitions than ordinarily reserved for horror movies. The editing is also not hasty or convoluted, even during many of the most tense moments. And the movie’s ambiguous villain – the notorious “Mama” ghost – is a display of such stark and angular details that she is, legitimately, rather creepy to witness on screen. Show me another recent movie in which a ghoulish phantom actually made the hair on the back of your neck stand up, and I’ll show you “The Ring.”

One particular detail of the story, alas, sticks out as a glaring oversight. When the picture opens with that critical life-altering moment in which the girls’ father swerves off of an icy highway and crashes into a tree further down the embankment, it creates a baffling sense of narrative displacement. What are the odds that not a single person – on foot or in vehicle – ever noticed the remains of that car until five years after the accident? Because the movie implies that the haunted cabin was fairly close to the scene of the accident, we object to the likelihood of the scenario, even though we are required to accept it as part of this series of tragic events. Still, when two guys and their dogs accidentally discover the vehicle – and quickly find the cabin right after – their endeavors seem like quick cop-outs to propel the remainder of the story forward without any regard to likely outcomes. If ordinary people are really that detached from a situation to not notice such an obvious crash that close to the highway – especially in context with a worried uncle’s frantic search for his brother and nieces for five full years – then that suggests something unforgiving about the nature of adult observation.