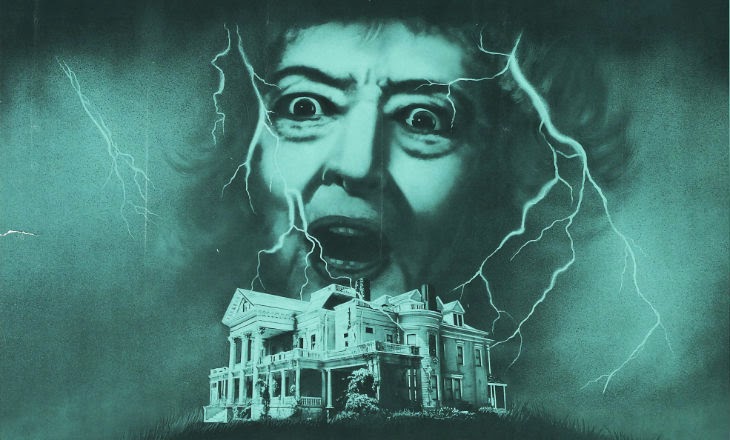 “Burnt Offerings” is one of those all-too-familiar movie detours through the doldrums of horror mediocrity, a film about a family of would-be caretakers who decide to leave behind the bright lights of the big city and spend the remains of their summer in the comforts of a charming countryside mansion that is being rented to them by, we gather, rather suspicious owners. Because they proceed to live in said property without the slightest awareness in the conventions of basic movie composition, that presents immediate disconnect in creating a relatable experience. What people in their right minds would so eagerly agree to submit themselves to such a shady arrangement given the nature of the scenario, which involves two elderly – and rather creepy – homeowners who insist on leaving their mother behind in an upstairs bedroom for the caretakers to look after? Did it not strike a mental chord in any of them that a cheap price tag for such a stunning mansion might involve rather ominous drawbacks? Even little kids would howl with pessimism at this kind of nearsighted narrative entrapment.

What a perplexing time it must have been to be a moviegoer in the 1970s. Once hailed by film societies (and the mainstream consensus) as the age of big risks and innovative ideas, the movies seemed to be a conduit for newfound extremes – some of them profound, others audacious, and a few others loathsome. That the same decade gave birth to both the careers of Steven Spielberg and George Lucas as well as various film exploitation movements is a wonder of cinematic diversity. The existence of “Burnt Offerings” is, if nothing else, a mark of reinforcement on that sensibility: while its premise is a point of fascinating emphasis seemingly inspired by the evolving novelty of horror stories, the nonsensical delivery and the shoddy production are indicative of the flat-out laziness of movie studios hoping to win a quick buck at the box office. And the very idea that a movie this languid managed to lure in astounding talents like Oliver Reed and Bette Davis may very well be the saddest of its ongoing commentaries.

The film begins with ominous warning shots: the sight of a large house off the edge of a rural road that comes equipped with an air of immediate creepiness. That, needless to say, is not a sentiment shared by the leads: Mr. and Mrs. Rolf (Oliver Reed and Karen Black) drive up to the towering mansion, wander inside and are won immediately over by the relaxing promise of its expansive corridors. To them, the house and the property are the perfect final destination for a carefree summer away from home, for them as well as their son and beloved aunt. Unfortunately, their naivety is thick even by the standards of horror movie simpletons; when an elderly brother and sister volunteer to give them the house for a very low fee, their concern is nothing more than a momentary jitter. Okay, we can accept that. But how do they react when they find out they will also be housesitting the elderly mother of the Allardyce children, a woman who is never seen and never comes out of her upstairs bedroom? There is barely a blip of pessimism to register in their eager demeanors. And so begins an endless trek of strange, unexplainable plot scenarios that do their darndest to mystify for the sake of argumentative discussion points.

Oliver Reed plays the central role in the movie, a headstrong family figure that has made all the critical decisions in allowing his relatives to arrive at this suspicious locale, and yet is the only one who shows concern when the house begins to reveal its rather menacing intentions. Because he possesses the movie’s only thread of logical observance, we follow him with almost dogged interest – yes, even after the movie’s first obligatory twist, in which he attempts to strangle and drown his son without any prior provocation. What inspired that moment of madness? A well-trained audience member will likely conclude that something in the pool water must be intoxicating the swimmers. Those would be good guessers. So what does the screenplay have his character do on the very same night of that near-fatal ambush? You guessed it: have him skinny dip in the same pool with his wife as if nothing happened earlier in the day. The whole movie works like that, unfortunately – something foreboding (and life-threatening) gives everyone a cause to pause in great fear, and then in the next instance has them all return to the complacency of their summer retreat as if all things unordinary are easily dismissed. Are these characters at all, or just globs of flesh operated by goldfish brains?

If Reed is grossly mislead in this material, than his counterpart, Karen Black, plays through it all with almost obsessive heavy-handedness. There is not a single isolated moment in which she emerges as a sympathetic human; early on, Black’s eyes sink back with almost cynical precision, and she smirks sheepishly through most of her scenes not as a wife or mother, but as pleasure-seeker lost in a cloud of malicious intentions. Because her poker face is so flimsy, it puts her into a position that unravels any possible momentum for this plot. The great Burgess Meredith has a brief scene early on in that inspires similar sentiments; over-the-top as a suggestive tool of foreshadowing, it’s as if he read the entire screenplay well before a single moment was filmed, and was unable to erase the giddiness of a shocking climax from his gaze. Bette Davis is at least effectively sublime as the sullen aunt whose deteriorating health is a consequence of the house’s startling changes, but of course she is; even in the late actress’ most lackluster moments (“Beyond the Forest,” “The Nanny”), the presence of an unending talent always overwhelmed the celluloid, and her power was such that it almost neutralized the experience of seeing something beneath her craft. Had she lived long enough to look back on this experience with fresh eyes, I suspect her response would have been one heck of a howler.

The fallback of a movie like “Burnt Offerings” is ultimately all about the haunted house itself – is it a visual wonder, or does it inspire tension just by merely existing? The director Dan Curtis does have a little fun with those implications; this is not a traditional house that possesses ghosts or self-moving furniture, but one in which unseen forces execute impeccable sleight of hand maneuvers that simply manifest in the manipulated psyches of the characters. Because it also regenerates itself following the unfortunate deaths of others, added layers of intrigue permeate from the material (similar to what “The Amityville Horror” achieved). But there was a much better movie that emerged from the Hollywood machine with similar connotations a mere four years later, and it had the ambition to marry those ambiguous sentiments with impeccable production values and genuine psychological undercurrents. It was called “The Shining.” On a chilly autumn night leading up to the Halloween festivities where a group of people are eager to see a convincing – and engaging – thriller about locales that unravel and then consume fractured human identities, there is no contest between this secluded mansion and the Overlook Hotel.

Spot on review. Such a ridiculously cliched movie.