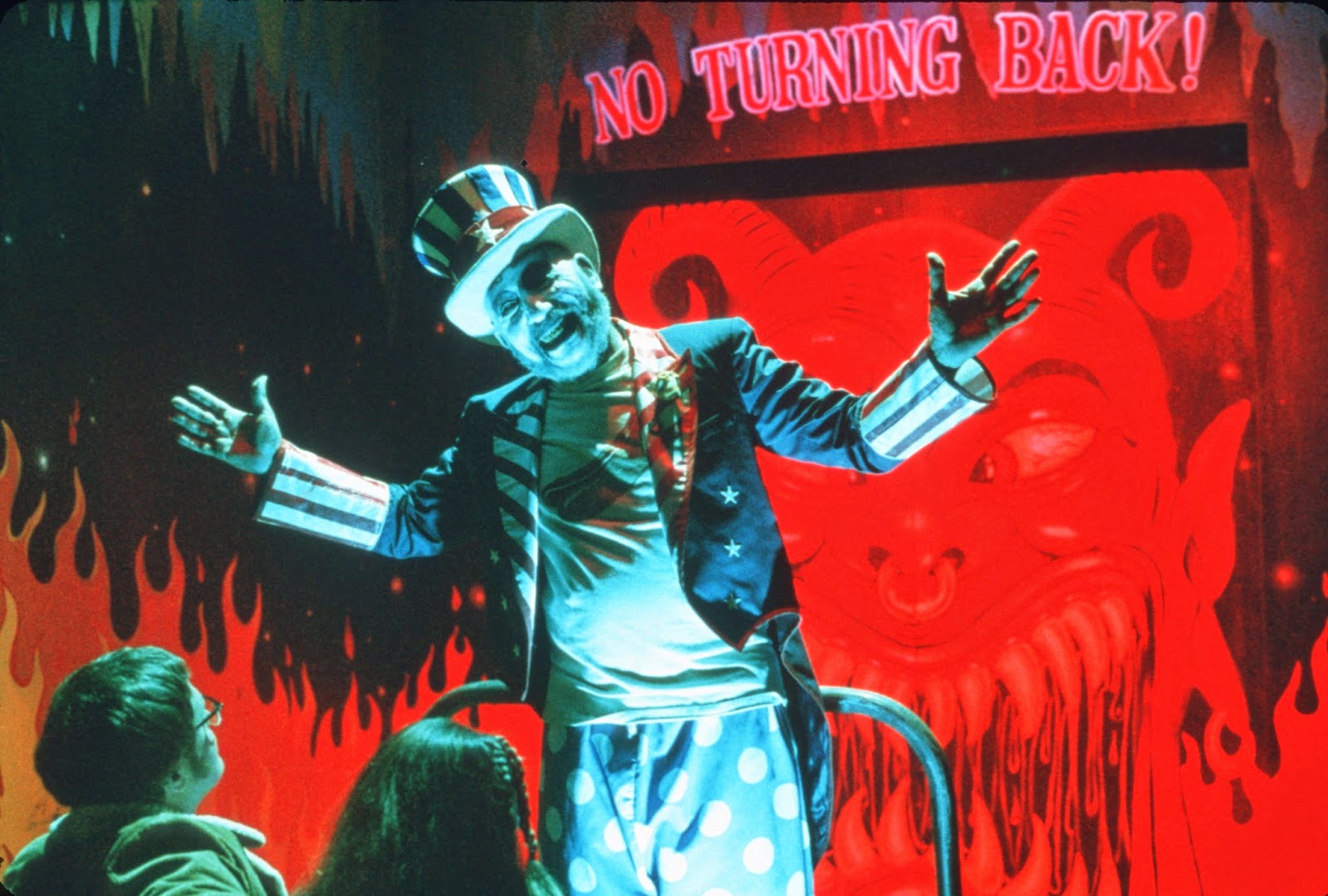 Rob Zombie’s “House of 1000 Corpses” is a movie by a man without any sense of modulation. The camera arrives in his possession like a discovery of unprecedented importance; standing behind it, the air of his enthusiasm seems to overflow with every sharp camera angle and quick edit that emerges from his zealous fingertips. For most first-time film directors, the opportunity to take one’s bizarre visual flair and incorporate it into the frames of a motion picture would be an opportunity worthy of some level of focus, however eccentric. Alas, here is a man so enamored by the notion that creative control has been passed to him that the end result lacks a central distinction, and meanders through five or six moods with extremely disconnected results. Somewhere underneath heaps of overwrought images and flashy cuts meant to, I guess, emphasize the schizophrenic nature of his screenplay (which he also wrote), traces of a viable filmmaker are aching to connect with encouraging audiences. Those who will herald his debut effort as some sort of profound revelation will not be picking my selections during late night horror movie marathons.

The anatomy of Zombie’s film isn’t exactly meaningless or loathsome, either. There is no inkling in him to reduce celluloid to a display of meaningless, hopeless vulgarity without context like so many modern directors have done in recent times. When one compares this movie to, say, the detestable “Chaos,” the distinctions are obvious: one is relentless and cruel with no tone beyond despair, while the other funnels its cruelty through an animated sense of perspective littered in almost satirical undertones. No, this is not a man who has descended into hell for the purpose of surrendering to it; he is able to drink it all in while managing to smile wryly in the shadows, even as blood pours from wounds by the gallons. So why does “House of 1000 Corpses” simply fail on so many other cylinders when it has the thought to consider a relatable perspective? The movie is wall-to-wall visual chaos impossible to wade through, and at the center of the madness are characters that interact with insightful diatribes but then lose their way in an endless display of grotesque splendor. Few times has a film descended this far into the snare of insanity, and yet become so cheerfully adrift by it all.

The movie opens as if it were caught in a detour through the nightmares of John Wayne Gacy. At a pit stop somewhere in the redneck wilderness of Texas on the eve of Halloween, a fun house full of crazy southern clowns with bad dental hygiene engage tourists with ambiguous suggestions about local legends. Their ability to sell the material with enthusiasm is not what makes them creepy, either; in an early scene, two men attempt to rob their establishment and are met not with fear or cooperation, but with sarcastic vulgarity that gives way to a bloody ambush. This moment is used to foreshadow the interactions they will all have with the next group of visitors: four twenty-something individuals who are in the area doing research for a book about backwater stops across the United States, who are eager to learn more about some of the murderous legends of Texas. The energetic Captain Spaulding (Sid Haig) is more than eager to indulge his visitors in that regard (their scenes involve a ride through his “Museum of Monsters” to learn about famous serial killers, among other things), and when he slyly eludes to the mysterious lore of “Dr. Satan,” the four decide to – what else? – wander out into the nearby wilderness to seek more knowledge about said legend.

Their journey lands them into the clutches of the Firefly family, a cluster of eccentric southerners that includes a loony mother (Karen Black), a slutty daughter (Sherri Moon), a disfigured overgrown simpleton (Matthew McGrory) and a devilish orator with bizarre artistic desires (Bill Moseley). Not a single one of them possesses any semblance of innocence, yet the four visitors interact with them as if unburdened by notions of impending danger. The movie’s most ambitious moment, in fact, is a floor show put on by several of the family members; as they await the repair of their car, they watch on with a certain level of passive annoyance, as if forced to endure it out of boredom rather than any inkling that there may be something devious waiting for them outside. When the time does come for the inevitability of a horrific reveal – the discovery that the Firefly family are all serial killers – it is done so as if interpreted through someone’s absurd nightmares rather than an actual revelation. Even with critical twists, “House of 1000 Corpses” is absorbed in comical showmanship.

What is Rob Zombie after here? The silliness of his tone informs his almost animated sense of style, but none of it comes together for any singular statement. Part of that may, in fact, be a direct consequence of being so over-the-top with his screenplay; his villainous family of southerners do not limit their impending cruelty to specific methods of torture or restraint, but seem preoccupied with a certain diversity of slaughter. There are a wide array of antics on display here ranging from dismemberment to cannibalism (culminating in a final scene underground when the obligatory survivor comes face-to-face with Dr. Satan), but not a bit of it is mandated. That is rather unfortunate when one considers some of the brilliant dialogue that precedes much of this mayhem – in one scene, for example, the Moseley character launches into an ambitious diatribe in front of a cluster of kidnapped cheerleaders that would, in most movies, become the precursor to something genuinely horrific. But the movie does not realize the nature of those possibilities because of the overpowering nature of its fantasy. In many cases, events aren’t even viewed to completion; Zombie cuts frequently between them, ominous news bulletins and grainy black-and-white footage carried over from a marathon of bad Halloween pictures. If it is now the nature of 21st century horror to beat its points into us without relief, then this is one of those movies caught in the parade of overkill.

And yet somehow, even beneath this insane carnival-esque presentation, the movie has its qualities. Some of the performances, including Sid Haig as the wisecracking clown menace and Karen Black as the whacko matriarch, are far better than the movie deserves. The psychology of the antagonists is fully realized, and one is always left with the sense that these are characters that genuinely believe in their convictions and will follow through with them until the last drop of blood is spilled. I also liked how miniscule the victimized youngsters were in Zombie’s grand display of horrors; his is a movie entirely about the mix of evil and insanity, and he wastes no time in offering any semblance of sympathy for the four who are destined to writhe in unending pain for 89 minutes. When it comes to finding the right tone and context for a story as depraved as this, here is a man who knows exactly how to dance on the razor’s edge of his subject matter. Who knows, maybe one day he’ll also combine such values with a style that doesn’t diminish its power under an endless array of excess.