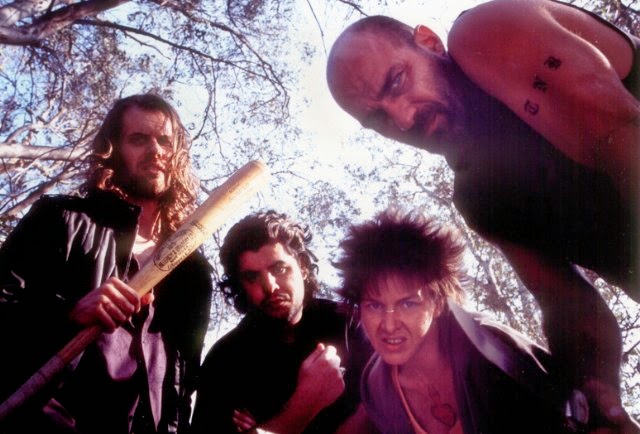 The concept of a human being’s brutal torture and murder is not an entirely pointless endeavor in the hands of those who see it as a legitimate discussion point. In the right context (or under the right guidance of a genuine craftsman), it can even resonate. But “Chaos” is far removed from the quintessential values of cinema, lacking all the modulation of style, tone and psychology that frequently informs more worthy endeavors. Every moment, any mere expression of nihilism contained in this horrendous trash, is never masked with purpose, and the material dances through its anarchy in a maddening display of technical incompetence, bad acting, tone-deaf dialogue and schizophrenic editing. Some may be okay with all of that, especially considering that the material essentially replicates the underlying narrative structure of Wes Craven’s “Last House on the Left.” If those are the sorts of people you keep company with on a regular basis, one hopes our social circles never cross paths.

The setup is simplistic for the sake of graphic grandeur: two girlfriends, both attending a rave somewhere deep in the woods, befriend a stranger in order to acquire some ecstasy, and are lured into the hideout of a ruthless gang of murderers where they are tortured, raped and them murdered (not necessarily in that order) over the course of one horrific day. After such deeds, they attempt to make a getaway by pretending to be upstanding citizens needing a place to stay overnight, and wind up being invited into the house of one of the murdered girls' parents. Craven cannot be credited with inventing that dubious premise (in fact, “Last House on the Left” was actually a remake in itself of Ingmar Bergman’s “The Virgin Spring”), but as a director he saw the idea from within a milieu of penetrating human consciousness. The result was a very depressing but effective horror film, and became the startling benchmark that would announce him as one of the more gifted filmmakers of a very decisive film genre.

The first of many mistakes “Chaos” makes is replicating that formula down to very obvious specifics, all while leaving behind the profound subtext of the basic idea that extreme human cruelty can sometimes only be answered in equal measures. Even the distinctive traits of the key players mimic those of the earlier film, right down to the nihilistic ringleader (Kevin Gage) to the awkward son destined for a tragic fate (Sage Stallone). Without the wisdom of a thoughtful perspective, however, the only distinctive difference the story takes this time is  with the ending, and even that is unforgivable; like the title itself, the final five minutes are such a disorderly display of cynicism that they violate one of the principal rules of all horror movies, which is to offer the audience a moment of respite before sending the villains off on a collision course with a blood-stained fate. I imagine many readers will be writing in protests that I am giving away the nature of the conclusion here, but who the hell cares? Anyone seeking out the movie for any purpose of curiosity will be getting exactly what they deserve.

The nature of the violence is perverse, almost immoral. The cinematographer films many of the most brutal scenes as if they are extensions of the killer’s line of sight, which adds an air of sadistic glee to the overall effect; it’s as if their unapologetic nerve infects the very nature of the celluloid it is printed on, further undermining the point. I once asked an independent filmmaker of exploitative horror movies if there were certain lines he refused to cross, and his answer, even now, seems like an apt yardstick for these sorts of pictures: “if there is a subject that you can’t reach catharsis with, then you shouldn’t be dealing with it on camera.” That DeFalco hones in so thoughtlessly on the material as if to imply it has therapeutic connotations insults the basis of for which we see such movies, I think. Consider, for instance, a later scene when the second of two girls – the more “innocent” of the two victims – is stripped down, tied up and proceeds to engage in a moment of private prayer before she is inevitably murdered with a very large blade. Though we don’t actually see the fatal wound, the resulting dialogue is an exercise in depravity that cannot be supported. How could any filmmaker go to such lengths and honestly think that moments like these could serve as legitimate warnings in a world already flooded by violence and mayhem? “Chaos” thinks it is prepping us for a harsh reality, but in the process seeks to only be a deplorable scare tactic. If it isn’t the worst horror film ever made, it is certainly the most cruel and senseless.