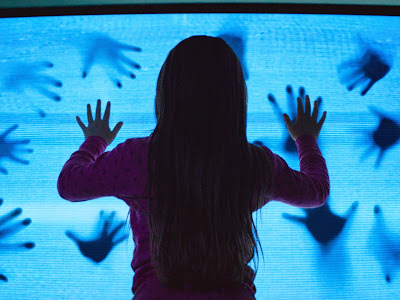 And so goes the obligatory demand for conventional spooks in a movie formula that has come, gone, thrived and died, and been resuscitated back to life in the skin of all sorts of modern conveniences too many times to count. It is an ongoing Hollywood fashion, especially now, to recycle the ideas of more perceptive film voices. Yet at a certain point, one hoped the trend that has befallen a plethora of notable horror films in recent years might have skipped entirely over the “Poltergeist” saga, if just for the reason that it remains such a distinctive isolated endeavor in a genre that more often demands open-ended accessibility. Directed by Tobe Hopper in 1982 and produced by Steven Spielberg, the unspoken virtue of the original was that it achieved a certain authenticity not from simple scares, but from the emotional weight it attached to characters that were propelled by genuine human qualities. Whereas most mainstream genre flicks in those days were content to absorb their violence in frantic displays of brutality, “Poltergeist” did the unthinkable: it spent more time studying the dynamics between characters, their behaviors, their exchanges, their admirable innocence and – most importantly – their shared love of one another during a time of supernatural danger. We cared about what happened to them because they embodied all the facets of people we live among.

Now comes a suspicious remake by filmmakers who have lost something in the translation. The setup is brief: parents Eric (Sam Rockwell) and Amy (Rosemarie DeWitt) are relocating their family to a new neighborhood that is more affordable while they get back on their feet, and a morsel of insight from their eager real estate agent seems to imply a foreboding undercurrent: “the price of this house is very flexible.” What’s the catch? Veterans of this story know the answer before it is even uttered: the neighborhood rests on what used to be an old cemetery, one in which the bodies of the deceased were conveniently left behind while the headstones were relocated on the hill. That knowledge doesn’t come to Eric or Amy until a dinner party later in the film, but by then they have already been ensnared by the menace that stalks them in the house corridors. And not so coincidentally either, their first of many windows between worlds is a giant television in the living room where communication with Madison is established, clearly because she is still at that young age where her senses have not been perverted by enough skepticism to resist their ghostly pleas for engagement.

Inevitably, the family becomes involved in a showy display of paranormal events that gradually increase in severity until Madison is snatched by the poltergeists through a portal in her bedroom closet, where they hold her hostage all while academic experts in the field of supernatural studies attempt to communicate – and then rescue – her from an unknown limbo. One of them is Carrigan Burke (Jared Harris), a local media sensation who cleanses houses of malevolent forces for television cameras, and his arrival inspires the most ambitious of sequences in which young little Griffin (Kyle Catlett) attempts to find the coordinates of his lost sister by flying his drone through the closet portal to the other side, all while using his tablet as a control. The vision of the ghostly plane is, I must admit, not without its strengths; dark and menacing (and certainly unique), its walls seem to be made of the writhing flesh of rotting corpses, occasionally punctuated by death gazes that pass the camera in a blur of shock and creepiness.

But there is no time to wonder or contemplate what we are seeing here beyond surface fascination, either. At a very brief 93 minutes, “Poltergeist” is so enamored with the immediate nature of its special effects that it refuses to emphasize them on any notable foundation, and the circumstances that bring them to reality are driven by such flimsy setups that we grow weary of the movie’s intentions well before the climactic exchanges. Furthermore, none of the characters (yes, even that sweet little girl) ever emerge from a place of sympathy; they occupy the foreground like stand-ins waiting for cues to something that sounds much more grand than what their superiors have in mind. That would be ok in a movie that accepted those realities for the sake of effectively staged thrills, but the screenplay lacks even that basic motivation. Many of the most important sequences, in fact, are direct replicas from the original, right down to the placement of characters in critical discoveries (the brother’s encounter with a monstrous tree being a decoy to detract from the disappearance of the little girl, for instance) to the dialogue they exchange (fess up: did you honestly doubt that little Maddy wouldn’t utter the famous “They’re here!” line before all hell broke loose in that house?).

The director is Gil Kenan, a newer filmmaker whose knack for imitation is often impeccable, but usually without the context or perspective to back it up. It is clear while watching “Poltergeist” that he is, at least, very much a fan of this series. There are various nods to some of the more quintessential aspects of the earlier picture (and not all of them pointless or tired), and his core initiative for adding realistic intensity to special effects supplies the film with an overreaching sense of realism. The tragedy, alas, is that neither he nor his writer studied much about tone or modulation in preparing for a remake, which undercuts the whole point of what Hopper sought in favor of jolts that have only momentary effect, and not much in the way of ingenuity. At least a reboot of “A Nightmare on Elm Street” was audacious enough to take risks with the material. There is a moment towards the end where a key character makes a sacrifice in order to halt a pattern that has the capability of becoming a vicious cycle. As far as exterior circumstances go, one wonders if the more tragic sacrifice was supplying this material with voices too passive to suggest something a little less derivative.

Horror/Thriller (US); Rated PG-13 for brief language, some violence and many scenes of supernatural peril; Running Time: 93 Minutes