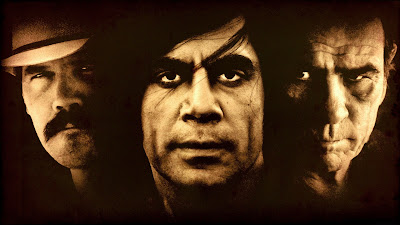 A fair number of modern dramas set in dead rural spaces have dealt with similar themes over the recent years – and a great many of them have inspired hours of important discussion, but the Coen Brothers’ “No Country for Old Men” remains one of the most thoughtful and startling, especially after long stretches of time. Many of its themes seemed stark and forced when the movie found its way to theaters in the latter part of 2007 (at least to me, I guess; it was critically hailed by most at the time, and even won Best Picture the following spring), but through the silent contemplation that comes with age it takes on a life essence that is undeniable. Eight years later it finally emerges in the context that is, perhaps, exactly as its talented author Cormac McCarthy intended: as a seed of truth that generates a sense of influence over the course of continued personal experiences. That is not to say any of us will come to agree with the morose portrait that the story paints, nor does it imply we all must walk within similar shadows. But as an acknowledgment of the human condition, it has the audacity to wonder if violence is inherited through our genetic blueprint, and if some who possess it are capable of understanding anything less than the extremes.

The pinnacle of that realization comes in the form of one man, a loathsome and menacing beast that many regard with quiet horror, as if created in the recesses of nightmares. He is played by Javier Bardem in a role that challenges perception by offering very unflattering graces; ordinarily so suave and fetching as a leading man in his movies, here is an actor who is forced to wear a dark smirk, trod through scenes with ponderous shuffling (not to mention an eccentric hairdo), speak to others in short but foreboding euphemisms and gaze at onlookers as if piercing holes through their souls. Often at his side is an instrument that brings him much comfort: an air tank that is hooked to some sort of piston that resembles the barrel of a pistol, and is used with similar intent (though without the nuisance of bullet casings). That it defies all known mechanics of mainstream artillery is intentional, if just to underscore the nature of its carrier. This is a strange and foreboding shell of a man housing a soul that knows little of anything but the dark extremes.

The scenario: a hunter named Llewelyn (played by Josh Brolin) stumbles upon a grizzly scene in the desert where an entire party of drug dealers have been brutally murdered, and their money – a sum of $2 million – remains unattended at a nearby tree (although its carrier, riddled with bullets, still clutches it with all his dying might). Dumbfounded but allured by the temptation, he snatches the cash and hides it under a trailer occupied by him and his nosey wife Carla Jean (Kelly Macdonald). All matters appear to his benefit in the early hours of his theft, but two critical mistakes have created crosshairs: 1) the briefcase actually contains a tracking device; and 2) he returns to the scene of the crime the same night, where the culprits of the slaughter have discovered him mingling amongst all the dead bodies while their money is missing. A silent chase in the black embrace of the desert ensues, but Llewelyn’s narrow escape may, in fact, be to his detriment. In more sympathetic examples he simply would have been murdered on sight; here, an engine of destruction has been set that will follow him over the course of two taut but tense hours, where each man attempts to outsmart the other without necessarily knowing what to expect. The virtue is that Llewelyn is a rather smart codger who thinks several steps ahead; unfortunately for him, his nemesis is the ominous Anton, who always has a way of ensnaring the challengers in their own elaborate traps.

Meanwhile, legal figures attempt to piece together the context of the crime all while observing the chase from a place of defeated resolve. Their demeanors reflect the inclinations of the movie’s screenplay, which views its most violent moments with shock, then horror, and then ultimately sadness; for them, it becomes not a question about how to end the reign of this unstoppable force, but how to preserve as many lives in the process. When a bounty hunter played by Woody Harrelson manages to make contact with Llewelyn, his rhetoric does not reflect the standard of his profession: “I can’t save you from him unless you hand over the money,” he concedes. What that suggests is singular for all involved: hope is a lost commodity when one resists the tide of tragedy, and any attempts to do so are foolish games stirred from distant childhood fantasies of lost heroism.

The Coen brothers have climbed similar thematic mountains before – namely with their masterful “Fargo,” also about a series of simple people who become involved in an unfortunate crime spree while observant police figures try to piece together the events from a distance. Whereas that film celebrated the small-town protagonists by making them heroes, “No Country for Old Men” finds underlying sympathy with them, because they have been too worn down by the mayhem to comprehend what it all means, or how it can be neutralized. Worse yet, is there any reason for them to hold out any semblance of optimism? By considering these values from a place of relatable benevolence, the Coens give the premise unwavering dramatic intensity, and anchor it all by acquiring performances that are sincere, assured and modulated by the pointedness of their sensibilities.

The film arrives at the very heart of those points, furthermore, without masking them behind pomp or sensation. There is almost no musical score to speak of, for example: only occasional low rumbles that could be mistaken for natural phenomena in the backdrop. Much of the cinematography relies on lengthy still shots, and the edits between scenes are not used in rapid succession during the obligatory ambushes. The utilization of simplicity as a technique is a textbook case of how to effectively evoke minimalism, but “No Country for Old Men” does it because it is in the necessity of the material to do so. Most filmmakers would have ignored that prospect and overwhelmed the portrait in front of us, because the standard of Hollywood insists that all things – serious or otherwise – require the gloss of a complex production. A more glamorized portrayal of this story, I think, would have been far less sincere.

I have seen “No Country for Old Men” a handful of times over the years, and each new viewing plays like the discovery of new insights. There is not a moment in the picture that is not framed without purpose. The dialogue seems to mature over repeated considerations: it is sharp, meaningful, often tragic, and reveals only what is necessary. The mystique of its antagonist, once a nuisance for a viewer who initially saw the movie from more literal sensibilities, reaches beyond the scope of mere characterization. And the few remaining heroes, each driven by instincts that are old and dated, are admirable resisters to inevitable tragedies, and occupy our time with stories that – in some form or another – recall the simple glory days when being a good person meant that we could impart our wisdom to much grander purposes other than mere survival. Like David Cronenberg’s “A History of Violence,” the film is about more than just its cruelty. But it also reaches far deeper and with much more feeling than it lets on, if for no other reason to indicate where we once were, how far we have fallen, and yet how much worse it can get when the beast is given the unchecked freedom to drag us all right into his hurricane of disorder.

Produced by Ethan Coen, Joel Coen, David Diliberto, Robert Graf, Mark Roybal and Scott Rudin; Directed and written by Joel and Ethan Coen; based on the novel by Cormac McCarthy