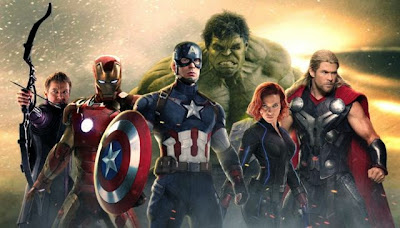 All these ideals would have stuck out like glaring oversights in a movie more sincere with its thought process, but the genre of comic book films has gone long past the point of caring about the psychology of such action. There’s no fun in it. The new “Avengers,” which plays like a kindred combination of five or six superhero films, has only one primary goal in mind for its audience of sound and movement enthusiasts, and that is to deliver two hours of nonstop kinetic action with little regard to fallout or consequence. It is just as well, furthermore, that the movie never makes detours in the wake of destruction in order to view what is left behind; like an engine of anarchy, it tears its way through specific locales, tosses in a few tense plot situations that undermine the safety of the core characters, and then moves on to the next special effect almost as quickly as it leaves another behind. If few of the minor players are among the more compelling of the Marvel Comic line, and it’s just as well; a story this convoluted and loud would be bogged down if genuine personalities dominated it, because inevitably more genuine identities would stop long enough to look at all the damage they’ve caused and reconsider their career choices.

The cast of personalities reads like a textbook prototype for how to write for ensemble blockbusters. Among them: a hot-dog showoff with smart ass tendencies (Iron Man), a quiet nerd with a dark secret (Hulk), an all-around good guy who seems immune to corruptive qualities (Captain America), an all-powerful sort who considers himself far more superior (Thor), a token female counterpart who lets her skill speak for itself (Black Widow), and a ringleader who occasionally reels them all in with witty euphemisms (Nick Fury). Together, they make up the founding members of the legendary Avengers, a group of important national heroes who have united to protect humanity from an onslaught of dangers that threaten the existence of their world, often with increasing severity. That Joss Whedon (the same man who wrote “Firefly”) spearheads this gathering of identities is apropos to his skillset, I suppose; already well-versed in the concept of juggling all the speaking parts, his approach is indicative of a man who sees each specific person as a piece of a cohesive team, and honors their presence with a focus that keeps them all (at one point or another) visible in an alert foreground.

Not so divine (or deep, furthermore) are his long-winded treks through plot formula. The central conflict of “Avengers: Age of Ultron” deals with the discovery of an alien intelligence inside a scepter, which is acquired in an opening sequence in which the Avengers infiltrate a base where it is being held for destructive means. When Stark (played by Robert Downey Jr.) has it analyzed in his lab, he sees it as a blueprint to jumpstart his “Ultron” program: that is, a directive in which he can download an artificial intelligence into sentry drones and effectively create an army of peace-keeping soldiers. What he doesn’t count on (or his ambivalent team members, for that matter) is discovering that this new intelligence is not peaceful at all, but rather very hostile and dangerous. Once it is set free, it manifests in the form of a robotic being who plots to overthrow the Avengers as the first step in cleansing the world of what he perceives as the inferior race: a humanity that has not evolved in thousands of years, which continues to violate the sensibilities of his own Darwinian delusions that machines will replace them as the dominant force of the next lifetime.

Meanwhile, this “Ultron” force acquires the support of two new figures who lurk in the shadows: Quicksilver (Aaron Taylor-Johnson) and the Scarlet Witch (Elizabeth Olsen), siblings who are genetic mutations that have their own personal grudge against Tony Stark, and support their new leader’s initiative to dismantle the Avengers. Their mutant powers are of notable significance, especially contrasted with their counterparts; Quicksilver can move as fast as lightning, while the Scarlet Witch can manipulate the minds of others so that they hallucinate fearful visions. As oppositions to the elaborate ensemble of Avengers, they hold their own with relatively pointed focus, and the movie’s dialogue exchanges reveal crucial aspects of their past as a means to fuel their conflict with the heroes. All while this is occurring, furthermore, Ultron himself attempts to download his own consciousness into a more organic body, ultimately leading to the creation of another key character so highly coveted by comic book buffs that his presence is almost exotic. The beauty of this undertaking furthermore, is that the movie still finds plenty for him to do; even among a cast that includes domineering sorts like the Thor and Hulk, Whedon’s screenplay is sure to offer some valuable time to outlying players, and not for the sake of just fitting all the pieces in either.

What all of these facets amount to, needless to say, is not really all that different from than anything that already happened in the first “Avengers” film; it’s just that it occurs now in more abundance, and often with much sharper pitch. The special effects are so elaborate, in fact, that we can almost sense the debt of the movie studio; they are long-winded, rapid and nearly abusive on the eyes, especially as the movie draws towards a very implausible climax. Sometimes that amounts to moments of spectacular wonder, but only when we can actually tell what’s going on; in some of the more tense moments, the camera seems so confused about essential angles that it cuts between shots with schizophrenic rapidness, and misses details that would otherwise enhance the sensation. If we are contend with the prospect that even film cannot always bring clarity to the most robust moments of a chase or fight, then the movie certainly indulges in that sensibility. But what would be the problem in slowing down, even in a film like this? Aren’t there more thoughtful possibilities in thwarting the ambitions of a terrible antagonist through strategy and skill that depends just as much on the mind as it does the muscle? “Age of Ultron” is often so enamored by its own sense of adrenaline that it forgets to think about essential perspectives, often relegating many of its biggest action scenes into senseless displays of confusion and deafening noise.

All things considered, however, none of this is patronizing. As a straight action film, much of what we see is given a remarkable technical detail that enlivens the basic senses for a good duration, and when the dialogue punctuates the elaborate chases with witty parley, some of it is delivered with a gusto that warrants repeated smiles. I have never been the biggest fan of the “Avengers” series – in writing or on film – because ensembles of superheroes are the trickiest of gimmicks, especially when several of them are programmed to be effective as stand-alones. Characters like Thor, Captain American and Iron Man are just more interesting in isolated narratives that take their time to delve into their psyches; together, they are caught in that ever-so-formulaic paradigm in which male egos attempt to upstage one another, and the plot gets caught in a situation of biting off way more than it can chew. “Avengers: Age of Ultron” teeters dangerously close on that line for most of its loud and desensitizing running time, but it has color, great delivery, amusing interludes, a cohesive story, and a payoff that doesn’t betray the sensibilities of its direction. So much more could be done with an idea like this, but hey, there’s also something to be said for a blockbuster that has the enthusiasm to consistently beat you over the head and keep you wanting more after the end credits have rolled, I suppose.