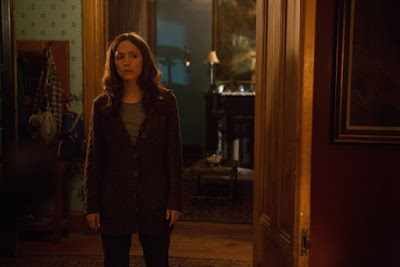 Renai Lambert is not exactly fond of her family’s new home. An old construct of drafty corridors and rickety staircases, it groans with each puttering footstep, and echoes with haunting reverb as the noises of her young children carry over a nearby baby monitor. Eventually, she begins to sense presences walking among the shadows – of what, she is unsure, but with the passing days they drift closer, sometimes close enough to make eye contact. Then, in a moment that seems to transpire without correlation, her young son Dalton slips into a coma following a fall in the attic. But doctors are stumped by the predicament; there is no brain damage, and no hint of direct trauma. What caused him to drift out of this world and into one of eternal slumber? Over the course of three long months of searching for answers, they become obvious in rapid fashion; the strange apparitions drift dangerously closer, threaten the safety of their prey all while wreaking physical havoc on their quaint little abode. Most movies about ghosts wandering the halls of old houses demand that such business be investigated and resolved at the source of the house, but James Wan’s “Insidious,” a rather effective little horror film, may be the first in which the screenplay asks its victims to move away halfway into the conflict.

Alas, if it were as easy as that, some stories would defy cinematic purpose. Hauntings in most ghost stories are not necessarily bound to specific domiciles, but one of the more acceptable facets is that characters can at least gain a reprieve, however temporarily, by drifting off into locations beyond that sphere of terror. But the entities that persist against the Lambert family are of an inventive breed: they are creatures from an alternate dimension, and are not so much linked to locations as they are imprinted on the souls of specific people. The moment that young Dalton slips deeply into a coma serves as the point in which their ravenous nature latched onto his body, and wherever he goes – and no matter how much longer he will endure his paralyzing slumber – they will follow in earnest, eager to taste the forbidden life essence that flows abundantly around him. Like the unseen forces in “Poltergeist,” death is not nearly as exciting or attractive without the promise of some Earthly salvation.

Many unfamiliar with “Insidious” might find these plot descriptions too invasive for a review, but those are the sorts who lull themselves into the comfort of impossible originality. This is not a movie overflowing with novel impulses or even basic self-awareness; it essentially retells the underlying themes of a handful of well-established haunted house yarns without much in the way of an inventive spin. But it is, all the same, an entertaining film, brought to a crescendo of excitement because of how well the director stages his material, and how he modulates between the moodiness of the atmosphere and the jolts of the plot twists without losing our interest along the way. Often in the climate of new horror films, the endeavors of ambitious filmmakers cut through the tension for the sake of supplying only gratuitous thrills; here, we are not victims to unending blood and gore, but witnesses to something a little more thoughtful: namely, a tale of intriguing situations that rise to the surface carefully and cautiously before they explode in a flashy series of stimulating resolutions.

The film stars Rose Byrne and Patrick Wilson as Renai and Josh Lambert, a handsome young couple with ironclad values who have become excited homeowners in the early scenes of the picture. Together with their three rowdy children – two young boys and a screaming infant girl – they begin settling into the comforts of middle-class living when a series of strange events begin to place doubt in their security. The mother (the movie’s obligatory voice of reason) hears strange noises and spies silhouettes of figures in her peripheral vision. The husband (the token cynic) attempts to ease her initial tribulations all while quietly suspecting something of his own. And when their oldest son, the good-natured Dalton (Ty Simpkins), goes to inspect some of the same strange noises he hears above his room, he falls from a ladder and jumpstarts a series of unfortunate circumstances that will, inevitably, lead he and his family down a path where battle must be done with a series of vengeful spirits.

Those beings, a cluster of souls who gather in a distant realm known as “The Further,” have come to the home of the Lamberts because their son has inadvertently made contact with them through “astral projection,” a reality in which the child’s dream essence travels out of body and into worlds beyond its own. The movie explains this (among many other pieces of its equation) through dialogue that is most reminiscent of “Poltergeist,” another supernatural thriller in which the dead attempt to unravel a family through the soul of a youthful optimist. The short of it: Dalton’s nightly travels have taken him far past the point of return, and as he is being held captive in the Further, damned souls of the deceased are closing in on his body in hopes of harvesting it for themselves. At the head of the pack, of course, is one far more sinister and threatening than all others, a dark angular figure with a face resembling fire that may come to do far more damage if he winds up taking possession of Dalton’s body before all others.

Wan’s strategy with this basic formula is not to snatch the glory of past pictures molded in the same image, but rather to forge a destiny of mood, style and deliberate orchestration in order to give his viewers a payoff worthy of their time. For him, that starts with an impeccable production design; from the evocative opening credits to the inventive climax within the alternate dimension, his visual flair is gifted with distinctive panache, assembled out of ideas generally reserved for more reputable genres (the visualization of the Further contains images that one might expect to see in the dressing rooms of a circus). His actors, meanwhile, play the material straight without hamming it up nonsensically. The biggest asset of that is not necessarily the leads, either; the talented Lin Shaye (playing the obligatory psychic consult) does a great job of modulating between ambitious confrontation and fearful acknowledgment, and Barbara Hershey, who plays Josh’s secretive mother, has some great scenes involving a few critical revelations in the final act. Together they assume the mantle of an ambitious mystery, and bring the audience along for a ride that is as enjoyable as it is strange and incomprehensible.

On the other hand, the screenplay is weakened by a noticeable lack of focus in the outlying details. There is, for instance, rarely any interaction between the mother and father that feels organic to the individual situations; it’s as if he exists to be a constant naysayer for the sake of relationship strife, and she a hyperactive bundle of nerves to speed up the tension. Furthermore, neither of them is given very much screen time to be a couple; she is usually seated at her piano writing songs while listening to ominous voices on the baby monitor, and he is often away at work grading papers for his students, usually to avoid possible confrontations. More than just the sense of a family unit gets sacrificed by this reality, too; at the halfway mark, both of the youngest children literally do a complete disappearing act from the setting, and that begs one to wonder: why did the story bother having them there at all? In the age of less investigative plots, however, it’s a wonder that such things are the only quibbles that were sacrificed. “Insidious” may not be in the class of its great predecessors, but it does hold its own in a nice package of effective thrills and stimulating imagery. And for anyone to accomplish that much long after the horror film has become a conduit for unending mayhem, that’s just as remarkable as it is refreshing.