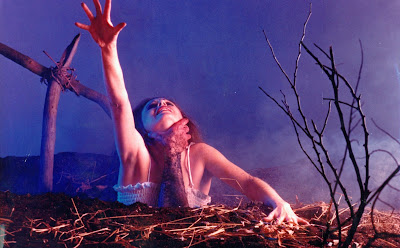 A good horror film is not necessarily dependent on a marriage of specific qualities, but can be simply so because the enthusiasm of its creators fill the screen with almost perverse allure. “The Evil Dead,” one of the most celebrated of the classic canon, falls distinctly into the latter category. When it was first unleashed onto unsuspecting audiences well over 30 years ago, few could regard it with serious conviction; it was one of the first films of its respective genre to earn the dreaded “X” rating, and the consensus was – even among those who were completely sold on the content – that it was one of the more visually reprehensible exercises of its time. Yet it endured across the gulf of evolving artistic standards, eventually gaining prestige among a slew of genre fanboys that elevated it to cult-like importance in the subsequent years. Their reasoning: within its macabre and grotesque images are the foundations for some of the most spirited personalities of the horror pantheon, two of whom would not only go on to work together on equally popular sequels but would also lead rather fastidious careers in the Hollywood limelight. To them, the movie plays like an entry point into the infectious minds of their favorite overachievers, who did exactly what they wanted and offered no apologies.

Such prospects are all that one can use to accurately describe the relic that remains on screen, a movie shot in the Tennessee wilderness over several weeks in 1981 that spent nearly two years in limbo as it was going through extensive post-production reshoots while being shopped around to nervous distributors. The nature of troubled productions seldom translate to lucrative opportunities for final results, and by all facets “The Evil Dead” proved to be of no exception to that rule; it came and went in a flurry of controversy, and then disappeared with a meek box office take when it finally found the theater. The critics, however, went against their trend of easy dismissals of genre pieces, and cited it with almost shocking respect. Big names like Stephen King offered added endorsements, and assisted in building a momentum that would fuel revivals and prolonged interest. I was not part of the film’s loyal establishment in many respects until fairly recently, but seeing it now – and well after the shoddy remake had already polluted my memory – was an edifying experience. The movie is gross, bloody, moody, and certainly short on exposition… but it lives and breathes its details with such sincerity that we can’t help but be entranced by its gratuitous splendor, even while acknowledging the over-the-top absurdity of the story.

It is a simple one in most respects. Five teenagers – three women, two men – have decided to go camping at a rickety old cabin somewhere deep in the woods, and wander so far off the beaten path that they fall into the lap of a diabolical force. In the nearby woods, evil energy appears to stalk them; their forms are never physically seen, and perhaps that is intentional, because the macabre chords of the soundtrack suggest more than ghostly apparitions. Their presence seems to come to greater light when the teenagers arrive at their destination and are surprised to find a foreboding basement beneath their feet, which houses its own menacing energy. At the back of it are strange (almost demonic) artifacts, and a book with a cover made entirely of sewn flesh. The virtue, at least, is that some prior tenant was perceptive enough to document his findings about the book on a nearby tape recorder (the book isn’t written in English, mind you); the bad news is that when the teenagers get curious and fast-forward the tapes, they hear menacing incantations that act as a gateway for the evil around them to emerge full-force, where they possess each person in the house and devour them through mental destruction or physical mutilation.

That is all that must be said of the film’s plot, because “The Evil Dead” is more or less about the effect it must have on its viewers, many of whom tend to fall in the age range of violence-hungry adolescents. Several were accustomed to the diabolical impulses of Michael Meyers and Jason Vorhees when this picture finally made landing, but director Sam Raimi was cognizant of his reality right from the get-go; he knew that he had to be at the seat of something a bit more visceral than that. Audiences were initially so rattled by the experience that it created public outcry; the blood was considered too extreme, the sense of evil too forbidden. But it also played against every standard of the low budget realm of horror films: it was well made and did not sacrifice the integrity (or the morality) of its motivated authors. As far as the formula goes, Rami even skipped past some of the essential points of a slasher premise (why bother getting to know anyone if they’re all going to convert to bloodthirsty demons, after all?), because he saw no point of a routine. Rare is it for a movie of any style to be aware of its own standards, and cheerfully throw them out the window.

Just as the director is responsible for much of the enthusiasm on display here, so is his greatest frontal asset, Bruce Campbell. Legions of avid followers would gladly regale us with lengthy discussions on how his character, the stubborn Ash Williams, embodies all of the qualities of great horror movie survivors while reinventing them in his own bad-ass style, but I think the allure runs a little deeper than that. A fan of this genre is more inclined to appreciate a mind (however simple) if it has the gumption to face the source of terror without surrendering to it, and Ash’s strength is that he survives out of stubborn protest. The initial fear of facing a slew of crazy demons in the skins of his close friends would eventually be replaced by resentment and annoyance in the series’ two later films, but there is a purity to him in “The Evil Dead” that isn’t so obligatory to this sort of premise. Others reach the end of their rope after watching everyone around them die tragically because it is all the have left; towards the climax of this picture, one gathers that he keeps pushing on because that’s how the cards fell, and he isn’t taking his luck for granted.

The movie may be more than three decades old, but it still carries the spirit of a very grotesque visual artist. The possession sequences, which are numerous, are blatantly over-the-top; there is never any element of the imagery left to the imagination, and the methods of which these characters are brutalized, tortured and eventually done away with are increasingly elaborate. The way that the camera suggests the presence of evil in the early half is also effective; always we view them from the perspective of an inquisitive camera lens, and that is accompanied by harsh soundtrack chords that add to their intensity. Fans will be happy to point out the casting discrepancies that litter the latter half (many of the initial actors had to leave before final reshoots), but they are part of the charm; it’s like the movie is caught in ecstasy over its devious tongue-in-cheek mentality, and our shock is intercut with groans of lighthearted amusement.

The trait that I am drawn to most, however, is the film’s overall sense of tone. So many vicious and deplorable things happen to everyone involved in this chaos of a plot, but we do not match their vigor with sadness or loathing. Those were two qualities I felt while watching the remake, a movie that had no sense of humor, no spirit and no perspective. Why aren’t such drawbacks found here? I think it’s because Raimi has the cognizance to know the intelligence of his audience in those days, and he was inclined to let them draw their own responses rather than manipulating them into one. From the underlying standpoint, there is more going on in “The Evil Dead” than its visuals indicate. And that, I suspect, is one of the key components that have allowed it (and its successful sequels) to persist so fervently with modern audiences. How refreshing it is to be reminded, especially now, that a very violent horror film doesn’t always have to be a cynical one as well.