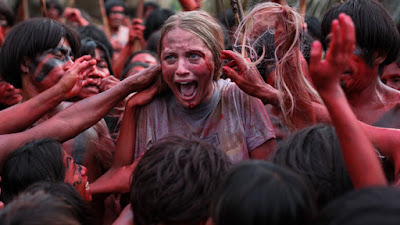 A great many films of questionable motives went on to inspire the career of Eli Roth, but one that raises more questions than others is Ruggero Deodato’s “Cannibal Holocaust.” Often branded the most depraved horror movie of its time, it was the pinnacle of cynicism in its respective genre, a breakpoint in the cultural zeitgeist that heralded a level of gratuity that went far beyond the standards of any existing filmmaker. Up to that point, audiences could at least depend on an underlying fantasy of primitive special effects and coarse production standards to undermine the authenticity of what they were seeing. People going to those movies had fun because they knew what they were witnessing was an act of elaborate artifice. But the arrival of a sub-genre of cannibal-oriented scarefests – usually in the hands of very motivated international artists – robbed them of their one level of security, often shocking observers to the point of mental exhaustion. Deodato’s own picture remains the most notorious of that standard because it went far deeper than any other endeavor of its kind; in many cases, what you were seeing on screen was more than just a mere act for the camera.

While the removal of such barriers between the audience and the director have become commonplace in a modern expectation of endless blood and torture on the movie screen, Roth has molded himself in the image of more elaborate showmen. His “Cabin Fever” from 2002 remains as shocking today as it was during first-run release, and the first of his “Hostel” pictures still carries the ability to leave us feeling raw and helpless. But what in the world inspired him to reignite the fire of cannibal horror films that had been rightfully smoldered so many years prior? What did he think he could extract from this concept, other than more of the same primitive ideas that all those other directors had about the nature of tribes in the uncivilized world? His desire to emulate the elders of this standard might be seen by some as an act of mere homage, but his apparent fanaticism far exceeds the possibilities of his undertaking. Many good movies – even graphic ones – can be made from premises that call into question individual morality. A movie about cannibals is just not one of them, especially in the age where we have put greater distance between unrelenting violence and vague cultural contexts.

The result is “The Green Inferno” a well-made exercise of impeccable production values that doesn’t so much expose us to terror as it requires us to partake in the morbid curiosity of great human suffering, often in a frame of reference too diminutive to overpower the austerity of the visuals. That does not violate Roth’s principals directly, but it does inspire broader deliberations. Why do we even need this? What purpose is there beyond the desire to pay tribute to a series of old cannibal vehicles that were already shocking enough on their own? A generalized defense might insist that an experience like this in current times is exactly what blood-thirsty moviegoers crave, especially since they have been far removed from the origins of such ideas. In that respect, I suspect the material accomplishes exactly what it sets out to do. But it’s not scary or penetrating on any psychological level either, because no one involved is concerned with anything other than barbaric instincts, horrific screaming, severed limbs and repulsive motives. It would be one thing to walk out of the theater feeling jolted by the endurance test of the last two hours, but all I felt was sadness and exhaustion.

The story deals with a group of activist college students, who engage in routine protests on campus and recruit others to join them on crusades to spread the word of deplorable political conditions. Their newest endeavor involves circumventing a plan to bulldoze a local rainforest in the heart of Peru, which would also lead to the slaughter of an ancient tribe of natives living in close proximity; this is seen as such a tragic implication that the group’s leader, the smarmy Alejandro (Ariel Levy), sees no other solution besides travelling to the region, launching an attack on the culprits and then filming them on cellphones as they attempt to counteract their offense with widespread violence. They are, in essence, young political terrorists, but a movie of this nature (and in this era) doesn’t bother with such underlying arguments; the point is that their audacity must garner viral reaction across social media, otherwise their guerilla-style endeavors are all part of an act of wasted vanity.

The center of this reality is a character named Justine (Lorenza Izzo), a college freshman who comes to one of their rallies out of a desire to become more involved in international politics. Eager to prove her allegiance to important causes, she joins on the mission to Peru, but quickly discovers that her presence carries deeper agendas for the more seasoned participants. Alejandro and his band of youthful activists use her position as the daughter of a United Nations lawyer to increase media acknowledgment of their cause – an act that does little to garner her enthusiasm when she discovers this in the middle of an ambush. She is barely given a chance to react to their underhanded agendas, however, because the rickety plane that carries them back to civilization begins failing mid-flight, and that in turn leads to an elaborate crash sequence in the nearby jungle… and right into the lap of the same tribe of natives that they hoped to preserve.

What is to fear of the natives, though? An awful lot, it turns out: they are avid cannibals, and believe that their newfound apprehensions are part of the same group of invaders who are currently flattening the nearby forests. Something about that implication must fuel them dramatically beyond the mere acknowledgment of feasting on fresh meat; when they decide to slaughter their first victim in full view for the camera, it is done with such zealous vigor that the victim is barely given the chance to die of outright shock. This greatly horrifies the remaining survivors of the crash – all of whom are kept pinned in a cage nearby – and results in a series of typical internal stand-offs and escape plots that will ultimately lead to the demise of nearly all parties involved, save for one who must endure through the end in order to ensure continuity for a sequel.

The selling point for anyone eager to see the movie is the violence, and “The Green Inferno” does, indeed, contain some of the most graphic I have ever seen. Among the many sadistic deeds that are undertaken in the heart of this horrific cannibal village, there is suicide, skinning, dismemberment, gouging of eyes using a jaguar tooth, female circumcision, the slicing of tongues, and even the feeding of a live host to a swarm of flesh-eating ants. These are the selling point for Roth, film’s crowning emperor of excess, whose continued indulgence of such violence indicates that he has one of the strongest stomachs of any director of his generation. But does he really think that it’s all scary beyond the hardcore shock value? Even his greatest teacher, Quentin Tarantino, learned early on how to modulate such values in a frame that contained perceptive dialogue or inspired plot twists. The characters who occupy space here are fairly well developed in the setup scenes (and have some good outlying interactions), but when the moment of slaughter comes, the movie no longer cares to do anything more with them or their specific situations. A more dedicated story might require the survivors to work together and think creatively for the sake of overthrowing their captors; here is one that contains scenes of nonsensical filler, such as one in which a woman’s stomach pains result in explosive diarrhea, and another where the ringleader of the survivors opts to seek “stress relief” by masturbating in front of his peers.

The irony here is that all of it is staged with a certain level of skill and dedication. The cinematography is focused and perceptive (the action is not jumbled by shaky nonsense), and Roth brings in actors who certainly embody the scope of legitimate college students; they aren’t stupid or lazy, and one gathers they would have been able to hold their own in any traditional movie nightmare. Furthermore, Roth’s inclination to use an actual native tribe in South America to play the roles of the cannibals is ingenious; by not imploring the use of stand-ins, he has assisted in establishing an atmosphere here that looks and feels as authentic as most serious horror films need to be. But he doesn’t use these traits to any profound psychological purpose; they are facets in an elaborate geek show, invented to cause blatant discomfort and wincing. His followers, I suspect, won’t dare question those motives; they are seasoned experts in all things disturbing. Will they like “The Green Inferno?” There is no doubt that it continues the trend of its director, who finds pleasure in making his audience feel as if they are convulsing. In that regard, the movie does the job very well. For me, it’s all is just an indication of how far out of touch horror films have become from their more simplistic origins, when everything was about thrills instead of misery.