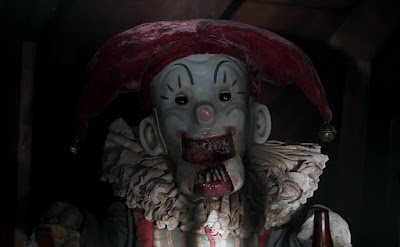 “Krampus” begins with a potent shot of irony, in a slow-motion sequence where cheerful holiday music plays over the questionable antics of angry retail shoppers stampeding through a sale. Their faces divulge the intoxicating dangers of commercialism, and the employees exhibit fear and injury with almost comical severity. To the director, this is what Christmas time has become – a display of extreme contradictions, in which the implication that good tidings must come in the form of expensive material possessions has changed our outlook to one of abundant pessimism. You wouldn’t ordinarily suspect that kind of forethought to worm its way through any sort of holiday movie in this day and age, but it is there, I am sure, to underline his more sensational motives. The characters in this movie are ready to drop the formalities of tradition and come out swinging against one another – even in the context of Christmas get-togethers – but a listening ear from beyond has picked up on that frequency, and is ready to unleash an arsenal of its own horrifying doing. Nothing is worse during the holidays then one’s loss of hope, because it brings out the shadows of devious energies ready to unravel all that we take for granted.

The idea is the brainchild of one Michael Dougherty, a filmmaker who, with his rather effective “Trick R Treat,” has already established himself as a voice of austerity when it comes to the conflicting realities of human traditions. What he did for Halloween he has now done for Christmas, and gives us a movie that, like its near cousin, descends into the wilderness of visual and dark comedic excess in order to deliver its players to a moral that, somehow, manages to be universal and thoughtful. The methods at which he goes to make the point will be at odds with what any filmgoer will anticipate when going to a movie about the good old holidays, but that’s precisely what makes it so distinctive. If we charge motion pictures with the responsibility to get to the core of the issue when it comes to problematic routines in the day-to-day grind, one cannot be at all surprised – or disheartened – to find the message delivered in new and inventive ways, even if it means going to the brink of a dark place in order to discover the meaning.

Here is a very good little film that does exactly that, and does it with an exciting blend of characterization, legend, sharp visual effects, tension and humor, all in a span of a mere 98 minutes. The film tells the story of one particular family that mirrors the moral decline of a common populace, a gathering of relatives who regard their union not with cheery dispositions or goodwill, but with outright anxiety. They are caught in a slump of disinterest, put off by the taxing preparation that goes into the holiday and jaded by the reality that each of them will have to engage in pleasant formalities in order to prevent dangerous arguments from rising to the surface. On one side of the family, there is Tom (Adam Scott) and Sarah (Toni Collette), a married couple living comfortably in the upper class; their two kids are pleasant but morose sorts, with young Max (Emjay Anthony), a young believer of Santa Clause, teetering dangerously on the edge of losing his faith. Their house becomes the hosting ground for Sarah’s sister Linda (Allison Tolman) and her own middle class family, which includes husband Howard (David Koechner), a gun-toting Republican who dresses their three children (one boy and two girls) in gear that would look more appropriate on a hunting trip.

There are heated discussions aplenty that occur amongst them as they slowly come together. When Linda brings troublesome and outspoken Aunt Dorothy (Conchata Ferrell) along for the festivities without consulting Sarah, it develops into added tension between various members of the household; she is always critical and never pleasant. The husbands argue over the quality of the dinner, and engage in circular discussions about each other’s stubborn political ideologies. And when Linda and Howard’s two bullying daughters publicly read aloud Max’s letter to Santa at the dinner table in hopes of embarrassing him, it inspires key revelations that fuel the young boy to a twist of equal importance: he runs to his room, tears up the letter and tosses it out the window, where the wintry winds send it into a sky that seems to bubble with supernatural energies. Of the ensemble of busy chatters, only an old German grandmother (Krista Stadler) seems to be in tune with the impending reality: the next several days leading to December 25th are about to get very deadly, especially when the power goes out and leaves the family disconnected from all links to civilization.

What this one act of defiance does is awaken the legendary figure of Krampus, a Christmas demon that stalks and consumes souls in a wide array of very creepy and disturbing methods. Over the course of the film, members of the family are gradually attacked and abducted by many of his unseen forces – some burrowed under the snow, others hidden within childhood toys. The film is clever to offer gradual glances at the villainous figures, and with very good reason; some of them turn out to be so horrifically absurd that they would inspire nightmares in Tim Burton. Two that I personally found notable include a vicious clown whose mouth full of rows of teeth opens like that of the Predator’s, and a trio of homicidal gingerbread men who use a nail gun to attack family members. No laughs are to be had at the sight of that utterly grotesque clown, but the gingerbread are, admittedly, rather silly commodities. But utilizing both, Dougherty reminds us that his intentions are twofold: he is not interested in making a straight horror film, nor is he concerned with the formalities of mere satire. There is an overlapping frame of reference in his conviction that give his endeavor a bizarre quality, like watching a group of friends commit severe injury on one another while learning to  laugh about it all.

Many will perhaps find the tone unsettling and imbalanced for the nature of this premise, but “Krampus” is much smarter than it lets on. This is not a cheap and meaningless exercise set to the tune of unrelenting melancholy, nor is it an exploit of graphic intentions; even when the images are at their most sadistic, there is a certain chord of restraint to them, as if being modulated by the hands of a professional that wants only to use them long enough to remind us of the thesis. In most respects, the screenplay by Dougherty and Zach Shields shares some distinct commonalities with “A Christmas Carol,” which too used the looming threat of gothic sensibilities to set its main character on a path of quick redemption. What was true to the resonating power of that famous yarn is, I’m sure, the same in the case of this story: in the thick of impenetrable gloom, sometimes there is only one method to return certain individuals to a place of gratitude, and that includes exposing them to something as frightening as it is dangerous.

The movie drips with excitement. It looks good, moves rapidly, and keeps us eager for the next twist. A scene in an attic, in which the grown-ups chase a clown ingesting children, is thrilling in its gruesome nature. Another sequence that occurs in the snow, in which one of the daughters is chased by the menacing figure of Krampus as he leaps from one roof to another, is great at developing stern narrative implications. And the finale, where the experiences of this family are brought to a head in one key moment where they are required to exchange knowing glances, is brilliant in how it silently ties the material together without losing sight of the last morsel of optimism. It is true that Dougherty’s direction is not without its limits – why does the climax have to be so rushed and incoherent, for example? – but his desires are stirred from something deeper than most filmmakers have been willing to consider over time. “Krampus” is everything that a holiday fable should be: brooding, cautious, dark, humorous and thoughtful. And it is also anchored by a point that goes to the trouble of reminding us of our individual values, especially in a time when the season’s radical shifts can so easily deplete our enthusiasm and leave us in a state of indignation.

The movie went from a dark cautionary tail to a strict nightmarish warning with the last scene to me.

I saw no optimism, I saw a family stuck in the Christmas they should of been celebrating but didn't.

The grandmother said the krumpus only punishes and takes, he does not give. So after fulfilling the boys wish to be done with his family, he can't just give them back when he takes his wish back. He sends the boy to hell with them. (no I don't think they survived)

That last scene with all those families that had been drug to hell forced to play out the perfect Christmases they should of had, in side those snow globs, was quite chilling

Very good even though I found the ending to dark for my taste :)