Lo and Behold, Reveries of the Connected World (2016) 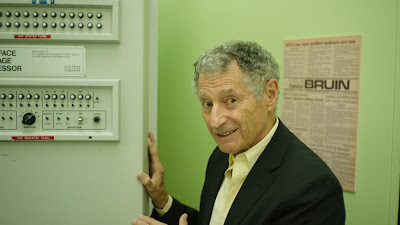 A statement comes late in Werner Herzog’s “Lo and Behold, Reveries of the Connected World” that frames the predicament of the times: “The system was designed for people who trust each other.” Those words are spoken by one of the key architects of what we now know as the Internet, a series of connections that began life in the halls of UCLA in the late 60s, back when servers were the size of coffins and the idea of sending immediate messages to great distances was an absurdity out pulp science fiction. But those dreams fueled the engines of a handful of great thinkers in those formative years, leading to an audacious task that culminated on October 19, 1969, when the first word was sent across hundreds of miles of electronic transmission: “Lo” (though it was supposed to be “log”; the system crashed before the final letter came across). The mantra “Lo and Behold” can certainly be used to describe a plethora of technological breakthroughs (and indeed has), but in those days the revolution belonged to only a fragment of people: those who had faith, conviction and loyalty to the movement, decidedly opposite of the perspective of today’s world. What is a mere person living in the here and now supposed to feel when he hears about these details, long after the origins of cyberspace have been blurred and the net is seemingly in control of vitriolic bullies who are capable of inflicting great harm with words and actions?

To them, Herzog’s intriguing chronicle of the proverbial dichotomy of the Internet might be the stuff of dreary intrigue, lacking the conclusive appeal of a handful of his greatest treks in the documentary world. On the other hand, maybe his epiphanies – some intellectual, others morose – will vibrate with some level of self-reflection, particularly when it comes to acknowledging the roles we play in allowing the cyber world to sweep over us and expose our weakened behavior patterns. That is not to say his film is a damning critique of the technology, but for all its virtues a pivotal question remains consistent with the probe: why are we so apt to abuse such a tremendous privilege, often unconsciously? The answers are attached in the experiences of a handful of the movie’s primary subjects, whose narratives range from the strange to the sad to the downright tragic.

One of the more surprising things involves an investigation on biological ramifications. There is a segment during the middle in which Herzog, ever-so-fascinated by the victims of a revolution, discovers a cluster of individuals who live entirely off the grid – not because they prefer disconnect, but because radiation waves make it impossible for them to function otherwise. One of them, certain she was once near death after years of devastating illness, discovered she could only escape paralyzing symptoms by isolating herself in a metal box, where the waves would not penetrate the walls; another, accompanied by caring relatives and friends, tearfully recounts how her livability declined rapidly when cellphone and internet towers went up around her neighborhood. Some level of forethought fuels their words towards the camera (they never want to come off as victims), but they are the silver lining case studies; this is a movie where we also hear from a family whose deceased daughter gained infamy when pictures of her decapitated body in a car accident went viral in chain emails. “I believe the internet is evil personified,” her mother sternly warns. Given the experience, can anyone really challenge her perception, as detached from scientific logic as it may be?

Their stories, a fragment of what goes on in the here and now of the connected populaces, are not at all damning critiques of the system; on the contrary, this is a film that is in wonder of it all, even when it is used to fuel the hatred of the hidden. Equally perplexing is how the same space that is used to exploit human tragedies can also be used to advance the causes of greater experiments – including a pivotal medical development involving molecules, which allows online volunteers to dissect and restructure them to advance their creator’s own research. One the other hand, big questions rise when the same sort of benefits are viewed in relation to the invention of autonomous vehicles, which are operated and driven entirely by a network that anticipates traffic flows and city maps while those within can go about unconscious routines. If those inventions get involved in accidents with others, who is liable for the damage: the passenger of the vehicle, or the company that manufactured them?

Many have more than asked those sorts of questions already, much in the same way religious champions have argued the moral ramifications of stem cell research and cloning. But no one, not even skilled professionals, asks these things with the same distinctive slant as Werner Herzog. His is a movie of intriguing case studies that are magnified by unconventional curiosity; if cyberspace’s immense possibilities come with dissonant consequences, are they worth having at all? When he is unable to arrive at the answer, he doesn’t fill the screen with nonsense or dodgy details – instead there are intriguing episodes spent with an ensemble of colorful characters who have their own stake in the invention, ranging from former creators (Ted Nelson, who helped shape the code, believes it is not being used right) to users who now suffer from destructive addictions. And then there is an ominous final passage warning against our dependency on the medium, especially when catastrophic solar events (such as one in the mid-19th century) can literally obliterate all the satellites and cause a worldwide system crash. For every empire that flourishes lavishly, Herzog believes chaos will force their elaborate decay.

Eventually those theories – eccentric, horrific, melancholy, stimulating or mind-boggling – must take the director into the same sense of wonder that inspired the great science fiction writers of the last century, all of whom eventually came to ask whether it was possible for an artificial consciousness to absorb such a complex system of electronic processes. Is artificial intelligence possible in the internet, now that it has so seamlessly affected the lives of millions and continues to grow from their relentless contributions? Every thought we share is like an expansion of its virtual cranium. Mainstream film has grappled repeatedly with this notion (often with absurdity, as is the case with “Johnny Mnemonic” or the more recent “Transcendence”), but none are yet comfortable with reaching the pivot of the possibility. “Lo and Behold, Reveries of the Connected World” is not nearly as committed to an answer as its title suggests, but when the connections themselves act like an intellectual tug of war amongst its most loyal users, one must wonder if some of our contributions are only diminishing the collective intellectualism.