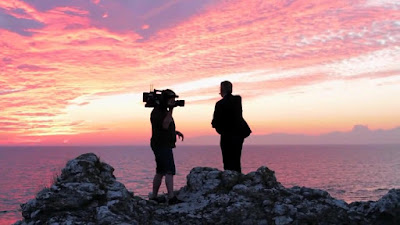 In the turbulent waves off the coast of Sweden rests the small island of Fårö, a patch of land that has been the source of constant discussions amongst film buffs and connoisseurs of cinema. On its shores is, we soon discover, the house that Ingmar Bergman called home during the last decades of his life, though few knew where it stood; until his death, its whereabouts remained the closely guarded secret of nearby locals, who feared their most treasured (and secretive) icon would have his privacy undermined by opportunists eager to exploit it. But now the secret has emerged, and film directors far and wide have an awakened interest to wander into the private rooms of his compound, no doubt to gain a sense of his profound essence. Was his vehement privacy as fascinating as his immense body of work, or is there a far more profound undercurrent driving these men and women towards the doorstep of their secretive teacher? When the great Alejandro González Iñárritu wanders into a meeting room and is nearly driven to tears by the power of the moment, it serves to anchor the sentiment of his defining thought: “If cinema were a religion, this would be Mecca, or the Vatican.”

Bergman died in 2007 after an extensive seclusion, but the filmography that preceded him – often perplexing and stubbornly lingering – remains a constant source of study across generational and cultural boundaries: a proverbial Shakespearean catalogue of the modern arts. To some they play like chapters in the evolution of a thinker’s strangely emotional journey; to others, the marks of a poet who discovered the power of moving pictures beyond linear narratives and conventional character development. But somewhere in those personifications was a man that also barely fathomed his talent, usually to the point of personal alienation (and sometimes self-destruction). Other filmmakers have discussed those demons with forlorn conviction, perhaps, because they identify with them; when Michael Haneke regards the deafening power of his later pictures in one scene of “Trespassing Bergman,” for example, it reflects a sensibility that took enough hold to orchestrate some of his own work (such as “The White Ribbon,” his greatest film, is a triumph of Bergmanian metaphors).

Has any filmmaker ever exhibited that amount of power over such a diverse array of creators? Other than Hitchcock or Kurosawa, few ever spring to mind. Yet here was a man rarely interested in breaking into mainstream exposure either, which adds wonderment to the reality. What touched others so deeply, so intensely, that they were eager to wander into the fringes of international obscurity for the sake of absorbing his ideas? This movie, a posthumous diary of his life, affectionately unearths the probing perspectives of some of his greatest triumphs, allowing his would-be successors to question the “existential vertigo” that continues to mystify them (and us). Some, like Martin Scorsese, approach that discussion with eloquence and persuasion; others, like Lars von Trier – the most vocal of his admirers – find more amusement discussing matters of vulgarity. But they are all bonded by a love for a man that tapped deeper into the membrane of cinema’s soul than any of his contemporaries, and for nearly all of them the journeys of the moving camera seem like a constant pursuit for the same elusive wisdom.

My own first encounter with the Swedish filmmaker occurred in 2002 during a lecture on important cinematographers. Often thought to be the spinal column of many of the great director’s images, Sven Nykvist was the visual interpreter of Bergman’s most vivid early dreams, frequently overseeing them in some of the most evocative shots of their kind. Those discussions involved a cluster of his essential frames – including the famous chess game between Death and a knight of the crusades from “The Seventh Seal” – but they resonated only as far as the interpretations would take them: usually as moments of mere artistic merit. By the time I came around to seeing my first of his movies I was thoroughly entranced by the visual element but fell short of grasping the thematic context of the material. Was I naïve, or detached? Interviews with the likes of Woody Allen, who underwent the same sense of confusion, offer an enlightening perspective on the journey: though all serious students of cinema must eventually deal with Ingmar’s tortured creative soul, rarely does the admiration ever come quick, or easy.

Often, I’ve suspected, it emerges from emotional links. The personal catalyst was “Wild Strawberries,” about an aged college professor reflecting on his long life before he is set to receive an honorary award. Amid a flurry of rather probing images – including a key shot of the protagonist walking down a deserted street, seemingly missing his own shadow – was a message that struck resonating chords: even with achievements under one’s belt, does any of us really matter that much if we have reached the end of a road without love or answers? Somehow the revelation became a bond, of sorts, to the sentiments of its great author, whose other movies no longer seemed to be just collections of great shots: they were probing studies of the soul, usually done in spaces of great silence. As the pictures became more regular, so did the thoughtful observations. He had a strange fascination with focusing directly on the human face, which I found profound; he believed it to be more expressive and revealing than any plot device. And he was also intensely annoyed by the concept of color photography until it became an industry demand, and when “Cries and Whispers” was made, he simply adapted his monochromatic palette to its nature: it consisted almost entirely of red and white, as if shot inside the flesh of its female victims.

If any discussions about Bergman’s trademark styles or themes lack a center, it’s because they exist in resistance to them. Those that walk into his house throughout this rather thoughtful documentary often find themselves, too, at the mercy of meandering contemplations. Few discussions about any movie director, for example, are likely to begin with jovial regard for sexuality and then transition quickly into meditations about death; though his material took steady evolutions towards the absence of straightforward narrative, rarely were the premises consistent with a particular mental pattern. Francis Ford Coppola believes, perhaps, it was because he wrote most of his own screenplays – that in dealing with a lifetime’s worth of religious torment, insecurity and ongoing sexual affairs with many of his female leads, he frequently found himself projecting the peaks and valleys of his identity through his work. At some point, furthermore, an underlying impatience with filmic boundaries gave him license to simply abandon common principles – including the mere use of dialogue (most directly visible in “The Silence”) and the destruction of straightforward narrative arcs (seen in “Persona,” still his most studied endeavor).

Yet I believe the true crux of this footage is not simply to educate one about its great subject – of which there is no room for argument – but to remind one about how today’s great directors, in some way or another, are forever cast in his shadow based on how they regard his endeavors. Most are not likely to be surprised by the presence of Wes Craven in a discussion about “The Virgin Spring” – which inspired his own “Last House on the Left” – but doesn’t it make absolute sense for a master of horror to talk about the concept of death as a living character? Sometimes you are reminded of one’s skill by the way he discusses his heroes. John Landis, a similar filmmaker, takes delight in the fact that so many (including personal friends) are still so at odds with “Persona.” Wes Anderson does a good job in a discussion of Bergman’s early comedies, clearly his most favored. Scorsese still feels inspired by the religious guilt of his later pictures. Claire Denis is moved by the beauty of his spiritual essence. And Lars von Trier minces no words in describing his immense dislike for “Fanny and Alexander,” not long after he waxes philosophical about Bergman’s fascinating with vagina, or before exhibiting anger over never getting to meet his role model before he died. One would not be surprised to learn he has said far less kind things about the actual people that have appeared in his pictures.