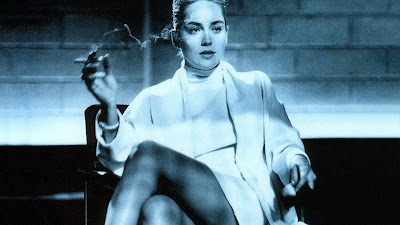 Some, if they are well-acted or directed, can survive the inevitability of ancient value systems; others may just be cheerful in their push for the controversy. But key moments like those contained in the notorious “Basic Instinct” are not so much well-modulated illusions as they are elaborate manipulations of a nearsighted agenda; they exist for the sake of fulfilling the obligations of overzealous Hollywood moguls, none of which have a vision beyond the dollar signs of eager simpletons anxious to see all at a movie theater. Their conviction becomes one of unsophisticated audience satisfaction – are those who show up to an erotic thriller like this interested in the idea of a big star being a crazed killer, or would they rather that distinction fall to a lesser star gliding through the margins? At some point their game of uncertainty overpowers both the shock of bare breasts and the nuance of a deceptive performance, leaving us with the sense that the agendas of these filmmakers were as short-sighted as they were shameless.

Years of skepticism kept me from seeing Paul Verhoeven’s legendary opus, and now after 25 years of constant distancing I have been unwittingly dropped on its doorstep, thanks to a rapid marathon viewing of famous bad movies on a cold icy night this past January. Given all its fame (much of it divisive), one must not forget that its director was, once, the pilot of some of the great blockbusters of the late 1980s (including “Total Recall,” his best), or that he managed to return to the industry after a lengthy absence with some promising distinction (last year’s “Elle,” his first movie in 15 years, was a critical triumph). It would be easy to ask what he was thinking when one is exposed to this mess of an excursion, but that’s exactly the problem: there is no thought. For him, everything functions at a level that is dictated to him by ravenous businessmen with no concept of cinematic perspective. Here is a film so utterly devoid of art and intellect that nothing remains other than a husk of ridiculous ploys.

The movie would be watchable if anyone involved knew how to hold a plot together. The opening scene sets the dubious tone: during a night of intense sex between an old rich man and his well-endowed blond partner (her face is conveniently obscured by her hair), he is restrained with a scarf and butchered with an ice pick. The following morning, hot-shot police detectives who seem quick to reduce reality to soundbites arrive to dissect the crime scene, and suspect that the culprit of the grizzly homicide is the man’s current girlfriend Catherine (Sharon Stone), a beautiful and wealthy socialite living nearby. Somehow, amidst all the suspicion she garners, she also proves to be a formidable player in the interrogation room; a college major of psychology who also specializes in writing murder mystery novels, her early scenes behave with the dual intentions of cunning verbal maneuvers and blatant sexual arousal. The movie’s most famous shot, of a semi-close-up of her genital area while she changes position in a short white skirt, is an embodiment of her fearlessness and the chauvinism of the movie’s hypersexual architects.

The purported hero of the material is a detective played by Michael Douglas, a declining hotshot who has been recently investigated after murdering innocent tourists during an off-duty shooting. In some way the movie sees his involvement with this case as a plea for redemption, though he is too caught up by the indulgence of the scenario to be all that serious in his conviction. The audience, however, is wise to be suspicious; when she claims innocence, it is contrasted by rather blatant implications, including the fact that her last book dealt with a murder that transpired in the exact same way that her murdered lover met his end. There is wordy dialogue that attempts to shift suspicion all while the circumstances point to her as the most obvious suspect, but little of it amounts to much other than lengthy diatribes and circular reveals. They are part of an engine that only has two goals in mind: 1) to keep the audience wondering whether she is in fact the murderer, and 2) occasionally throw in some romps that are a mixture of sleaze and danger (is she going to just rock his world, or is he going to die mid-orgasm with an ice pick to the throat?).

Inevitably the Douglas character will be pulled off the case because of his allure to the suspect, and of course they will take their mutual attraction to the bedroom, but the screenplay also throws in notable deflections, including a naughty federal investigator played by Jeanne Tripplehorn and a lesbian lover played by Leilani Sarelle; when their involvement in the personal lives of the two leads causes emotional bleeds or violent traps, it serves to paint targets on them long enough to make Catherine’s antics seem thoroughly incidental. In most films, you could depend on the path leading towards one specific outlet, or at least a detour that fits within the framework of the developments. But “Basic Instinct” does all this in a whirlwind of uncertainty that adds up to two possible outcomes: either Stone’s character is a cold-blooded killer, or she is simply a bystander in a game she helped to write. And because both resolutions fully comply with the details that precede them, that negates all potential value of the final shot, a reveal that lacks rhythm with basic narrative comprehension. People don’t leave an ending like this feeling satisfied – they leave with the impression that they have been jerked around for two trashy hours, and none of it amounts to anything other than exactly what the studio wants: to rob you of a few hard-earned dollars for momentary arousal.

How in the world did this mess make it so far, or indeed develop the infamy that has followed over the course of two decades? The power of the sex and violence certainly has merit as a sensory impression, but was it actually powerful enough to dislodge one’s awareness of this screenplay’s stupidity? What of the dialogue, written as if it had the IQ of your average fruit fly in mind (“He got off before he got offed”)? Didn’t its admirers look beyond the eroticism long enough to sense they were being played without any serious conviction? Verhoeven and his writer, Joe Eszterhas, were not newbies to this fold, and indeed their union was viable enough to inspire added endeavors – including their follow-up “Showgirls,” one of the most ambitious bad movies ever made. That film, as unsexy and miscalculated as it is, at least acquires a sense of value as unintentional comedy. “Basic Instinct,” on the other hand, is senseless bullshit.