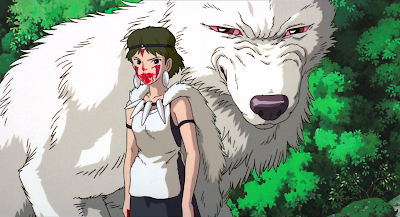 One could argue that potential has persisted in the vague whispers of film circles as far back as the 70s – when more “adult” themes ran the gamut in the pencils of patient movie animators – but its footing remained elusive until it was awoken in the mind of Hayao Miyazaki, the unequivocal genius of his field. An engine of insatiable creative strides has driven him in this dreamer’s profession, and his “Princess Mononoke,” now entering its 20th year, is arguably his greatest: a brilliant visualization of his power and mystique, even as it juggles the details of a rather complicated fable. Somewhere in those scenes, furthermore, is a sentiment that is rooted in the imprint of his great ancestors, evoking the golden standards of Akira Kurosawa in the midst of resounding visual wonder. And because this is an artist who uses animation as the fuel for deep philosophy, one is left with the impression that all of this could have really transpired long ago, in ancient times when storytellers gave birth to their own resonant mythologies.

The nucleus of the film's ambitious premise deliberates the silent wisdom of nature, in the sense that beasts among the trees must carry the burden of order in a world where man can seeks to squander it for selfish gain. Not unique amongst fantasy writers, Miyazaki amplifies that prism beyond human characters; among packs of boars and wolves are animal warriors charged with protecting the forests while men attempt to foster their resources for industry. Their war reaches the intersection of its chaotic possibility when one of those leaders is wounded by a gun’s bullet, and through his resulting madness comes a realization among passive observers that neither world will persist without a connecting dialogue. But who is astute enough to reach a sense of understanding in either side when the battles grow more violent and vengeful, and the logic of others is diminished by a fear that undermines thought?

The hero of the film is Ashitaka, a young villager whose encounter with the diseased boar leaves him cursed to certain death, and inevitably on a path to reach the source of the demonic being’s manifestation. Armed with knowledge that an iron pellet lodged in the animal’s remains is the source, he is guided by the wisdom of a village seer to seek out the origin of that mineral, suspecting that the curse is a catalyst to push his path towards the destinies of the gods. There is a certain approach that Miyazaki exaggerates for the purpose of anchoring him to the distant eras; whereas modern protagonists would be lost in the thrill or sensationalism of their fatalist goals, here is a character that calmly accepts the order of the fates, even as he travels deeper into a situation that unfolds with elaborate precision. What he learned from Japanese folklore is as much of a moral instrument as it is a necessary intervention: the belief that a calm voice is the most influential of all bridges between competing factions, especially one that fears not even death.

In the west lies the culmination of this troubling unrest: a mining community led by the impassioned Lady Eboshi, and a wilderness home to some of the most relentless guardians of the forest. Their dueling endeavors have reached destructive tendencies, amplified in part by a renegade warrior of the wolves known as San (or Princess Mononoke), who sees herself not so much human as a creature cursed to the flesh of a sworn enemy. This creates dueling tensions during the early scenes of Ashitaka’s infiltration of the mining compound; he learns empathetic details of the human settlement (Eboshi provides safety and shelter to lepers, for example), and also comes to regard the strange princess as a being worthy of empathy. Ultimately that situation must be tested when both women come to exchange violence on the grounds of the village, leading Ashitaka towards a crossroads moment: save the princess and fight for the preservation of the forest, or align with Eboshi and allow her mining endeavors to continue unchallenged.

Both perspectives are written to forge the destiny of a single outcome: the potential destruction of the great forest spirit, who walks among the animals as a giant stag by day and as a celestial body by night (their visualizations are among some of the most striking images in any of the director's films). His existence strengthens the endurance of the kingdoms of nature, though opportunists within the human settlements seek to throw that certainty into the shadows of doubt. Eboshi, by her own measures, only wants to gain the upper hand in a territorial conflict, whereas her culprit, an opportunistic slug named Jigo, hopes to acquire the beast’s head and turn a profit from it. The goals of Moro, the wolf god (and Mononoke’s spirt mother), seek to undermine the endeavors of naïve humans, but Ashitaka’s interference adds uncertainty to their outcome. Is his curse by the boar, observed with dread, a sign that he is meant to fight in the name of the natural order? Is it a scar meant to be worn as a mark of example against an order destined to be taken over by civilization?

A good ration of these arguments is developed by perceptive dialogue – smart and pointed, it is rarely superfluous and deeply targeted towards strategy (Neil Gaiman’s English translation simplifies a lot of Miyazaki’s concepts, though a full viewing of the Japanese dub with subtitles is essential for more informed grasp). Likewise, the scenes never surrender to the turbulence of the narrative; though it is obligatory for many of the key characters to get caught up in the urgency of a struggle, there are also a fair share of innocent exchanges amongst silly supporting players (many of the female members of Eboshi’s compound are quick-witted motormouths, for instance). And the material is not stacked in a way that rushes through ordeals or comic relief, either. At 134 minutes, “Princess Mononoke” earns the rare distinction of being one of the longest hand-drawn endeavors of major cinema. But it earns that right; just as thoroughly as the material is delivered, so are the images chock-full of wonder and breathtaking insights. This is a movie that is in the service of high art just as much as it aligns with our desires for exhilarating adventure.

If our admiration stirs us to equal measures of excitement and wonder, then the film’s final act remains a challenge worth contemplating. Miyazaki does an intriguing thing here: he doesn’t end his story over a series of notes meant to serve as a physical climax. He is far more interested in hitting the emotional notes, and often lingers on images that seem invented to reverb with trauma. The most conventional twist comes as Eboshi and her scrupulous understudy come face-to-face with the spirit they seek, but the outcome of the confrontation creates something far more profound: a lingering contemplation of the struggles between man and nature, where they’ve been, how far they’ve come, and what cycles they inspire if the hands of calm voices are not there to bridge their agendas. What is to become of natural order when it is raped by the senseless takers? And what of a mankind that knows only how to take in excess? Those that will go to “Princess Mononoke” one time are doing so as eager adventurers, but those that are incited to revisits are provoked to become more than mere gazers of color and movement. What a gift it is to be reminded of this possibility now, especially when most new voices aim only for the low grade of pleasures.