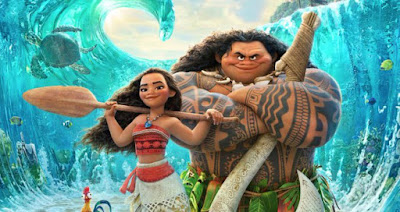 Was it possible to enjoy the film because of its rather vivid and visionary scope? Or were those virtues only masks cloaking the more obvious parallels it shared with “The Little Mermaid” and “Mulan?” However one answers may depend on their patience. Mine was tested, perhaps, because of the tenuousness of early scenes. The story is an echo of that ever-so-familiar journey in which young heroines become restless with the grind of their routines and wander beyond the borders of their world, usually against the wishes of strict parental figures. It is, of course, predestined that those decisions will be for the cause of a happy ending – either personalized for the lead or for the homes they hope to improve – but the road leading to that resolution is inevitably paved with personal sacrifice and life-altering risk. It all must be that way for the sake of preserving the routine, you might say, but what of the dialogue between Moana and her stubborn father, who is personally scarred by experiences on the open seas and refuses to allow his daughter to venture beyond the island reef, where the future of her people may in fact be waiting? Their straightforward interactions could not be any drearier if they had been reading directly from the handbook of simplified movie exposition.

“Moana” does eventually build from these run-of-the-mill misgivings to become passable, at least, and works both as a fable of islander mythos and as an adventure chock full of wit and spirit. Of course the more fluent audience members are going to attach their own footnotes to plot details just as I did, and no doubt many of the story’s most important moments feel predestined by the whirl of a writer’s pen, but at least they have an innocuous intention to fall back on: they aren’t squandered by the flat jokes or one-dimensional characterizations that are a staple of lesser studio output. And much like her predecessors, the heroine is an eager firestorm of conviction who has much to prove, and her sidekick – a fallen deity voiced with sarcastic precision by Dwayne Johnson – is an amusing counterbalance. The movie doesn’t supply them with a grandiose ensemble of comic relief, mind you, but that’s ok; in an island paradise where curses threaten to shroud the natives in a swirl of shadow and smoke, maybe it’s not all that surprising to see a plethora of quirky animals neglect to show up for lighthearted distraction.

Perhaps they are too busy in the grand scheme, especially given what plagues those that do appear on screen. From a young age Moana has had an enduring obsession with the open seas, but her interest has always been stifled by the concerned gestures of her father, the Chieftain of a tribe of pacific islanders. Given the calamity suggested in the prologue of the film, one can see why; after the heart of the islands is stolen early on by a demigod and whisked away from its home, vengeful spirits and elements awoke to wreak uncertain havoc on the waters, ultimately leading to the banishment of Maui (the figure who stole the heart) and the loss of the artifact to the open seas. Years later it arrives in the possession of the lovely island girl during a sweet gesture (she is too young to acknowledge its significance), but years later when crops on her island begin to dry and fish disappear form the reefs, her quirky grandmother – seen as a crazy old woman by others – prophesizes that the ocean is leading her towards a destiny on distant islands.

And so the story goes, page by page and scene by scene, that Moana is supposed to flee in the middle of the night and seek out the source of her quest: in this case, the smart-alec Maui, whose banishment because of his theft has done little to curb his comedic cynicism. To recent enthusiasts of Disney output, he will mirror the wry and witty undertones of the fox character in “Zootopia,” whose blasé acceptance of his fate also served as the source of dubious character decisions; to others, he may just be an animated caricature of its vocal artist, a former wrestler-turned-actor who has earned distinction as, well, being totally laid-back and likable. The legend goes something like this: whoever the ocean chooses to restore the heart, he or she must sail the seas with its responsible possessor (the demigod) and watch on as he returns it to its original resting place; follow-through of this task means that the decaying livelihood of those on the islands will be reversed and life will once again flourish. And somewhere along those lines, of course, the protagonist will learn that her people were once sea-farers, thus encouraging her to change the limited rules of her parents when the ocean once again becomes safe for boats and adventurers.

For a conventional storyline, at least, there’s some surprising artistic delights. The greatest of these is the film’s recurring visualization of water in motion, best viewed in moments when the fluid seems to take on character form and nudge Moana towards something, or when it harbors the presence of an illuminating stingray spirit (whose identity is too precious to reveal in a review). There are also some great moments involving a journey down into a scavenger’s nest that features a sarcastic sea snail, an amusing ambush made by little pirate creatures that resemble coconuts, and a finale with a volcanic spirit that excited me more than most recent Disney endings. The concept was developed and finalized in part by Ron Clements, known for his distinctive contributions to “Hercules” and “Treasure Planet” (two of the more original visual feasts of the modern Disney canon), and here he does not disappoint in creating a space of thoroughly original images.

What it doesn’t succeed in, alas, is projecting the silly self-awareness of a plethora of recent CGI cartoons. The screenplay, devised without obligation to go beyond the boundaries of the formula, retreads to many of the conventional routes, which include the staple conversations about “knowing one’s path,” the obligatory misunderstandings between friends, the last-minute save supplied by a supporting player during a tense climax, and even the typical happy outcome in which the questionable faces are redeemed by selfless acts in the 11th hour. Many of the most famous Disney endeavors make no secret about following those trajectories either, to be sure, but they have the benefit of rousing sidekicks amplifying the humorous counterbalance. Consider the obvious examples. “The Little Mermaid” has a flounder, a crab and a seagull. “Mulan” had a talking dragon. “Moana,” by comparison, has a cross-eyed chicken that in most common-sense situations would be on sale at the fresh meat wall in a grocery store.

Will any of that matter to young adventurers with vivid imaginations? I doubt it. This is the kind of film tailor-made to their sensibilities. And unlike a string of failures consistently supplied by the studios over the last several years, at least someone behind the camera has mastered the formula well enough here to supply the scenes with confidence (something that was sorely missing from, say, “The Secret Life of Pets”). When you get right down to it, “Moana is a film that has the ambition to establish a distinctive look, even though it frequently fails to sail past the safety of its own plot routines. In an age when the standard has ebbed far lower, one can do far worse than taking a trip through the troubled waters of the pacific islands.