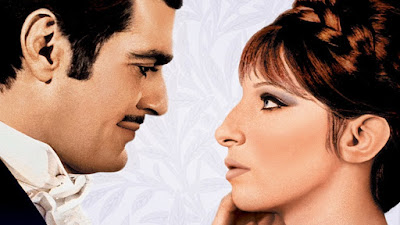 I find it impossible to escape this sentiment as I contemplate “Funny Girl,” the musical and film that announced her as the most captivating star of the times, but it is a realization that must be faced distinctly. We can say a lot about her radiant presence through nearly every frame of this two-hour star vehicle, but what could be observed that already hasn’t been discussed at arm’s length? As Fanny Brice, a seminal figure of the world of pre-depression entertainment, she usurps the very subject she hopes to emulate; her conviction possesses the camera in a pull of exhilarating emotions, and when she sings there is never a doubt she is living the lyrics of the score. But the movie itself, often viewed now as an ambitious vanity project, would scarcely hold up had she not graced its frames. The famous studio musicals of the 60s were frequently in that vein – and more often surrendered themselves to the notion they would only garner their appeal by allowing notable film sirens and heartthrobs to pilot the engine – but some would have been anchored enough to warrant observation in the absence of name value. Here is a movie directed by the famous William Wyler, written by the gifted Isobel Lennart, wonderfully scored by Jules Styne… and yet their contributions would amount to little if Streisand was not there spinning their material into gold.

I had not always detected this aspect of “Funny Girl” until my awareness of musicals expanded, far beyond the notion they could be more than just balancing acts for a single spotlight. Think of how the movies stage them. Usually they contain ensembles of characters, lavish production values and varied focal points – indeed, the suggestion that one persona is never responsible for holding all the attention, even if that person is functioning on the insistence of a more centered goal. But this picture, an anomaly among most old standards, cares almost nothing about those in the backdrop, even in song; they exist to propel their subject towards personal growth and professional endurance, all while she attempts to reason with the strange relationships that populate her life backstage. There is an early scene where Fanny Brice’s assistant finds her seated in the theater, hours before a performance that night. “What are you doing out there?”, she asks. Fanny is somber in her acknowledgment: “it’s the one place in the theater I’ve never sat. Maybe things look differently from here.” It scarcely dawns on her that the viewers never have a chance to indulge her in that possibility; without the constant barrage of musical numbers and closed door insights, there literally would be no story to work with here.

Yet there is a great deal of strength to her excursion as Fanny Brice – some of it sourced beyond the nuance of performance. Brice was the first of what many saw as the “unconventional entertainer,” a natural-born humorist and vocalist who became a star of the Ziegfeld Follies when the audience was all about beautiful blonds and perfectly choreographed production fantasies. While her voice was overpowering, however, her quirk nearly disarmed the very sentiments of the Ziegfeld doctrine; she was one of the first female talents that was in full control of her own career, even in negotiations. A great deal of this reality seemed to carve the walls of Streisand’s own history, especially as she made early waves on the nightclub scene during the early 60s (legend has it she refused to sign her first recording contract unless she had final say over what material she could sing).  Was it by happenstance that she won Brice’s role on Broadway? No more coincidental than it was, perhaps, for Hollywood moguls to discover Marilyn Monroe, or for Quentin Tarantino to put his hands on a movie camera. Some destinies play as they must.

Not a frame of “Funny Girl” goes by where their union is in doubt. The film chronicles her early rise, as a fresh-faced kid from the streets of New York who tried hard to nab a part on the local stage as pessimists attempted to thwart her aspirations – and, through unintended humor, wound up impressing the masses with her sense of presence. That her voice was a stirring force eclipsing all else certainly enhanced that prospect, leading her to a plethora of critical notices – including one by a handsome man named Nick Arnstein, played by Omar Sharif, who was destined to become her husband. In all journeys through the limelight is a source of inspiration that enriches as much as it harms, and Nick becomes Fanny’s damaged muse; their infatuation blossoms, curls back, culminates in romance and then ultimately faces the turbulence of addiction. Somewhere in that realization is a woman who sings songs with conviction but has yet to allow the emotions to take over; when they do, Fanny seems to become less of a force of nature and more an embodiment of the raw spirit of the stage.

The movie’s behind-the-scenes insights are light, but pointed. One of the key sequences comes during Fanny’s audition for Florenz Ziegfeld, the impresario of the musical stage; after landing a job because of the strength of her voice, he gives her the lead vocal duties in a song about beauty. She attempts to negotiate her way out of involvement. Observers are stunned. Ziegfeld refuses to accept no, despite her conscious reservations (“I can’t sing a song about being beautiful. They will laugh me off the stage”). The culmination of their argument occurs on opening night, when she appears on stage as a bride while concealing a pillow below the dress; Ziegfeld is so outraged by the alteration he nearly threatens her career – except that the laughter of the audience propels their interest in a new comic talent. If anything the moment is critical at deciphering the parallels between Streisand and her subject, both of whom were cut from the same unapologetic cloth. Those who would deal with them would not always have kind things to say, but hey, when you’re a woman in a world where man’s ego allows for little elbow room, sometimes wrestling your control away becomes a necessary prospect.

The primary strength is the lead performance. It is not merely enough for Streisand to show up and belt the songs; she believes in the rags-to-riches fable as much as it is her own, and there is a subterranean bond between she and Brice that gives the scenes an air of supernatural prowess. Not a single musical number fails, nor does her voice waver from the grand pitch of resonance. If her interactions with others are shaky, that’s because the film elevates her far above the awareness of her peers. Ultimately that becomes problematic when the screenplay requires Fanny to reason with others – particularly Nick, who in most films would be an eloquent figure but merely drifts off into obscurity by the second act, especially when it becomes obvious that neither Sharif nor his vivacious co-star are convincing as young lovers. Perhaps in a more broad-intentioned musical there would be a point for a minor subplot about gambling addictions, for instance, but here the details act as footnotes in the periphery: simply there to create the sense that life goes on while the star is giving her all in stage performance.

How one chooses to look at “Funny Girl” now will depend on the patience they have for the Barbra persona, and whether they think it’s powerful enough to reduce the significance of the backdrop. For some it’s always been about the staging of the production and the accessibility of the musical numbers. This movie has little of both; it is work of literal individualism, about one woman’s experiences as she attempted to become an icon of the theater. In lesser hands this would fall flat because nothing is written to comfort the supporting players. They are extras with names and blurred faces. But as a moment in time that exemplifies the skill and dexterity of its greatest star, there is no denying the depth of the sales pitch. Here is a woman that remains a force far above ordinary talent, and her debut persists as a fascinating record of those very ambitious origins.

Produced by Ray Stark; Directed by William Wyler; Written by Isobel Lennart, based on her play