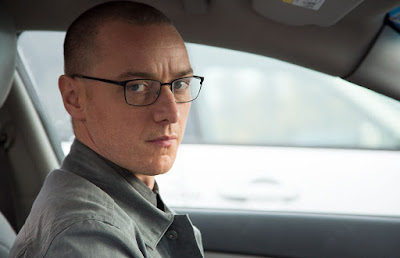 “Split” is a skillful little thriller that keeps these mysteries hidden beyond the sphere of even its key eyewitnesses, audaciously leading us to a climax that had me beset with intrigue and admiration until the very final moments. So rarely has a movie been released this early in the year that has gone to such elaborate lengths to challenge the moviegoer without betraying their trust in the process. And that’s an enlightening prospect given the pessimistic outlook we have acquired going into 2017; after an exhausting year in which the movie climate seemed to suggest overkill or mean-spirited implications (even among thrillers), the divisive M. Night Shyamalan has emerged as an unlikely voice among vehement nihilists. This is a film that will excite as equally as it will shock, and yet the most startling surprise is the realization that it comes to us without fanfare or buildup, by a man whose common trajectory has often been to startle us for far less resonating reasons.

Wherein lies the difference? A bit of research into the consensus of my peers reveals a key component in dealing with this latest twist. One internet movie critic muses: “Shyamalan’s confidence works better when psychology is the focal point of his stories, but when his camera turns outward – as it does in world-driven chaos vehicles like “The Village” or “The Happening” – his characters drift beyond the fog, leaving behind only the painful realization that his ideas have devolved into logical nightmares.” What that implies, perhaps, is that the famous filmmaker began to lose sight of his strengths with the evolution of his craft – that starting with “Signs” he spun his wheels away from the intrigue of his fragmented personas and became too obsessed with the dilemmas of the world without bringing them close to substantial plausibility. Some of them carry the mark of a great master of tension – the early scenes in “The Village” still exemplify a skill for atmosphere, for example – but rarely the finality of an aware storyteller. “The Visit” from 2015 attempted to nullify these weaknesses, and indeed has its inexorable merits, but “Split” sees him elevated back into the veil of the serious contenders.

A sizable ration of that victory comes down to the perceptiveness of the writing. Working from a screenplay which features serious discussions on the nature of mental illness, Shyamalan takes us to the epicenter of a theory while wrapping it in the cloak of an effective race against time. The villain (if we must call him one) is Kevin (McAvoy), a patient of Dissociative Identity Disorder who has become the pet project of Dr. Karen Fletcher (Betty Buckley). We meet her in a moment that follows her patient’s apparent descent into dangerous practices; after snatching the three girls from the parking lot and imprisoning them, he arrives at her doorstep for a lighthearted discussion about fashion designs. Fletcher, accustomed to a steadfast routine of the dominant personality, suspects something is amiss. He says nothing is out of the ordinary, which only adds to the suspicion: why would he send her an email asking for a last-minute meeting just to discuss new sketches? The dialogue has an air of formality, as if to sidestep the underlying tension, but only because it must establish the good doctor’s faith in her patient’s intricate ailment. To her, multiple identities are not simply a suggestion of great internal trauma – they are a signal of an evolutionary advancement of the human psyche, and one that ought to be studied without the fearful stigma frequently associated with such cases.

To her, and to Kevin’s victims, several of these personalities carry distinctive connotations. Barry, the designer, is calm and approachable in counselling interviews. Dennis, responsible for the abduction, is vehemently OCD and has a penchant for watching young girls dance in the nude. Hedwig is a 9-year old whose curiosity underscores his attempt to strike up friendships with the frightened prisoners. And Patricia, a prim and proper sort who implores kindly gestures, exhibits a sense of cunning that gives her an air of menacing detachment; the girls see her not as a source of kindness but as a time bomb of manipulative danger. Because one cannot predict who exactly gains control over Kevin’s body at any interval, that adds ambiguity to the tension. What should transpire when the girls attempt to stage an escape through the air vents above their room? What happens when one of them is caught after attempting to overpower her abductor with a wooden chair? Conventional thrillers suggest that we ought to expect great harm (or even death) to befall these characters the moment they act out, but such is not always the case with “Split.” And that certainly complicates matters later, when another personality known as “the beast” threatens to emerge; will those who act out be the ones who undergo the most suffering, or are all three of them destined for the same grizzly fate?

The heroine Casey (Anya Taylor-Joy) thoroughly satisfies the screenplay’s need to create a source of empathy. As she observes the events before her transpire with unsettling precision, the movie jumps routinely back to key moments of the past involving her father and uncle, both of whom have influenced the detached demeanor of her teen years. But there are also narrative benefits to these transitions, including some contrasts that make her current crisis seem inevitable as a final destination. Consider a flashback in which young Casey is seen holding a shotgun barrel towards her uncle; this is a framing device for the climax, featuring a chase down a long underground hallway which ends with both her and her captor caught in the same positions. Or another moment when said uncle is seen leering possessively over her after a death in the family; is this present aggressor really all that different from a relative who frequently exhibited dichotomous faces of his own? Of course those experiences also mean she is likely to be the film’s most logical of victims, but that’s not where it ends, either. She engages Kevin’s personalities by adapting to what she observes in their behaviors, and though that puts her in the crosshairs of harm, it also lends credence to the notion that childhood trauma may, indeed, be the root of surviving any subsequent nightmares that might transpire.

Shyamalan balances her reality with the conviction of a thorough case study, made all the more intriguing by how it never resorts to cheap thrills or implausible scenarios. There is something quite admirable, too, about how thorough his perspective remains even as the material treads the line of violent torment. The psychiatrist character is smart and observant and not used to propel ham-handed theories about the lead’s disorder. The Kevin character acts in precision with the narrative of his disorder, and when the story inevitably pushes him to the brink of a troubled existence, McAvoy conveys it with brutal sincerity. And the ending – the most prevalent weakness for this director – works perfectly with the foreshadowing that precedes it; the final reveals are not contradictory to the mood nor undermine the purpose of the journey, which most may find to the most rewarding of qualities. What “Split” says above all else, perhaps, is that one’s mistakes ought not to be indicative of a decline; perhaps they can become part of a destiny to discover an even more rewarding voice buried within. If the failures of a handful of the director’s most famous works are examples of that, one can only assume this latest example being just as much an epiphany for him as it is to his audience.