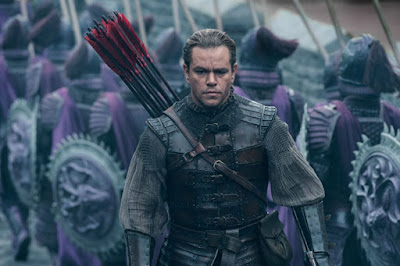 The movie suffers from what we affectionately recognize as the “Starship Troopers” sickness, in which special effects gurus are tasked with the rescue of a plot that is set adrift with moronic simplicity. Rarely do they succeed as salvaging a concept, however; by then, the endeavors of the writing have proven to be an unyielding death sentence impossible to recover from. But at least some – like, for instance, the “Jurassic Park” sequels – have the benefit of inspiring some level of visual wonder amid their dimwitted concepts. “The Great Wall” is not just an ambitious gorefest, but a rather murky one; the images are often swift and indistinct, and the primary villain may very well go down as the ugliest movie illusion seen on screen since the slimy blobs of “Alone in the Dark.” Who on Earth thought these would make convincing antagonists? Better yet, what gave the writers an inkling to reduce all acknowledgments of their origins to a mere blurb of reference in the first act? One does not descent into a narrative crisis by watching these scenes, they become imprisoned by the fragmented ideas of scribes totally uninterested in consistency or explanation.

The film stars Matt Damon as William, one half of a duo of European renegades wandering the Asian countryside, whom during a pursuit of “black powder” become caught in a series of violent setbacks: first with vengeful bandits, and later with an unseen creature lurking in the dark. Their misfortunes ultimately lead them to the doorstep of the “Nameless Order,” an army perched atop a vast wall sweeping the countryside who have been tasked in protecting the borders from villainous outside forces (not to mention making sure their uniforms are always on display in vibrant color). The most current predicament, we soon learn, is framed by a cycle of repetition; every sixty years or so, a vast army of creatures known as the “Tao Tei” descend on the well-guarded walls in an attempt to dismantle them, with each new attack being harder than the last thanks to an evolutionary trend affecting the brains of the monsters. A few brief dialogue exchanges attempt to explain those characteristics, but the camera pays them no emphasis; to these characters, words are just a formality to fill in the scenes where they are standing still, and like vapor they enter your mind with no prospect of lingering for exposition.

The order, supposedly “secretive” with their mission, imprison William and his cohort Tovar (Pedro Pascal) for potential interference. While on the perch of the wall, they are spied by the mysterious Ballard (Willem Dafoe), a white man who, we suspect, exists for the same reason as suggested by others: once you become a prisoner of the army, you’re destined to be there till the end of your rotting days. But it turns out, not surprisingly, his motives mirror those of his confused peers: once obsessed with the idea of fleeing with the gunpowder they store, he sees the arrival of these younger men as a golden opportunity to capitalize on his long-stalled agenda and find actual freedom while they are busy in battle. But William, ever-so-obsessed (at least quietly) with that long-standing tradition of emerging as a selfless hero in the 11th hour of the conflict, rushes to the aide of his Asian captors just as the Tao Tei silently gain an upper hand against the order. This reflects almost too positively in the eyes of generals and commanders, who after one impulse go from being suspicious to grateful, as if ignorant to the possibility of the ulterior motives of calm outsiders.

I don’t know what is worse: the action sequences in all their absurdist glory, or the quiet moments when the actors are painting over their discomfort with mutilated formality. So boring is the dialogue, in fact, that our eyes and ears are often allowed to wander beyond the straightforward details. One of the most nagging belongs to Matt Damon, who is playing European but allows his accent to fluctuate uncontrollably; first it sounds American, then Scottish, and then Irish – usually in very brief episodes. Then our confusions become informed by the superfluous suggestions that flood the edge of our minds. Was he working from different versions of a script? Was he forgetting in the moment that he was supposed to even have one? At least Dafoe and Pascal are more consistent with their approach, though they are relegated too deeply to the background for anyone to notice. There is a scene towards the climax in which Ballard is ambushed by bandits, and he meets his end in an accident so abrupt that it feels like a last-ditch attempt for the writers to tie up loose ends, without actually making a more thorough commitment to the famous faces it employs.

That is the least of the movie’s concerns, however. We can accept characters – even those in the background – lacking the basic comprehension traits in situations this large in scale, if they are fighting for something of substance. But “The Great Wall” has nothing to offer anyone in the audience, other than two long and dreary hours of well-staged nonsense. All the technical merits are there, and someone in preproduction was clearly paying attention in how to choreograph actors in dramatic battle sequences, but they don’t come together for a common cause; they are simply an exercise used to perpetuate the illusion that something significant might be happening on screen. The climax, which is barely a culmination of anything that comes before it, lacks a central focus. And when there is an epiphany among the key characters how to overtake the villain in a battle that lacks all sense of hope, the camera barely has the enthusiasm to show us a payoff; it all ends rather abruptly, as if aware no one watching cares about anything other than leaving the theater with what’s left of their dignity.

The director is the talented Yimou Zhang, whose filmography contains three of the most visually triumphant spectacles of the past 20 years: “Hero” (his greatest), “House of Flying Daggers” and “Curse of the Golden Flower.” But what possessed him to abandon such a steady hand for the sake of making such a haphazard mess? My guess is money. There is value to having Zhang’s name attached to a project, especially in his native China, where the market is starved for fresh perspectives on some of its central legends. The screenplay, alas, is not on board with those goals, a mistake that seems reflected in the fact that it has three writers at the helm; the material feels at war with itself, uncertain as to whether the outcome is important, the development of relationships or the evolution of personalities facing less significant agendas. What is certain, especially by the end, is that Zhang is functioning here as a puppet in a game of misplaced egos. If “The Great Wall” does not emerge as one of the worst films of 2017, the road ahead may very well be paved in the tears of the betrayed optimists.