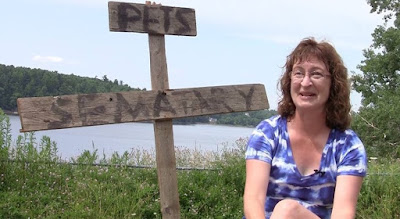 There is something charming about the latter scenario, an approach that I must regard with certainty as I attempt to discuss this undertaking in the wake of revisiting its very flawed source. Here John Campopiano and Justin White, the meticulous directors, find parallels to a host of other documentaries about the inner workings of the motion picture creative process – including “Best Worst Movie,” an amusing excursion about the star of “Troll 2,” who has gained notoriety for his association with the most colossal failure of them all. The difference, perhaps, is that those in said picture knew they were partaking in discussions about an undeniable turkey. So there is a paradoxical implication that informs much of what you see in “Unearthed and Untold,” which is less about infamy and more about the creation of a loyal context to pigeonhole their opus in. Actors, writers, producers, technicians, fans and even extras turn out to inform this milieu, all for a movie that was made on a shoestring, shot outside of conventional locations and was savaged by critics after it been repeatedly pitched at meetings with little enthusiasm on part of studio heads. The most ironic of those implications may also be the most unflattering of Hollywood realities: in the midst of already questionable judgment, how troubled must the system have been for even short-sighted executives to take one look at this screenplay and sneer?

It was the famous writer’s strike of 1988 that proved to be the undoing of their stubborn conviction, allowing the path for “Pet Sematary” to become a reality. Co-written by King himself, the screen treatment had come to notice in a rather narrow window of public disinterest, a time when many felt that the prolific author of horror stories had already seen his greatest work behind him. The book, nonetheless, was an island in a sea of perceived monotony; told from the perspective of a family dealing with great family tragedies, it drew on the emotional energies of its readers and projected them into a scenario with no easy answers. If the gray areas have always been the scribe’s strength, then it is little wonder there was underlying enthusiasm from fans – because what they were discovering in those pages went to the heart of the most universal of childhood traumas: the death of a beloved pet on the road. Mary Lambert, then a newbie to directing films, was no doubt picked because of her persistence with strong themes based on her early contributions to music video, and she filled her screen with good actors with likable faces. To us it becomes something of an obligation to share in the stakes of their outcome, as if they might find comfort in the notion someone outside their predicament is listening in and offering empathy.

Those in front of the camera for this documentary use such rhetoric to discuss the creation of the film ad-nauseum, though the more obvious discussion points are left unspoken:  namely, that “Pet Sematary” is not a very good film, and lacks the pacing to substantiate many of its underlying arguments. But a great many motion pictures earn their cult status despite the criticisms imposed on them, and once we accept this reality as part of the experience, the on-screen discussions begin to emerge in a fascinating new light. Consider the dialogue of its young star Miko Hughes, who at a mere two years old was far too young to understand the implications of his performance; in candid interviews we discover the mind of a very easy-going adult, who now looks upon his experiences with some level of emotional distance (he would eventually repeat such a performance years later, playing the troubled target of murderous nightmares in “Wes Craven’s New Nightmare”). Was this because of his demeanor, or greater endeavors implored on set? Others recall an on-set family in affectionate discussions, where we learn how far they went to ensure an easy-going experience despite the gravity of his involvement. Some child actors in horror films rarely share affectionate words of what they consider the “ordeal,” but here stands a man unaffected by such possibilities, certain he was having fun, and now looks upon the time with all the respect of a true professional. Think for a moment about other famous kids in such films who were far more aware of their contributions and you see how the process can change the course of growth for these minds, for better or worse.

The remainder of the film functions as a reconstruction of its origins, beginning with early story conferences to casting and eventually to on-set antics, sometimes with the very people who assisted in building the sets. One of the more fascinating anecdotes involves a discussion about the façade of the house that burns down in the film’s climax; behind those walls was a completely different house, visible by two sides, which had been shot around strategically to create an elaborate outdoor illusion. When the moment came for the façade to go up in flames, countless others stood in the background to prevent the fire from spreading to the actual foundation – something that wasn’t nearly as successful as it should have been. Then there are also visits to the grounds of the home of the Creed family, where we learn that the famous tree was relocated there from an alternate source for expository reasons (it later died and was removed), and the elderly couple living there only agreed to loan the property out for filming provided they could stay on the grounds at the time and observe the production from nearby. The common bond of these recollections, perhaps, is that the struggles originated based on unorthodox location. Though many of King’s stories take place in New England, very few of them up to that point had been shot there; they had mostly been byproducts of back studio lots constructed to resemble the colonial architecture.

A great deal of this insight is rich in intrigue – both for those interested in film process and those who have some personal stake in the source – and that may be what Hollywood needs the most of its truth-seekers: an unfiltered view of literal creation, far removed from the inevitability of what is destined beyond the release period. Are any of those present for the interviews arriving at a conclusion that we overlook in the original material? Of course not. The source remains joyless and depressing, and I am not alone in those feelings (King’s own absence from this piece is telling, to say the least). But that’s never the point of a revisit of this nature, nor is the excursion amiss; these people show up because something memorable occurred to them in those months in 1988, when hopes and aspirations were alive in all those present, and their energy remains unsullied even by the very ambivalence that cast their efforts into the doldrums of horror movie obscurity. Greater filmmakers have seen worse, and like anchors of gloom their failures drag the bottom with no hope of finding silver linings. “Unearthed and Untold” succeeds at an unlikely test first discussed by Gene Siskel, who believed that documentaries about bad films could be far more interesting than the results they yield.